President Donald Trump has threatened to cut aid to UN member states who vote against US at the upcoming UN General Assembly on the issue of Washington’s Jerusalem move. He said the US will save “billions” in the process.

His threats come ahead of the rare emergency special session of the UNGA scheduled for Thursday. Arab and Muslim countries requested the meeting after the US vetoed a UN Security Council resolution to rescind Trump’s declaration of Jerusalem as Israel’s capital. Trump went ahead with his controversial declaration earlier this month despite multiple warnings against doing so, drawing international condemnation and stirring protests from Muslims worldwide. US President Donald Trump holds a cabinet meeting at the White House in Washington on 20 December 2017. © Jonathan Ernst / Reuters

At the UN we’re always asked to do more & give more. So, when we make a decision, at the will of the American ppl, abt where to locate OUR embassy, we don’t expect those we’ve helped to target us. On Thurs there’ll be a vote criticizing our choice. The US will be taking names. pic.twitter.com/ZsusB8Hqt4

On Tuesday, the US envoy to the UN, Nikki Haley, sent a warning letter to the member states, saying the US president will take the voting choices on his landmark Jerusalem decision “personally.”

“The President will be watching this vote carefully and has requested I report back on those who voted against us,” Haley stated in the letter.

Haley voiced a similarly non-subtle warning on Twitter earlier: “We don’t expect those we’ve helped to target us,” she stated, threatening that the US “will be taking names” of those “criticizing” Trump’s Jerusalem decision during Thursday’s vote.

The unanimous support for the resolution in the UN Security Council was an “insult” for the US, Haley said after vetoing the resolution. It “won’t be forgotten,” she added. The US was the only state of the 15-member council to oppose the resolution.

“It’s one more example of the UN doing more harm than good in addressing the Israeli-Palestinian conflict,” Haley claimed.

Trump’s Jerusalem move, however, has already drawn criticism from a host of countries which said the declaration itself was destructive to the Israeli-Palestinian peace process. Two days after the US decision, Palestinian President Mahmoud Abbas refused to meet US Vice President Mike Pence, stating Palestine will seek a new mediator for the conflict.

The leaders of Muslim countries, who gathered for an emergency summit of the Organization of Islamic Cooperation (OIC) in mid-December in Istanbul, stated that the US decision effectively voided its status as a mediator in the decades-old conflict, and called for world-wide recognition of East Jerusalem as the capital of Palestine.

Hehe, all of those prostitutes countries in the east are sweating from working overtime now :D.

They all have a dose of the American Clap :)

you would save even more billions by not giving foreign aid to ANY coutnry, INCLUDING israel, you retarded orange ape!!!

“81% of Americans Oppose “Aid” to Israel”
Yes, and he (Trump) is already cutting its aid and welfare on them.

Axis of Resistance
Reply to  RichardD 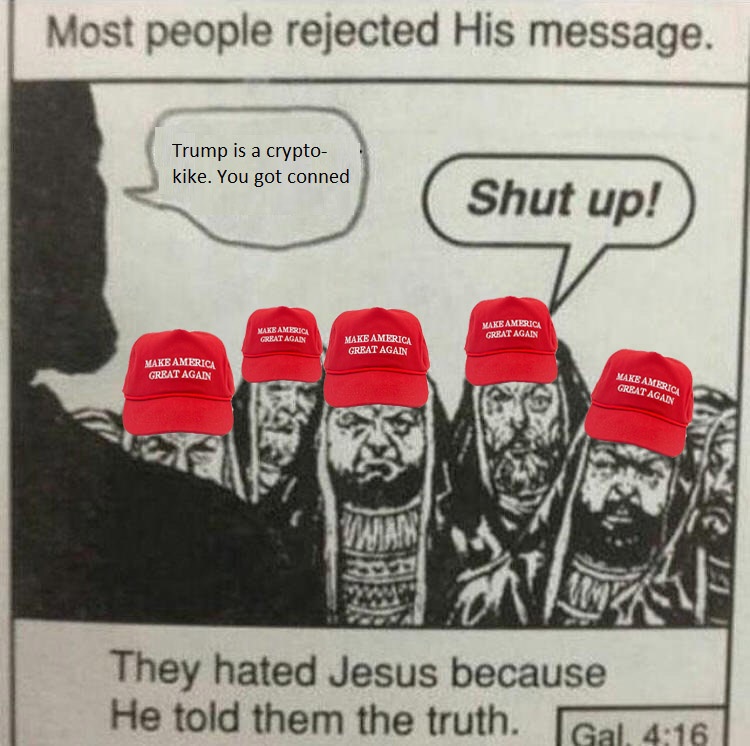 I agree, I’m one of the “81%”. However, I think it’s even higher. The UN has become a playground for American interests, and weapons like blackmail have always been prevalent. True isolation (policy path the the U.S. has been going down for a while) is on course. When nations with a backbone actually find the courage to flip-the-switch, Trump’s proverbial rants may become a reality. Let the U.S. and Israel start their own unilateral outfit. Now if subservient nations are unable to step up to the plate, then they deserve whatever is being given out (In my opinion).

83% of the planet’s Jews live in the US and Israel, another 12% in France, Canada and the UK. The ideology is rotten. They’ve been expelled from everyplace that they’ve been for the past 3,000 years. This is a critique of it by Jews themselves:

– Even Jews Ask: Is Judaism a Satanic Cult? –

“Anton Szandor LaVey, was an American-born Jewish self-promotion artist and intellectual … He authored a book called the “Satanic Bible””

Yet. lying Nikki claim she is “working for America”.???

US Democratic Values are wonderful :). When the US is voted down ,she does not accept any other opinions, she just takes away the bat and the ball and flounces off in a huff muttering ‘ I’m gonna getcha for this, see if I don’t, nah nah nah.

I say stop all aid to all countries. It’s nothing but corrupt bribe money for corrupt favors anyway in which most never reaches the people.

As for the UN, it’s becoming a globalist NWO world government bent on destroying national sovereignty of every country in the world and needs to be pruned back massively.

The UN doesn’t need rogue states like USA and israel.

Please do it so the UN can now be impartial.

Whenever US has wanted a resolution to go it way in U.N. they threaten its dissenters, as in last US Iraq invasion,.where US Ambassador staff accompanied by US military LIASONS of their Sovereign Ambassadorships in those nations, that after the vote they walked up to nations IN ambassadors while still on council floor with these words:
“THAT’S THE MOST EXPENSIVE VOTE YOU EVER MADE”,
In US everything is for sale,at the right price, kids, wives, guys assh… or his mouth, careers and IN GOD WE TRUST $’S.
You are talking about an E-book President who has always got what he wanted through money,; BRIBES, dirty business deals, laundering overseas investors stolen funds, bribery of officials to mayors, govenors, all the way up to President (Clinton) and other governing officials, he’ll he pays his wife under a contract, Contract wives are actually quite common within top 28%financial class.
Sad to say but U.N. has for years been bought by US, It is easy to threaten a yes vote against Israel for two reasons, US will increase $aid for NO, and you can appear as honest while all the while knowing US/Israel will get their way.
Trump has no idea of ideals, honesty, morality or even honorable intentions, all he knows is win or destroy ones co.petitor.
In other words he thinks He is owner, boss, CEO of world’s largest Corporation ( and in reality he is) so that what he says must be done and if not he will remove you.
That has been his modus operandi his whole life.
He has never in life been in a physical fihht, and now he is most powerful man in world who has surrounded himself with American icons, military uniform, and others of his ilk who now want To use that power not so much to become rich, for it is power they crave, and in US you get money for flexing Military or economic power which women and men no better than sluts will cling to.
Trump and Christian Zionist are just plain out of touch with reality, they are just plain F ‘N CRAZY.

Hehe
Yup, this is an to put it in an more sane context and remarkable good idea, yeah, why not help the Imperial Banana Republic, UssA, with some sore needed cash, you know, but naked, and the poor schmuck us freezing, I hope we, in all humbleness does as the Man says, everybody, should be so kind and gentle to do just that, in this Christmas times, and eh….. if I dear, say, white Christmas, Yeehaa, why not, its after all, an humble request, from an captain on an sinking ship/t.

Be an sport, and ban ISISrael, it will even be an good thing, two flies in one uh… smack.
Why not.
And I hope the Waffle Queen of staggering nonsense, this was what, an “threat” Missy, and whats next if this, slides the other way, aka backfires, hold your breath to you turn blue, and see if we care.
After that, what, I am so excited, that I hardly cant wait, yeah, if she poops, whats then to experience in real time, even an alien wouldn’t get me out, what, I have seen it all, and, its just been confirmed, the universe is absolute bonkers.

The road to national sovereignty is clear. PNG all (all!) US “diplomatic” personnel; arrest and deport all (all!) US/NATO “NGOs,” then arrest and imprison all (all!) domestic citizens who had anything to do with them. Repudiate any and all loans from WB/IMF, etc. (all the same thing — the FED). Dump USD. Refuse port calls to any and all US flagged shipping. Close airspace to any and all US aircraft. Nationalize all US corporate interests. What the world needs is USExit.

The Unites States has run significant financial arrears with its contributions, as a member state, to the United Nations for decades. The Obama administration actually did pay off nearly half a billion dollars in long term outstanding financial arrears back in 2010. But the US still owes nearly $800 million in outstanding contributions to the UN’s past and ongoing budget operations, peacekeeping programs and other items.

Haha this is funny as f***! We’ll see who sells out for the US aid. Uncle Trump is so entertaining! thank you Americans for choosing this clown to be president
Grap em by the p*****!

This is great, he is exposing the racist supremacist global Jewish confederate slave empire for all to see! Even the most brain washed Goyims will get it As it is a slave empire, it needs secrecy and darkness to survive, for the slaves to falsely believe they are free and it will die in the light of goodness and truth

Americans always lie. Its the opposite. WE will save $billions if the Yankees go home.
Get out Trump and take your grey mouse with you.

US hypocrisy on democracy and UN votes against Jewmerica and Israel is embraced by Trump and the vast majority of US legislators. The votes aren’t even close in most instances, they’re overwhelming or near unanimous. And are firm;y based in both morality and law.

So now they are threatening the UN security council for their agendas. Fuck you US fuck you and this Trump is evil pig, he will make the world burn, he has nothing to do with politics, all this for him is some sort of a business not a politic or country to run. Idiot…

Nikki
Halley got paid $250,000 from Jewish american Sheldon Adelson/ $50,000
from Koch Brothers/ and $1,000,000 from Jewish groups within the U$A
yet, she claims she is working for “America”. I find that hard to
believe????TRAITOR. $Chumpinstein is also funded by Sheldon Adelson and AIPAC and lost ..hehehe! Both of them cannot speak english properly. 2 clowns! Nikki Halley;the best echo chambermaid the JEWS bought! Cannot deliver!