The last week has seen a lot of reports from the oil industry. The IMF made a forecast, which sees Saudi Arabia bankrupt by 2020 if the oil price would remain on its current level. The low oil price is also creating difficulties for US shale oil producers, which lose more money than they actually make and therefore have amassed large debt. Meanwhile Russia has advanced to be Chinas number one crude oil supplier with the two nations expanding energy cooperation. China is lowering its interest rates to aid its economic recovery while the US investors are warning congress before the looming bankruptcy by November 3rd. 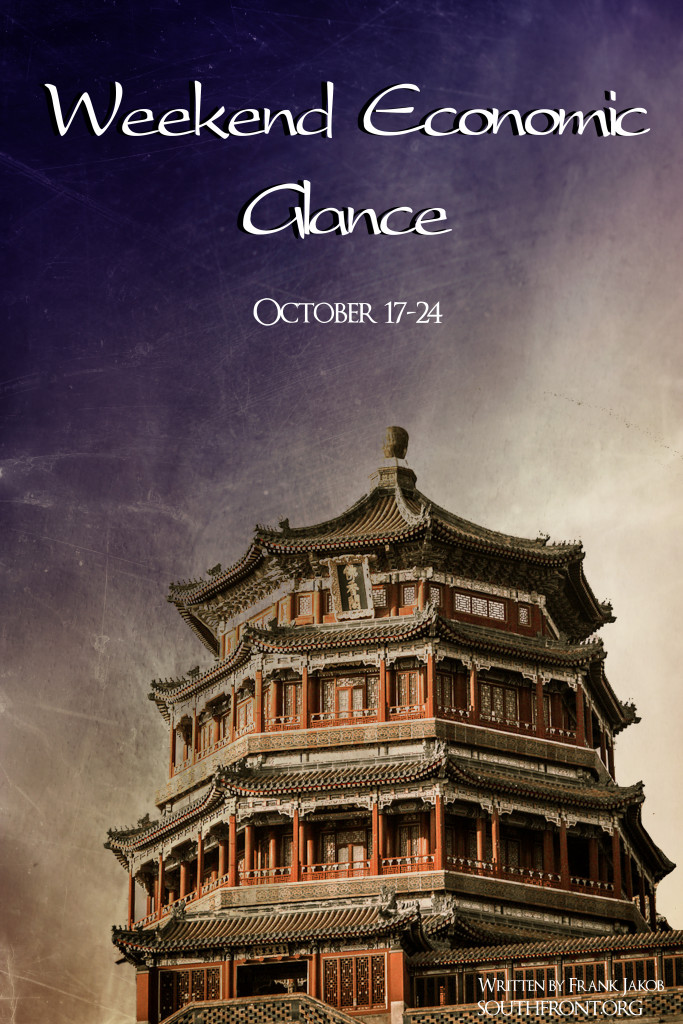 Written by Frank Jack
IMF Report says Saudi Arabia could be bankrupt by 2020 if oil prices remain low. A recent report by the International Monetary Fund (IMF) aimed at forecasting the regional economic outlook of the Middle East and Central Asia region has found that the current level of oil prices poses a significant danger to the Saudi economy in the short to mid term. Should the country not adjust its current policies then it will run out of financial assets during the next five years. Saudi Arabia is currently facing a budget deficit for the first time since 2009. The country is almost completely dependent on the export of oil. Rather than to diversify the economy the country has simply spent all the earned cash on luxury or prestige holdings like Mercedes shares. The country’s net foreign assets fell by about $82 billion from January to August. The government sold state bonds worth $15 billion (55 billion riyals) this year. Yet despite this development the OPEC, a cartel controlling 40% of crude oil production, did so far not limit its output in an effort to increase the oil price. It seems like Saudi Arabia is trying to increase its market share especially on the European market in a bid to increase political leverage. According to Rosneft CEO Igor Sechin, Saudi Arabia has cut prices in the past in order to secure Poland as its new market.

China lowers its interest rates to 4,35%. The Chinese Central Bank has lowered its interest rates in an effort to account for reduced growth. The move comes as no surprise since the central bank has already announced weeks ago that it planned to support the economy. Meanwhile the mandatory stability reserves for banks were reduced. These reserves are mandatory by law so that banks are more resistant to stress in situations of national credit crunches as seen in the EU during the financial crisis in 2008-2009. After all the hysterical talk in recent weeks of a “hard landing” of the Chinese economy it looks as like the situation is much more relaxed now. Chinese authorities were accusing foreign news outlets to purposefully spread panic among the Chinese markets to destabilize the economy. Western news outlets joined into the choir of pessimists and also reported the bleakest future scenarios, even speculated about an investment bubble, something we now know were completely hysterical and unrealistic scenarios. The resulting panic caused billions of dollars of outflow of financial assets while a fundamental reason for the market upheaval could still not be found.

Investors warning of looming US default. More and more investors urge the US congress to act swiftly in order to avoid a potential bankruptcy of the country. There is a growing anxiety among bond investors who fear excess volatility in their portfolios caused by market upheaval as the deadline approaches. The national debt is currently lawfully fixed at a maximum of $18.1 trillion dollars. Congress has to lift this restraint by November 3rd in order for the state to be able to take on new money. This situation has repeatedly occurred over the last couple years and last minute agreements were always reached. So it is not a matter of whether congress actually folds. It is more likely that the last minute pressure is willingly built up to bring the congressmen into a stressful situation in which they would sign anything as long as it keeps “America” afloat. This is just one of many tricks that are constantly being used to fight internal wars inside democracies.

Russia becoming China’s top crude oil supplier. According to recent Chinese customs data Russia has overtaken Saudi Arabia and therefore became China’s biggest supplier. Beijing bought 4.042 million tons of crude oil from Russia last month, which is almost 1 million barrels per day. The volume is up 42 percent compared with the previous year. Imports from Saudi Arabia dropped 16.5 percent on year at 961,710 barrels per day (bpd). The fall was blamed on a hike in Saudi official selling price and the closure of several large Chinese refineries for planned overhauls. China’s Russian oil imports grew 30 percent annually to about 810,000 bpd in the first nine months of 2015, according to data released. Moscow and Beijing have increasingly been working on their energy cooperation in recent years. Two years ago Rosneft and CNPC signed a 25-year oil deal worth mindblowing $270 billion.

US shale producers getting buried in debt. The US shale oil producers are having a hard time of coping with the low oil price. This has been previously reported by Bloomberg but has now gained new actuality in the current market setting. According to Rosneft CEO Igor Sechin the breakeven price for the difficult to extract shale oil lies between $85-$98 a barrel. Right now it is around half of that. Despite that, Sechin insists that it is the United States who controls oil price and not the OPEC but they still do not reduce oil production in order to support the oil price, hinting at a hidden agenda.