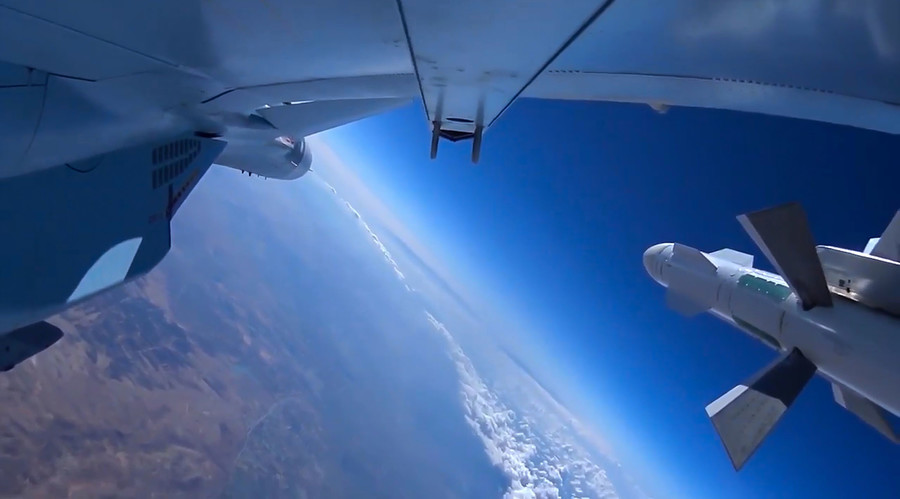 A Russian Aerospace Force jet during a combat mission in Syria. © Sputnik

This column was written by TheSaker for the Unz Review.

The past week saw no decrease in the tense confrontation between Turkey and Russia over Syria. While Russia’s position is simple – ‘we are ready to fight’ – the Turkish position is much more ambiguous: Turkish politicians are saying one thing, then the opposite and then something else again. At times they make it sound like an invasion is imminent, and at times they say that “Turkey plans nounilateral invasion”. Since a UN authorized invasion of Syria will never happen, this means some kind of “coalition of the willing”, possibly NATO. The problem here is that the Europeans have no desire to end up in a war against Russia. At the same time, the US and France refuse to allow a UN Resolution which would reaffirm the sovereignty of Syria. Yup, that’s right. The US and France apparently think that the UN Charter (which affirms the sovereignty of all countries) does not apply to Syria. Go figure…

There are persistent rumors that top Turkish military commanders, categorically oppose any attack on Syria and that they want no part in a war with Russia. I don’t blame them one bit as they understand perfectly well two simple things: first, Turkey does not need a war, only Erdogan does; second, when Turkey is defeated, Erdogan will blame the military. There are also signs of disagreements inside the USA over the prospects of such a war, with the Neocons backing Erdogan and pushing him towards war just as they had done with Saakashvili while the White House and Foggy Bottom are telling Erdogan to “cool it”. As for the Turks themselves, they have shelled Kurdish and Syrian positions across the border and, on at least two occasions, a small military force has been seen crossing the border.

From a purely military point of view, it makes absolutely no sense for the Turks to mass at the border, declare that they are about to invade, then stop, do some shelling and then only send a few little units across the border. What the Turks should have done was to covertly begin to increase the level of readiness of their forces then and then attacked as soon as Russians detected their preparations even if that meant that they would have to initiate combat operations before being fully mobilized and ready. The advantages of a surprise attack are so big that almost every other consideration has to be put aside in order to achieve it. The Turks did the exact opposite: they advertised their intentions to invade and once their forces were ready, they simply stopped at the border and began issuing completely contradictory declarations. This makes absolutely no sense at all.

What complicates this already chaotic situation is that Erdogan is clearly a lunatic and that there appears to the at least the possibility of some serious infighting between the Turkish political leaders and the military.

Furthermore, there appears to be some very bad blood between the USA and the Erdogan regime. Things got so bad that Erdogan’s chief adviser, Seref Malkoc, said that Turkey might deny the US the use of the Incirlik Air Base for strikes against ISIL if the US does not name the YPG as a terrorist group. Erdogan later repudiated this statement, but the fact remains that the Turks are now directly blackmailing the USA. If Erdogan and his advisors seriously believe that they can publicly blackmail a superpower like the USA then their days are numbered. At the very least, this kind of irresponsible outbursts shows that the Turks are really crumbling under the pressure they themselves have created.

Still, the fact that Turkey has not invaded yet is a tiny minute sign that maybe, just maybe, the Turks will give up on this crazy notion or that they will limit themselves to a ‘mini-invasion’ just a few miles across the border. The military would probably prefer such a minimal face saving option, but what about Erdogan and the crazies around him?

Maybe the Turkish military ought to realize that the country is ruled by the madman and do something about it?

Still, the Russians are taking no chances and they have put all their forces into high alert. They have very publicly dispatched a Tu-214r – her most advanced ISR (Intelligence Surveillance Reconnaissance) aircraft. You can think of the Tu-214R as an “AWACS for the ground”, the kind of aircraft you use to monitor a major ground battle (the regular Russian A-50Ms are already monitoring the Syrian airspace). In southern Russia, the Aerospace forces have organized large-scale exercises involving a large number of aircraft which would be used in a war against Turkey: SU-34s. The Airborne Forces are ready. The naval task forces off the Syrian coast is being augmented. The delivery of weapons has accelerated. The bottom line is simple and obvious: the Russians are not making any threats – they are preparing for war. In fact, by now they are ready.

This leaves an important question to be asked: what would the Russians do if their still relatively small force in Syria is attacked and over-run by the Turks? Would the Russian use nuclear weapons?

At least one reporter, Robert Parry, as written the following: “A source close to Russian President Vladimir Putin told me that the Russians have warned Turkish President Recep Tayyip Erdogan that Moscow is prepared to use tactical nuclear weapons if necessary to save their troops in the face of a Turkish-Saudi onslaught”. Is that really possible? Would the Russians really use nuclear weapons of things get ugly in Syria?

The Russian Military Doctrine is very clear on the use of nuclear weapons by Russia. This is the relevant paragraph:

There is no ambiguity here. Unless Russia is threatened as a state she will not use nuclear weapons. Some will, no doubt, say that the official military doctrine is one thing, but the reality in Syria is another one and if the Turks overrun Khmeimim Russia will have no other option than to use nukes. There is a precedent for that kind of logic: when the US deployed the 82nd Airborne in Saudi Arabia as part of Desert Shield the Pentagon fully understood that if the much larger Iraqi army invaded Saudi Arabia the 82nd would be destroyed. It was hoped that the USAF and USN could provide enough air sorties to stop the Iraqi advance, but if not it was understood that tactical nuclear weapons would be used. The situation in Syria is different.

For one thing, the Russian task force in Syria is not an infantry tripwire force like the 82nd in Iraq. The terrain and the opposing forces are also very different. Second, the Russian contingent in Syria can count on the firepower and support of the Russian Navy in the Caspian and Mediterranean and the Russian Aerospace Forces from Russia proper. Last but not least, the Russians can count in the support of the Syrian military, Iranian forces, Hezbollah and, probably, the Syrian Kurds who are now openly joining the 4+1 alliance (Russia, Iran, Iraq, Syria and Hezbollah) turning it into a 4+2 alliance I suppose.

There is one important feature of this 4+2 alliance which ought to really give the Turks a strong incentive to be very careful before taking any action: every member of this 4+2 alliance has an extensive military experience, a much better one than the Turkish military. The modern Turkish military is much more similar to the Israeli military in 2006 – it has a great deal of experience terrorizing civilians and it is not a force trained to fight “real” wars. There is a very real risk for the Turks that if they really invade Syria they might end up facing the same nightmare as the Israelis did when they invaded Lebanon in 2006.

In the meantime, the Russian backed Syrian forces are still advancing. Since the beginning of their counter-offensive the Syrians have succeeded in recapturing all of the strategic locations in western Syria in slow and incremental steps and they are now threatening Raqqa. See for yourself:

The bottom line is this: the size and capabilities of the Russian task force in Syria has been expanding and the level of collaborations between the elements of the 4+2 alliance has been increasing. Add to this the capability to deploy a regimental-size (and fully mechanized) Airborne force in Latakia if needed, and you will begin to see that the Turks would be taking a major risk if they attacked Russian forces even if Russia does not threaten the use of tactical nukes. In fact, I don’t see any scenario short of a massive US/NATO attack under which Russia would use her tactical nuclear weapons.

Frankly, this situation is far from resolved. It is no coincidence that just when a ceasefire was supposed to come into effect two terrorist attacks in Turkey are oh-so-conveniently blamed on the Kurds. It sure looks like somebody is trying hard to set Turkey on a collision course with Russia, doesn’t it?

Making predictions about what the Turks and their Saudi friends will do makes no sense. We are clearly dealing with two regimes which are gradually “losing it”: they are lashing out at everybody (including their US patrons), they are terrified of their own minorities (Kurds and Shia) and their propensity for violence and terror is only matched by their inability in conventional warfare. Does that remind you of somebody else?

Of course! The Ukronazis fit this picture perfectly. Well, guess what, they are dreaming of forming an anti-Russian alliance with the Turks now. Amazing no? Just imagine what a Ukrainian-Turkish-Saudi alliance would look like: a real life “Islamo-Fascist” gang of thugs combining hateful fanaticism, corruption, violence, strident nationalism and military incompetence. A toxic combination for sure, but not a viable one.

There will be no new war. We are crawling out of the Middle Ages and a Golden Age of Peace will ensue. The question is, will Turkey and Russia ever be friends?

Good article. The Saudis, who are nuclear armed, are losing to a bunch of illiterates in Yemen. But they think they can hang with the Russians?

The only way the Saudis could have any chance of beating the Russians is if they use nukes, and even then, it would be a temporary advantage, as they have no anti-cruise missile capabilities and would lose the war.

The problem is, I think the Saudis are crazy enough to do it. So are the Turkeys, for that matter.

The Russians have parked a Typhoon class submarine off the coast of the Eastern Med with 20 big SLBMs. Could not figure out the reason at the time. It is obvious why now as Russian intel probably knew about the Saudi intent. If the nutters in Saudi use one of their nukes against Russians then Saudi will more than likely cease to exist.

Do you mean a Kilo sub? No way the Russians will park a SSBN in a pond that is the Med. Sea.

Maybe the case. But the mention of the typoon has been in a number of reports and the Russians have not denied this.

Excellent analysis, however Edgar Cayce’s prediction as a clairvoyant , makes us ponder on the outcome of this adventure..He spoke of strife arising near the Davis Straits, and in Libya, and in Egypt, in Ankara, and in Syria; through the straits around those areas above Australia, in the Indian Ocean and the Persian Gulf. Add to that St. Malachys vision of Pope Francis being the last Pope, would complete the prophecy to start WW3.