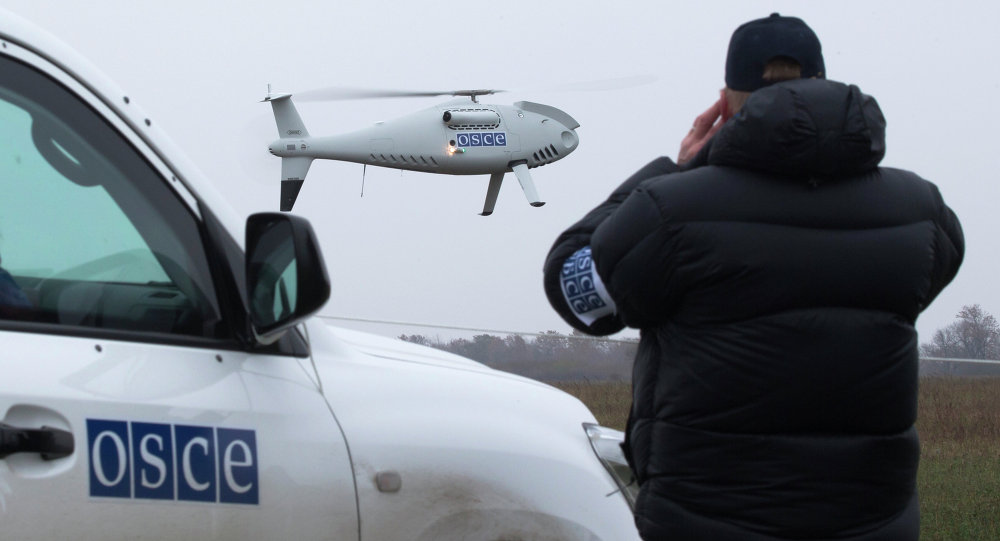 Unlike the government in Kiev, Russia is currently making significant efforts to pacify the situation in the Donbass. Moscow now agrees with the arming of OSCE observers – suggesting that the Russians are planning no new activities, militarily.

For the first time the Russian government has agreed that observers of the Organization for Security and Co-operation in Europe (OSCE) might be armed during their operations in Eastern Ukraine. In the future some OSCE observers could be armed, as “with pistols to their defense,” Russian Foreign Minister Sergei Lavrov said at the state broadcaster Rossiya on Saturday.

So far, the shaky cease-fire between pro-Russian separatists in Eastern Ukraine and Ukrainian government troops is monitored by unarmed OSCE observers, AFP reports. OSCE head Lamberto Zannier had agreed to send armed personnel to Ukraine, provided that all parties are in agreement. However, Moscow had always disapproved armed peacekeeping missions thus far.

Lavrov also suggested to reinforce the OSCE monitoring teams at heavy weapons storage facilities. This would allow a twenty-four-seven monitoring.

The armed conflict in eastern Ukraine started in April 2014. Meanwhile, the official number of deaths rose to 9400. The Ukraine accuses Russia to fuel the conflict via arms sales and by strengthening the number of military personnel of the separatists from the regions Donetsk and Lugansk. In May, 26 Ukrainian soldiers were killed in the armed conflict.

Today OSCE (NATO) will be armed with pistols, tomorrow rifles, then machine guns, APCs, tanks, etc. Now that the camel’s nose is in the tent his rump will soon follow. The people of Donbas need to understand that they are most likely doomed. Perhaps Putin will allow them sanctuary in Russia, but I doubt even that. Time will tell.

There is no way back for Putin he crossed the red line. Russia is doomed if they dont remove him from office.

The people of Donbass like the people of Syria Libya Iraq, etc etc etc have all been sacrificed on the alter of the American Empire. Pretty soon the US economy will collapse, and the world will no longer have to live under American tyranny.

Putin and the whole Russian Government will be thanked by the whole world for its part in destroying the evil empire.

Crimea should leave Russia and declare independence. All the other Oblasts should one by one leave Russia and form Novorossiya. One nation merging all ethnic Russians to one state. This nation can then actually protect the Russian people. Because Putin is only protecting his own interests.

Crimea should do, what the Crimean people want it to do. They voted to join Russia, and who can blame them, look at what has happened to Ukraine under American rule.

Totally agree with you there, Obama has destroyed Ukraine and it will be split up. But the issue of Putin agreeing to armed OSCE inspectors is him allowing ethnic Russians to be killed. There is no way back from that position.

No great loss to humanity. That’s for certain

I thought he was protecting you trolls also?

Yes. Such a hardship for the people of Donbas. They may actually have law and order restored after putin’s terrorists are cleaned up

It turns out Putin is despicable as the rest. I agree now Putin must go, let the Russian hardliners have power. The only chance for the working class is war. Putin has sold everyone out, hopefully someone will shoot him. If this is my opinion then the West have won.

Totally serious, if this is now my attitude then the Russian people will realise too that they are lost with him as leader. Time for the hardliners to take power, if it has to be a coup then so be it.

We can’t know everything he has to confront every day. I think he is in a very difficult situation, although there is no way of knowing the details. Russians are not an easy bunch, I suppose, but at least they’re patriotic. In my opinion internal corruption is the worst enemy of any country. It eats away at it. If there was more time, it could have been fought against by education (religious and otherwise) and by strict measures like the Chinese use. I can’t imagine Russia without VVP, although I see that some people are thinking of alternatives. https://www.rt.com/politics/346097-upper-house-chair-claims-russians/

The only hope for Russia is that the hardliners come to power, Putin is a dissaster for Russia, in a simple action of allowing the OSCE he has agreed to the murder of millions of Russians.

His actions of not defending the Donbass is obvious now, he has left them to die.

Terms like croosing the red line,he must go and similar shit tells everything about doomsternz.U r on wrong site man and the wrong side too

Is this the new direction you Putin trolls are heading in?

Seems like there are a number of trolls working overtime,Putin unlike the West will do what is best for Russia and the Russian people, not the greedy bankers and as a side note Yeltsin looted Russia on behalf of his so called Western partners running the proceeds thru London and New York to the tune of some $2 trillion dollars so I read.!!!

That is defacto what all the so called hooray patriots said when he didn’t intervene in the Donbass, and look now, Donbass is de-facto a Sovereign territory. Putin is a tactician and he is all but stupid, but I know there are many out there who would gladly send in one or two Russian divisions to finish of the Junta, that is exactly what the empire of chaos wants, namely Washington.

Putin has made the brilliant move not to interfere directly in the Ukraine, but at the same time he allowed massive support in arms, training and “volunteers” and let the Kiev Nazis bleed Washington’s dollars out of thier pockets, to support a failed state, they want a way out of it, but Putin didn’t take the bait and instead turned the tables by by having both stuck between a rock and a hard place.

So no, that would be the most stupid thing to do to send in the cavalry, because both Washington and Kiev knows that Putin has achieved his goal, while Washington hasn’t, Even their EU vassals understands that the Donbass and Crimea are gone for good, and that there is fairly good chance that the rest of the Eastern Ukraine will soon follow them. as the people can clearly see that there is no future with the Nazi junta and being another U.S vassal state in Europe.

Ask yourself one question…..what is the need to arm inspectors? The answer is obvious to kill people. Alexander Hug of the OSCE has already clearly stated they are there to support the Kiev regime, nothing else. Arming the OSCE is a hostile act of war against the people of the Donbass all supported by Putin, he must go, the sooner the better.

listen you shithead! create your own empire and you can do what you waont. but until that time shut up and do not tell from the couch, who should go or not. you can go fight for novorossija. and the problem is solved. :)))