FBI Director James Comey and NSA head Adm. Michael Rogers hold their much anticipated testimony over Russian interference in the US elections, breaking their public silence for the first time before the House Intelligence Committee.

As The Hill adds, spectators and media lined up down the hall in preparation for the hotly-anticipated open hearing, where lawmakers are expected to press Comey to respond to President Trump’s claim that former President Barack Obama “wiretapped” him during the campaign. It remains unclear how much the two officials will be able to discuss in a public setting, and many expect the hearing to quickly produce fireworks from a committee fiercely divided over what to investigate first.

Frustrated Democrats will push officials for evidence of collusion between the Trump campaign and Moscow — while Republicans will seek to get to the source of a series of media leaks of sensitive information believed to have come from the intelligence community.

Watch the hearing live below.

Today at 10am, the directors of the Federal Bureau of Investigation and National Security Agency will break their public silence and give keenly await testimony about their investigations into possible links between Russia and President Donald Trump’s campaign at a rare open congressional intelligence committee hearing. They will also be grilled on Trump’s explosive allegation that he was wiretapped by his predecessor Barack Obama. 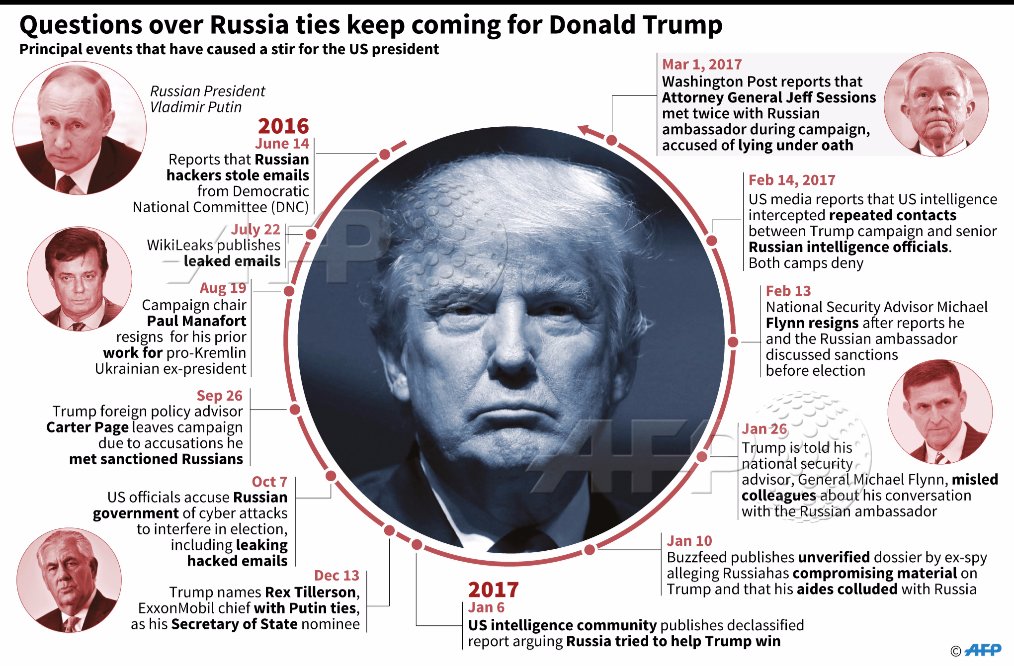 Federal Bureau of Investigation Director James Comey and Mike Rogers of the National Security Agency will speak publicly for the first time about two issues that have riveted the American public for weeks and further divided the country’s two ever-at-odds political parties. The stakes for Trump could hardly be higher according to AFP. Representatives Devin Nunes, chairman of the House of Representatives Permanent Select Committee on Intelligence, and Adam Schiff, the panel’s top Democrat, have called Comey and Rogers to testify as part of their committee’s probe into allegations that Russia meddled in U.S. elections.  Other congressional committees also are investigating the matter, mostly behind closed doors. But amid a furor over whether Moscow tried to influence the 2016 presidential race on Trump’s behalf, lawmakers said they would make public as much of their probes as possible.

Trump and his entourage’s possible ties with the Russia of President Vladimir Putin have been the subject of much speculation since before he was elected on November 8.

US intelligence agencies in January took the extraordinary step of stating publicly that they had concluded that hackers working for Russia broke into the email accounts of senior Democrats and released embarrassing ones with the aim of helping Trump defeat Hillary Clinton. Even since then, the question of whether Trump and company were or are somehow in cahoots with Russia has dominated the national conversation. A congressional panel so far has found no evidence that Trump’s campaign colluded with Russia, its chairman said Sunday.

Based on “everything I have up to this morning — no evidence of collusion,” by Trump’s team and Moscow, Representative Devin Nunes, chairman of the House Intelligence Committee, told Fox News.

Meanwhile, Moscow has denied involvement in the hacks, and Trump has denounced the tumult over alleged Russia connections as a “total witch hunt.”

Monday’s hearing was also expected to address a second explosive issue: Trump’s accusations that the Obama administration wiretapped his phone at Trump Tower in New York during the campaign. Trump on March 4 tweeted that Obama had “tapped” his phone — a charge that has consumed political debate in the US capital.

Several congressional panels have launched investigations into Russia’s alleged interference, including the House and Senate intelligence committees, which have jurisdiction over the nation’s 17 intelligence agencies, and the House and Senate judiciary committees. The FBI is also probing Russian interference in the election. The question remains whether the agency has opened a criminal investigation into possible ties between Trump campaign aides and Russian officials.

Monday’s hearing promises to be a very public showdown between the FBI and lawmakers, with the national security world certain to watch whether Comey drops a political bombshell. Members of Congress have expressed frustration over what they call the lack of cooperation from the FBI about Russia and Trump’s wiretap claim, which Obama and an array of other officials have flatly denied. The issue of wiretapping first surfaced last month, when Trump’s national security adviser Michael Flynn was forced to resign after it was revealed he had misled top officials over his contacts with the Russian ambassador to Washington to discuss sanctions Obama had just announced against Russia over the election hacking.

Around the same time, The New York Times reported that US intelligence had intercepted calls showing that members of Trump’s campaign had repeated contacts with top Russian intelligence officials in the year preceding the election.  Nunes has said that the intelligence committee probe focuses in part on who revealed that Flynn had unreported private contacts with the Russians over the sanctions issue.

Adding to the intrigue, Trump’s attorney general Jeff Sessions recused himself from any Russia-related inquiries after it was learned that he had met twice with the Russian ambassador in the months before Trump took office, and had failed to disclose this during his confirmation hearing when asked a question about such contacts and speaking under oath.

Domestically, the controversy over the wiretapping claim has pulled attention away from Trump’s effort to push through other key items on his agenda, including the planned repeal of Obama’s healthcare law, tax reform and his controversial travel ban. Critics say it has also debased the already coarse tone of political debate in Washington and eroded the president’s credibility at home and abroad.

Some of the fallout has been international in scope: The White House was forced to retract a charge repeated last week by its spokesman Sean Spicer suggesting that Britain’s intelligence services aided the Obama administration in the alleged wiretap. That claim has strained relations with America’s closest ally. Still, as recently as Friday, Trump repeated the claim in an aside during a White House press conference with Angela Merkel. “As far as wiretapping, I guess, by this past administration, at least we have something in common, perhaps,” Trump told the German chancellor, referring to a WikiLeaks report in 2015 that the US had monitored calls involving Merkel and her top aides for years.

For those not near a TV, the hearing will be live webcast by C-Span.