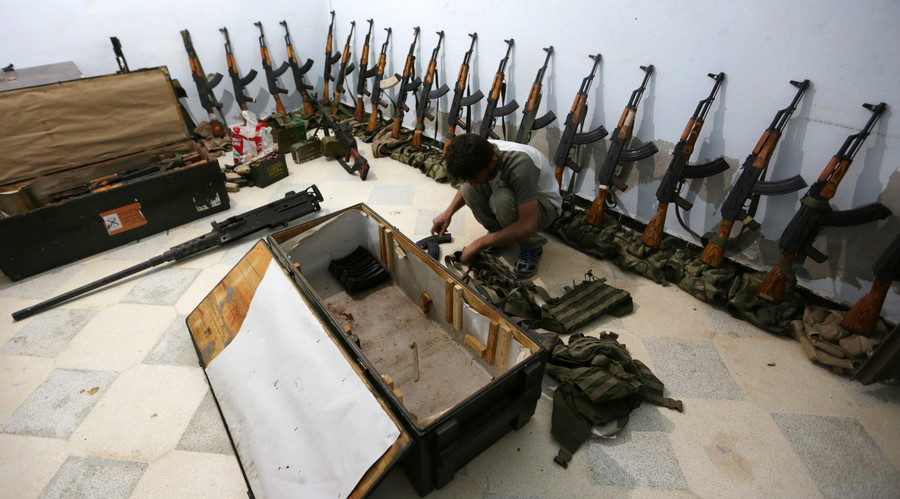 There is a possibility that “Gulf states” [after the US authorization, for sure] might arm Syrian rebels with shoulder-fired anti-aircraft missiles, US officials told Reuters, speaking on condition of anonymity.

According to the report, the US has kept high numbers of man-portable air defense systems (MANPADS) out of Syria by uniting Western and Arab allies behind sending training and infantry weapons to moderate opposition groups. However, now, when the ceasefire is collapsed, the US Middle Eastern allies may sooner or later silently agree to wealthy individuals supplying MANPADS to militants in Syria.

“The Saudis have always thought that the way to get the Russians to back off is what worked in Afghanistan 30 years ago – negating their air power by giving MANPADS to the Mujahideen,” Reuters cited an unnamed US official. “So far, we’ve been able to convince them that the risks of that are much higher today because we’re not dealing with a Soviet Union in retreat, but a Russian leader [Putin] who’s bent on rebuilding Russian power and less likely to flinch.”

Another anonymous administration official told Reuters that “The opposition has a right to defend itself and they will not be left defenseless in the face of this indiscriminate bombardment.”

The official noted that some US “allies and partners” have been involved in the US-Russia talks on Syria:

“We don’t believe they will take lightly to the kind of outrages we’ve seen in the last 72 hours.” However, the official refused to comment on “the specific capability that might be brought into the fight.”

great, and Russians should give many manpads to Hezbollah, so it can target Israeli jets and also to Houthis in Yemen, so they can down Saudi jets. Besides, Americans do not care that these US manpads will soon likely also get to the hands of Taliban and other anti-US groups in the Middle East and US jets will start falling down as well? Many US-supplied weapons in the Middle East are actually sold on the black market, so they can easily get even to USA enemies. What a great idea.

The Houthis in Yemen also have a right to defend themselves against the Saudis. Give them MANPADs, an S300 and even a Pantsir s2.

I am an American and my country is out of their freakin’ mind. They forget that proxy wars are a two way street, don’t these imbeciles recall Cold War I with Vietnam? For some reason these guys only remember Afghanistan. My leaders are so stupid it is scary. They are scary stupid.

Chris, they think they can do anything in plain sight now. Russia will not tolerate it. If they really go that far, Syria could almost disappear from the radar screen, when compared to what could come next. Russia would be at liberty to pick their target, time frame and then go for it. I hope they do not continue to daydream in DC. A good day to you.

If the US authorizes supplies of manpads, then russians will have no choice but to carpet bomb ennemy lines from a high altitude, in this densely populated area. By arming those so called “moderate rebels” (in fact wahabo – takfirist of Saudi allegiance who are not even – for many of them – syrian), the US has the full responsability of the consequences of their irresponsible act

In the eyes of the psychopaths who are running my beloved country, that is known as a win / win. They can then blame Russia for war crimes. There are days where I wish I took the blue pill instead of the red pill.

let’s just hope that the Saudi economy will collapse.

It’s against international.law to arms terrorists period, paragraph. It’s also a violation of domestic law. A few manpads a lot of manpads. It’s still a crime. It won’t stop the Syian Coalition. They’ll fly with protection like they did after Turkey shot down their plane. Using the manpad will be a suicide mission.

within 30days, we might be watching a f-16 will fall from the sky in ‘iraq’. IS would love to shot down some US planes in iraq where they are suddenly being harrassed. they would like to have the old good days before russian intervention where US&Co were doing a great job.

by the way here is a video with the interview with Nusra commander. but it has german sub.

The more I think about it, the Russians could openly give the Houthis air defense weapons.

Southfront published an article where they made a compelling argument that the Houthi council is the the legitimate governing body of Yemen according to their constitution. Russia, Iran, and Iraq recognize the Houthi govt and the rest, is how you say, history.

So if the right Gulf States, really, really, want to go their ….

Russia has ways to jam much of what type of manpads that could be given to the terrorists. The Syrian air force are the main troops that this would endanger. Any government caught supplying them should be hit with a decapitation strike via kalibrs. Russia should also start mentioning the need to send humanitarian supplies to the Yemeni government to help out with the crisis there. That would decrease the effect of nato and gcc slandering of them on humanitarian grounds. It would also start giving them a way to covertly supply the Yemeni army as well like the gcc and nato have been supplying the so called Syrian rebels.

If Yemen is supplied with enough weapons then Saudi Arabia/Qatar will fall. This may be the best thing for all concerned.

Russia and the Syrian coalition knows who is supplying weapons and if this materializes it would deserve a retaliatory direct strike on Riyadh and fill in the blanks. Man pads to jihadist to return to the Russia in country with does not fit into “kill them all there, better than here” scenario. Putin does not have to say it but I can read his thoughts “make my day!

John McCain and his ilk have long advocated a reckless policy of supplying terrorists with MANPAD anti-aircraft missiles that can down Syrian jets–or ground the world’s civil aviation fleet. Imagine MANPADS off the runways of Heathrow, LaGuardia and Dulles Airport. Is there any doubt the terrorists will use them against them against passenger jets once we give them away? Open Pandora’s Box and you can’t get the monsters back in. Washington is swarming with madmen, willing to risk our lives for favors from Saudi dictators.

This is all revenge because they cannot get rid of Assad and overthrow HIS Government, and the UN is their partner in all this…