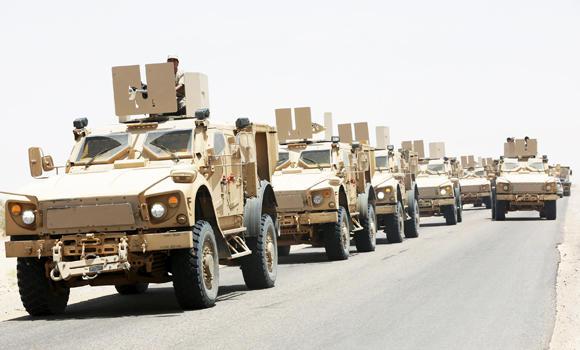 This article originally appeared at Muslimpolitic, translated by Olga Seletskaia exclusively for SouthFront

Four units of 150-200 soldiers each, along with tanks and vehicles arrived in Yemeni territory from Egypt in the evening of September 8. As representatives of the Egyptian forces say, “they have sent these troops as part of Egypt’s active participation in this alliance .”

The member countries of the coalition (first of all, Saudi Arabia, the United Arab Emirates, and Bahrain) have been actively transferring their military units to Yemen over past few months. This participation resulted in taking control over several southern provinces of the country, as well as Aden. After the missile strike on a training camp in the province of Marib, in which the coalition suffered heavy losses, the process of transferring military contingents accelerated even more (in particular, the soldiers from Qatar arrived). The reason is that Er- Riyadh and his allies fear the new missile attacks will cause more military personnel losses, which will inevitably lead to a reaction in the soldiers’ homeland.

In addition to Qatar and Egypt, Kuwait is going to join the ground operations. The arrival of combat troops from Jordan and Sudan is also expected. In particular, Khartoum has prepared two battalions who will take part in the battles for Sana.

In addition to the arrival of new military forces, the coalition command started a large-scale relocation. Dozens of armored and other vehicles moved from an air base As- Safir to the west, towards Marib, the administrative center of the province. That’s where fighting against the rebels have been taking place for a long time.