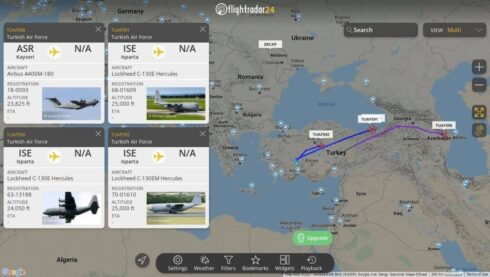 Several cargo aircraft of the Turkish Air Force were spotted flying to Azerbaijan. They are likely transporting heavy equipment to take part in the joint exercises that kick on October 5th.

One Airbus A400M-180, one Lockheed C-130EM Hercules and two Lockheed C-130E Hercules aircraft took off from Turkish Isparta and Kayseri airports. The aircraft landed in Sumgayut, north of Baku, and latter left Azerbaijan. 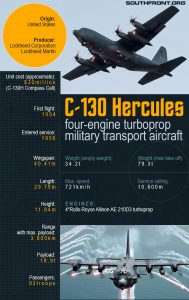 Baku and Ankara are preparing for joint military exercises that will take place from October 5th to October 8th in the Azerbaijani Nakhchivan Autonomous Republic near the border with Iran.

“Unshakable Brotherhood”exercises will be conducted in order to “develop friendship, cooperation and coordination between the Turkish and Azerbaijani Land Forces,”according to the Turkish Defense Ministry. 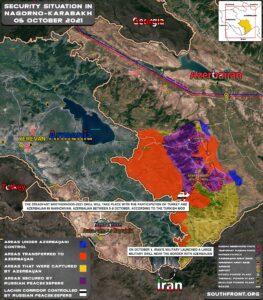 The Ministry also claimed that the rehearsals of drills were carried out successfully, sharing some footage. 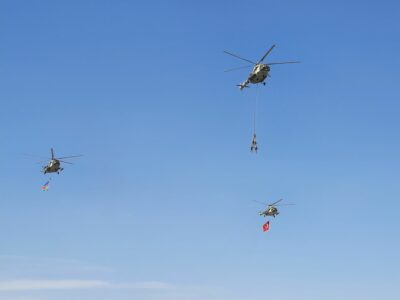 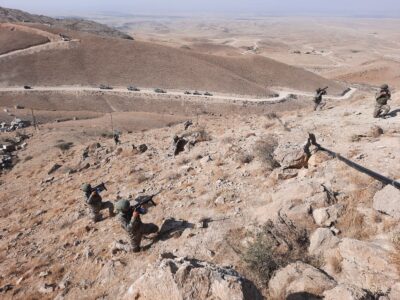 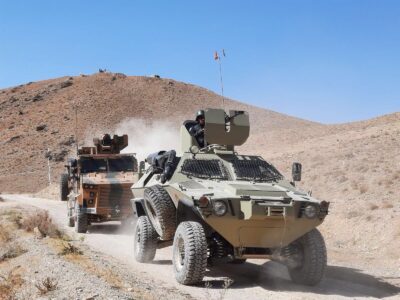 The meeting took part amid the joint “Eternity-2021” military exercises with Georgian, Azerbaijani and Turkish servicemen that were launched in Georgia on October 4th.

A few weeks ago, on September 15th, other Turkish-Azerbaijani joint exercises TURAZ Hawk 2021 were completed in Konya.

This is not Sunni-Shia there. Georgia is Christian, Turkey is Sunni, Iran is Shia, Azerbaijan is secular. But all of them will unite in the end of the age!

Georgia may be Christian in fake front religion but is Turk in heart and morality and Stalinist in murderous nature….soon to be a colony of Turkey

Azerbaijan is 90% Shias, and they hate their Sunni government. Azerbaijan will have to fights its own citizens before posing a threat to Iran

Well?……will you have a mixed breed mongol baby too in that age no? What else is in the third world prophecy?

With that weak Turkish lira, this whole “exercise” surely will hurt a little. In the end someone has to pay the bill. But let them have fun :-) … as long as no one gets seriously hurt!

Turkey is not a big player in this scenario. It’s military is still mostly dependent on foreign hardware. So far they are only at the beginning of the development of their own MIC. It will take them about 20 years to have the same capabilities of a genuine military force to be really taken seriously. Playing chicken while their economy is getting crushed by an alley does not sound like they have much to say on behalf of other country’s affairs. Siding with Russia and the US at the same time does not even sound like they have real balls too bet on themselves any time soon.

Hmmm Erdogan is controlled by Zios and Big Satan…. All Muslims must be united and remov Zio and Big Satan from the ME… 4 milion Zios are causing so much problems and wars. Wars between Muslims…. Hmmmm… We Muslims are stupid and brainwashed, the most off us. Zios can buy us very chip to do their dirty wars… Erdogan is protecting and arming Jihadists, ISIL is Syria openly…. “West” is ingnoring och supporting Turkey… It seems that Turkey is worst then Saudiarabia…. Erdogao is talking a lot about Palestine, but there is no action, only empty words… If Erdogan is true Muslim, please send all Jihadist to Israel border to fight real enemy, not Muslim brothers and systers… Hmmmm S400 in Turkey… To fight Iran not Zios or Greeks…. Thre is no USA sanctions about Turkish S400…. Why Erdogan is protecting Zios in Azerbaijan? Sonn he will protect them in Iraq, Kurdistan…

4milion Zios want to controll the whole ME.. Is it not enough fanny to peole with at least 5% still working braicells

No fight, this is fake news.

Thank you for your diagnosis. Yes, I am brainwashed to see the real enemy created 1947 by England

I now understand why Putin supplied those s400 to Turkey!

He thinks he can appease Erdogan?

In case of war Iran&Armenia vs Azerbajan&Turkey…what will be the reaction of Russian ?….if Putin wants to preserve the interest of Russian Oligarchy or to preserve the Russian military interests…because one thing is sure…Iran is not Karabaj farmers army and will take Baku in few days once his Air defense wipe off all Azeri drones and his ballistic/ cruise missile destroyed the Azeri army.

Why do you think that Iran will ally with Armenia? They don’t even care.

Because the Armenians can not be bought by the jew…. a stable and trustworthy neighbor… Of course Pashynian is really a Soros plant and a Turk in his heart… but he can be taken out

Why do you think Greece ally’s with France against the asiatic regional mongols? When the Greeks know that France just considers them as EU camel jockey no?

Putin ,the chabbad whore ,will take the side that offers him and his prostitutes the largest payoff percentage…. he is true scum masquerading as great champion of Orthodoxy

Turks are still working for west zionist scum . this alliances of Azerbaijan/Gerogia is like anti Russia drill and anti iran drill. Edogon is israli puppet. Turks are hypocirte and liars like zionist. becarfull russia/Iran and china. this terrrsiot alliance togther with US/Zionist are planning something.

Since they have been losing technological military supremacy to Russia mostly and also China for over a decade now, they feel cornered and trapped, like the rats they are. Turkey is acting as the external Trojan Horse of NATO, rather ironic, isn’t it? In essence, NATO uses Turkey to try to influence and infiltrate Muslim nations the world over and in the last few years, Russia. The Chinese, on the other hand, know the Turks are two-faced swine and don’t even bother with them. They won’t even sell the Turk turds a sling-shot.

Did you just smoke a joint and suddenly got interested in Geo-politics?…..Why don’t you add Argentina and Brazil in the list too no?

Man, some here are like in high school. Totally pathetic knowledge.

The turk clowns are simply playing tit for tat games with Iran. The reality is they are about to get kicked out of Syria soon and this is erdogans pathetic attempt to show strength and provocation.

Hmmm Erogan is traitor, because of his cooperation with Natanjahu and their plans….Israel has free route to fliy in Norh Syrian, from Idlib to Iraq, Kurdistan. Thats why Erdogan created “save” zone 30km from Turkish border. Well planned Here is the plan about USA invasion from Bush and Obama(both Iran och Azerbaijan and Israeli 2 airfields in Azerbaijan)