On November 4th, it appears that Ethiopia is on the brink of a war, as Ethiopia’s Nobel Peace Prize-winning prime minister Abiy Ahmed ordered the military to confront the country’s Tigray regional government after he accused it of carrying out a deadly attack on a military base, declaring “the last red line has been crossed” after months of alleged incitement.

The statement by Prime Minister Abiy Ahmed’s office, and the reported overnight attack by the well-armed Tigray People’s Liberation Front, immediately raised concerns that one of Africa’s most populous and powerful countries could plunge back into war.

That would send a shock wave through one of the world’s most turbulent regions, the Horn of Africa. Ethiopia’s neighbors include Somalia and Sudan, and the prospect of spreading instability sent a chill down the spines of observers.

Addressing the nation on TV, Abiy announced “several martyrs” in the attack in Mekele, the northern Tigray region’s capital, and Dansha town.

The prime minister said “the end is near” for the regional force, which is based in Ethiopia’s most sensitive region, neighboring Eritrea. The two countries made peace in 2018 after a long border war.

The entire statement by the Prime Minister, signaling the potential start of war can be read in its entirety below: 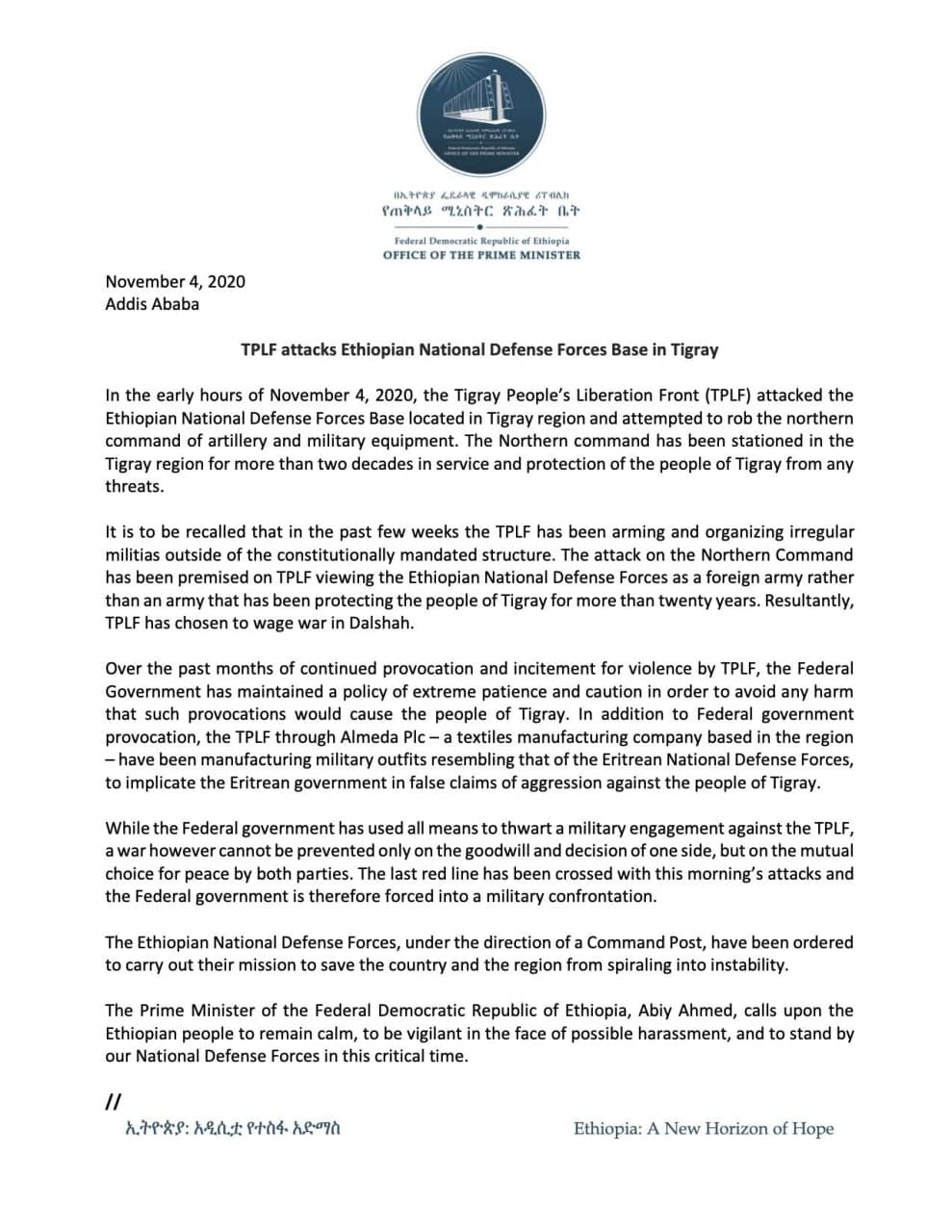 Tigray People’s Liberation Front (TPLF) has, for a while, been dominant in Ethiopia’s leadership, until Abiy took office in 2018 and announced sweeping political reforms that won him the Nobel in 2019.

Ethiopia on November 4th declared a six-month state of emergency in the Tigray region, saying that “illegal and violent activities within the National Regional State of Tigray are endangering the constitution and constitutional order, public peace and security, specially threatening the country’s sovereignty.”

There was no immediate word from the TPLF, and all internet and phone lines were cut in the Tigray region following the announcement, provoking distress among people who could not reach loved ones.

Tigray TV reported that airspace has been closed over the region, and it asserted that the northern command of Ethiopia’s military had defected to the Tigray government.

“Ethiopia’s Tigray region has banned flights from its airspace, after the Prime Minister Abiy Ahmed ordered a military response against the region, it said on a statement broadcast on television.

The prime minister’s office told The Associated Press the defection report was “not true.”

A report by the United States Institute of Peace said the fragmentation of Ethiopia “would be the largest state collapse in modern history, likely leading to mass interethnic and interreligious conflict … and a humanitarian and security crisis at the crossroads of Africa and the Middle East on a scale that would overshadow the existing conflicts in South Sudan, Sudan, Somalia, and Yemen.”

And Ethiopia’s problems aren’t simply in one direction, the dam – the Blue Nile project, which Egypt and others strongly oppose is also a big issue.

While all media attention is still riveted on the “delayed action dam” on the Blue Nile, which Donald Trump irresponsibly “allowed” to raze to the ground, in Ethiopia, the confrontation between the federal center and the leadership of the rebellious Tigray region is escalating. Without agreement with Addis Ababa on September 9th regional elections were held, which brought victory to the ruling TPLF, which received 98.2% of the vote.

On October 7th, the Addis Ababa government decided not to cooperate with what it believes is unconstitutional, the elected State Council and the state government, and allegedly withheld 285 million birr($ 7.6 million) for social programs in the region.

In turn, Mekele blocked the appointment of a new military leadership in Tigray, and as November 4 approaches, when the state is to receive appropriations from the state budget, federal lawmakers are demanding that Abiy Ahmed’s government block transfers to the rebellious region, and the less radical Ministry of Finance threatens to transfer funds directly to the district and city ​​authorities, bypassing Mekele.

For 30 years, the ruling TPLF in Tigray led the country at the head of the Ethiopian Revolutionary Democratic Front coalition, until large-scale protests in 2018 brought the incumbent Prime Minister Abiy Ahmed to power, who later formed a united Prosperity Party, which the TPLF refused to join.

Many representatives of Tigray and the NFOT, accused of “state terrorism”, lost their positions in the government, the armed forces and intelligence, some ordinary tigers – businessmen, traders – were discriminated against and pogroms, in particular in the state of Amhara.

Ethiopian states, or regions, enjoy significant autonomy in security, taxation, land use, and natural resource exploitation. However, the behavior of the TPLF, once the architect of “ethnic federalism,” now accusing Abiy Ahmed of “unleashing a war” and challenging Addis Ababa’s right to control military facilities, tests the strength of the federal center’s position, and tensions are also deepened by the unresolved territorial disputes between Tigra and Amhara – representatives of the federal center irresponsibly hinted at the participation of the TPLF in the “ethnic cleansing” of Amhara, living in the Benishangul-Gumuz region, and in incitement during the summer riots in Oromia, caused by the death of the famous musician Khachalu Hundesa. 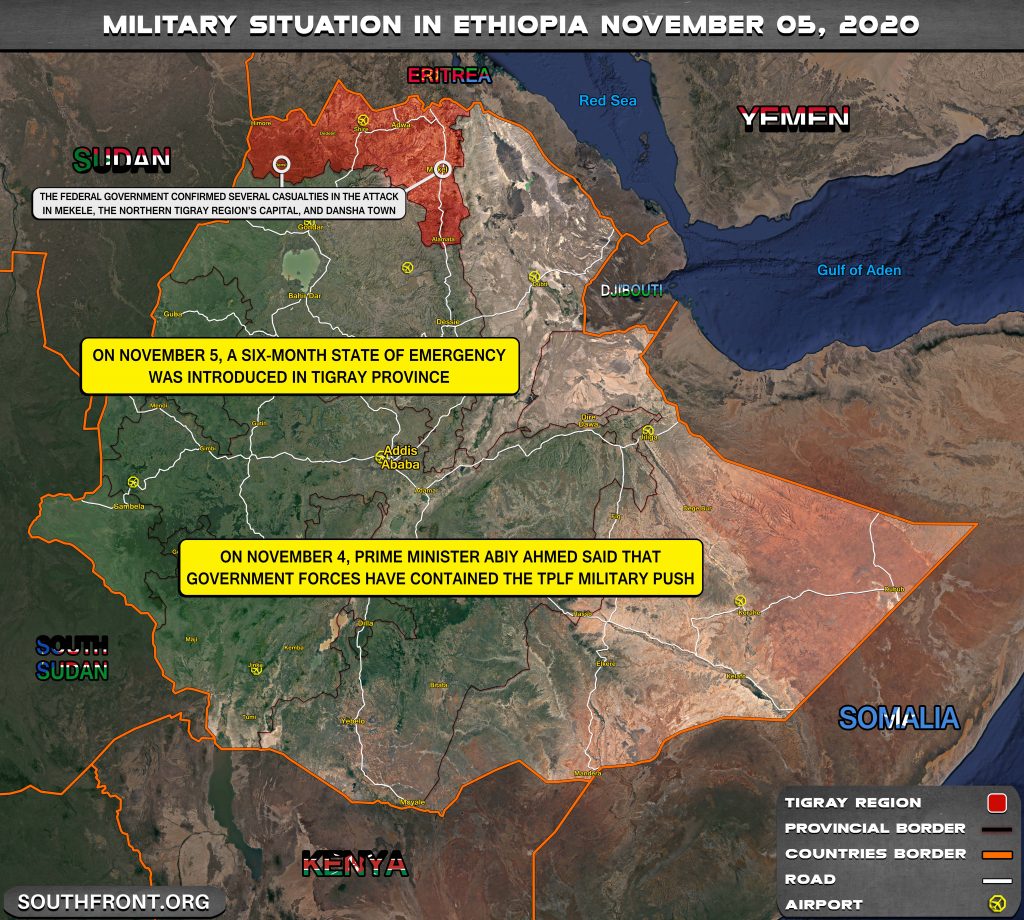 After the recent incident, when at least 32 people were killed in the west of Oromia, in the Guliso Vereda region, the authorities of this state officially blamed the separatist “Front for the Liberation of Oromo”, allegedly acting in collusion with the NPLT, and Prime Minister Abiy Ahmed announced the provocation in order to “wreak havoc and seize power.”

Tension is also caused by the partial normalization of relations with Eritrea, the rapprochement with which, according to some estimates, is intended to guarantee the government of Abiy Ahmed assistance in the event of a military solution to the conflict with Tigray, with which the Eritrean dictator Isaiah Afeworki has his own difficult history of relations.

The leadership of Tigray, one of the most stable regions of the country, hints that it is ready for a military conflict – and now it got it, and the outcome is a guess for anybody.

The TPLF has paramilitaries and a mobilization reserve of veterans of the war with Eritrea (1998-2000), and the loyalty of many Tiger soldiers and officers from the Northern District is in question.

Needless to say, how dangerous the conflict is for regional security – with the collapse of the security system on the ground, the country is experiencing the politicization of ethnicity, the growth of separatist and autonomist sentiments, in particular in Oromiya state, where in July during the suppression of disputes.

The situation is such that The Nobel Peace Prize-winning Prime Minister, for one reason or another, has decided to deploy troops against a local government that’s not under his control. Whether the accusations against the local government are true, is up to debate, at this point.

At the same time, instability within Ethiopia would also facilitate any actions that Egypt and Sudan may undertake against the Blue Nile Dam project, and its smooth operation. Both countries strongly oppose it, and despite not directly threatening to destroy it via militarized means, the option is still there, especially when internal strife is on the menu for Ethiopia from within.

Furthermore, help to resolve the potential war in Ethiopia may not come from outside, since currently, due to the abovementioned reasons, relations are strained with its closest neighbors, the most formidable of which is Egypt.

Egypt cause Ethiopia kismish,,,,,no dam nile,,,now too busy killing each other……..

It is directly linked to the Ethiopian dam on the Nile which will cut 50% of Egyptian war supply.

” But Sissi is a good guy, he defeated the Muslim brotherhood !! ”

Frankly, Sisi is our bastard.

‘Our bastard’ is not good enough, in many cases at least.

traitor zionist Sisi and UAE is doing this

Trump openly gave Sisi the green light to “blow up the dam”.

Tigray People’s Liberation Front (TPLF) is armed and trained by Israel with UAE money. Tigray is contiguous to Eritrea which hosts US, Israeli and UAE naval and military bases.

The lack of interest in Africa is quite telling about racism by the only 3 comments. Ethiopia was a US and Zionist proxy previously and used as cannon fodder for neo-imperialist wars, but after Trump gave the go ahead to Egypt and its UAE oil rich masters the go ahead to “destroy the dam”, Ethiopia’s fate was sealed. UAE has a naval base along with Israel in Eritrea and in Socotra island Yemen, the destabilization of the horn of Africa is now in full swing. Egypt and UAE along with Israel are now involved in carve up of Ethiopia and Sudan.

And was again China and Russia will say ” What happened ? We didnt see this coming. What a shock !! ” and the circus rolls on.

Frankly, black people kill each other all the time, and unless they have some strategic value, minerals or oil, no one cares. This is a frank assessment..

No one in temporal power you mean.

Those imbeciles have long seemed keen to preferentially carve up Ethiopia (a Soviet-DDR proxy in Mengistu’s time), the oldest nation in Africa after Egypt, and mainly Christian, when there are a lot of less worthwhile entities to preserve as is on that continent and elsewhere.

US pays Ethiopia millions $ to occupy part of Somalia; Ethiopia has long been plagued w ethnic divisions, 1st exacerbated by the Italians in Eritrea now by amerikans in Ethiopia

Nobel peace prize winners are always high masons, so very likely he was groomed for his war job, to turn his country into chaos. There will be more to follow, since the fucked up elections in states might be the hanger for the Zionist and their wet dream of the ages…

Greetings, Jabbar Abbo. If these are your maps and you want them to be mentioned on southfront.org, please, write us an email to info@southfront.org Best regards, SF Team

yes its my maps my e mail jabbarabbo@gmail.com

yes its my maps