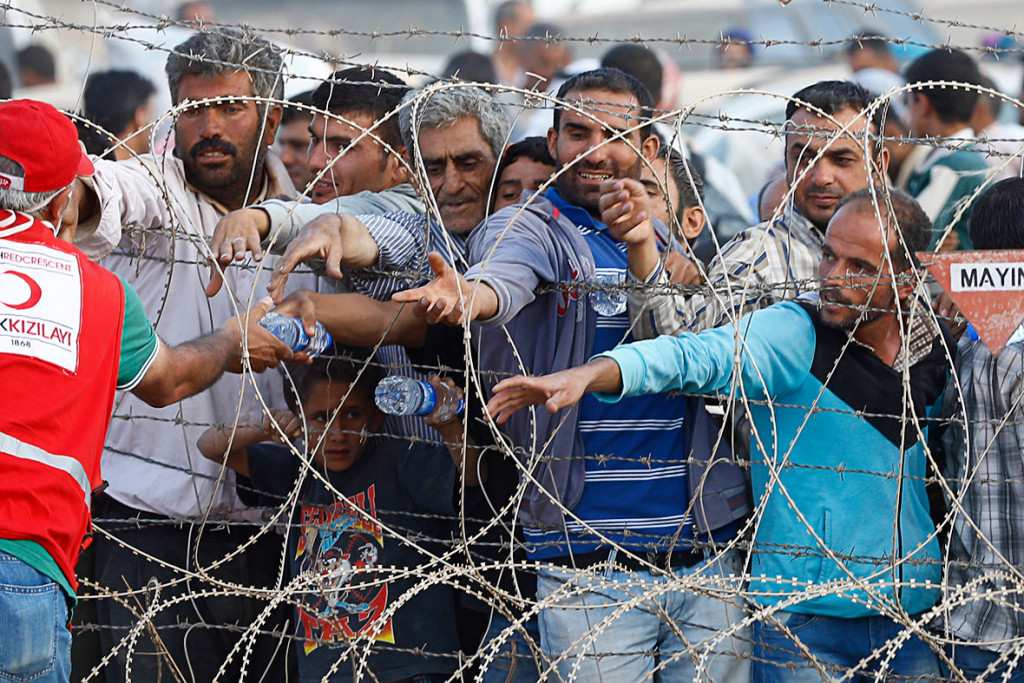 A member of the Turkish Red Crescent distributes water to Syrian Kurds as they wait behind the border fences to cross into Turkey Photo: Reuters

By making the EU-pact with Turkey, the EU wants to seal itself off against refugees and migrants. But the treaty could also lead to new refugees arriving. For the first time Kurds can set out towards Europe. They can, according to the pact, soon enter without a visa into the EU. A ticket from the Kurdish areas to Berlin costs only around 60 euros.

For the Turkish Coast Guard, it was a novelty: By their own account they stopped last month in the Aegean Sea for the first time Kurds from southeast Turkey, who want to escaped the violence there and seek refuge within the EU. In the future, Kurds with a Turkish passport can save the expensive and dangerous sea trip – as soon as the visa requirement gets dropped for Turkish citizens, as it is planned for the end of June.

From then on Kurds could travel directly to Germany, for example with the flight from the Kurdish city of Diyarbakir at 7:10 am via Istanbul, arrival at Tegel 14.15pm. The costs are currently at 200 Lira, which is converted about 62 Euro – one-way of course. This is an amount that also almost everyone can afford in Turkey.

In the refugee pact with Ankara the EU promised visa exemption for Turks by no later than the end of June, if Ankara fulfills 72 conditions. More than half of the points – involving passport specifications – have been processed, and the remainder should be completed by May. The paradoxical consequence of the agreement could be that although the EU seals itself off against refugees from Syria and Afghanistan, but instead tons of Kurds could come, mainly to Germany.

This is especially true if the conflict between the government and the banned Kurdish Workers’ Party PKK in the southeast of Turkey should further escalate, whereupon everything indicates to. “Flows of people will want to go to safer areas,” says the chairman of the pro-Kurdish opposition party HDP, Selahattin Demirtas. “Not only Kurds, but Turks also could flee to Europe.”

To date, applicants must be able to credibly assure that they want to return to Turkey, in order to get a visa for the Schengen area. Currently those who don’t have a visa cannot even get close to an aircraft. If the visa requirement gets dropped, only stays of up to 90 days will be allowed – the right to settle in the EU or to work there will not exist.

However, many Turks might be tempted to seek illegal employment and go underground after the 90-day period. Whoever has Turkish family over there is therefore in no danger of becoming homeless – and many have relatives in Europe. Opposition members might consider escaping the growing political pressure in Turkey. According to the Ministry of Justice President Recep Tayyip Erdogan is pressing over 1800 charges of libel against opposition members.

But the by far the largest group could be Kurds fleeing the civil war-like conditions in the Southeast of Turkey to Europe and especially to Germany. Anyone who manages to get to Germany can apply there for asylum – especially if he has previously not crossed any other EU country.

In Diyarbakir surprisingly many Kurds know about the planned visa waiver decision. “All will go to Germany,” says 43-year-old Yüksel. One of her brothers is fighting for the PKK, two are in prison, two were killed in combat, she said. The 51-year-old Mustafa Cukus who has lost his 16-year-old daughter Rozerin during the fighting in Diyarbakir, says: “If I had the opportunity to go to Europe, I would go. I think everyone in my position would go. ”

The increasing violence in the Kurdish regions has already expelled more than 350 000 people according to the government. So far, they have been looking for protection in their own country. The visa waiver would change that, said Turkey expert Gareth Jenkins from the Institute for Security and Development Policy (ISDP). “Potentially 400,000 to 500,000 Turkish refugees – mainly Kurds – could apply for asylum.”

Those applicants would have less of a chance of being admitted if the EU would classify Turkey as a “safe country of origin” – which would attest Erdogan that in his country human rights are respected and there is no political persecution. Because of the considerable doubt in Europe about this, there is a strong resistance against such a classification that are proposed by EU Commission chief Jean-Claude Juncker and German Interior Minister Thomas de Maizière (CDU)

Turkey expert Jenkins does not believe that the visa-free regime ever comes. “I think Schengen will rather break apart,” he says. “I’m sure that some States would withdraw from Schengen before allowing Turks a visa-free entry.” But the visa waiver is for Turkey the most important point in the pact with the EU. If Ankara feels being cheated about it, the agreement might well be abolished. Erdogan could then make his former threat come true- and open the borders to the EU for refugees.