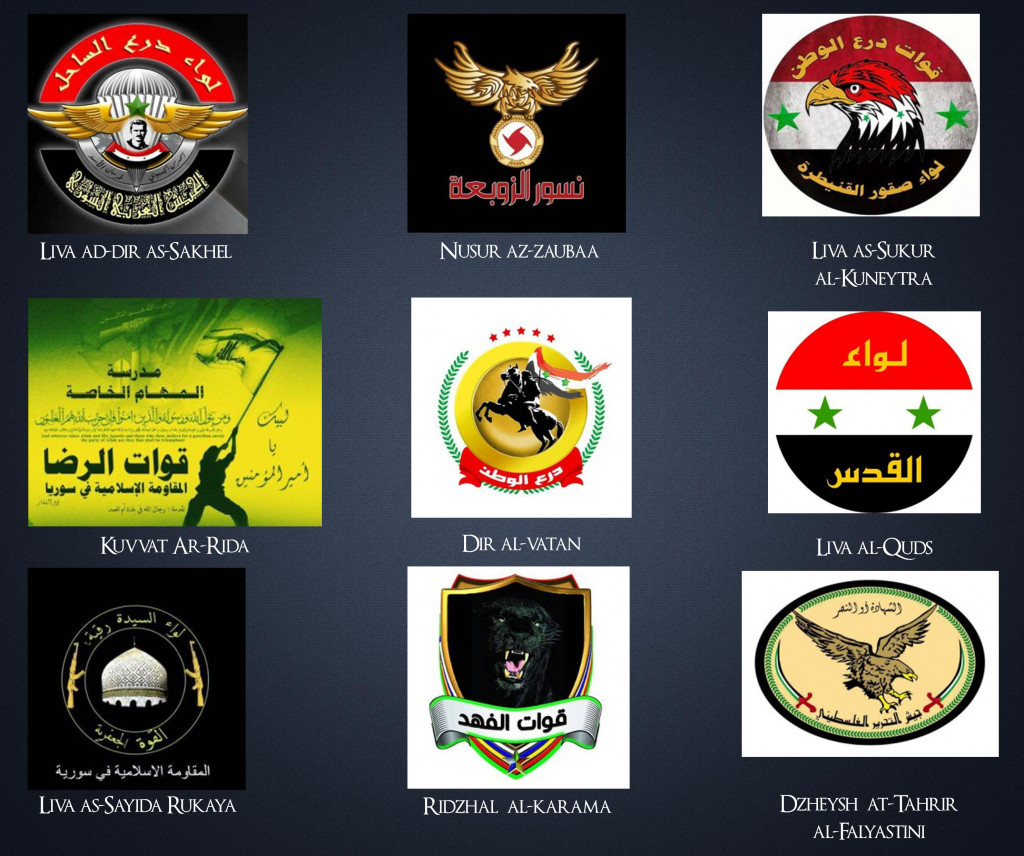 There are multiple Syrian self-defense forces (i.e. separate from the Syrian Army) fighting as volunteers on the side of, but not part of, the Syrian Arab Army (SAA). In fact, there are more such groups than there were in Lebanon during the 1975-1990 civil war, and number perhaps 150,000 troops.

These groups are increasingly important due to losses sustained by the Syrian Army under immense pressure from terrorist groups financed and supported by multiple foreign governments.

In order to keep army personnel at the front and at the same time not lose ground in the rear, which is extremely difficult to do, such groups were originally involved with protecting roads and strategically important centers, and maintaining garrisons in re-occupied territories. Later they were used in operations.

Here is a list of some of these groups:

al-Mukavvama as-Suriyya (The Syrian Resistance) in the Latakia region. Headed by Turkish native Ali Kayali, on good terms with Kurdish leader leader of RPK Abdullah Ocalan. Active since 2011. Self-defined as a secular group that includes Alawites, Sunnis, and Christians, and has Shiite sympathies.

Liva ad-dir as-Sakhel (Shield of the Coast Brigade) provides protection of the Mediterranean coast of the country, first of all, Latakia and Tartus. Another Alawite group that coordinates actions with the government.

Kuvvat Ar-Rida (Reza Forces) military organization, organized from locals in Hama, Homs, and the capital region since summer 2013, when Hezbollah began active actions in the Syrian territory. Mostly Shia and some Sunni.  Named in honor of the Shiite Imam Ali Reza. Should become the base of a future Hezbollah-like militia in Syria..

Liva as-Sayida Rukaya (Lady Rukaya’s Brigade) has purely Syrian Shiite membership and is named in honor of the daughter of Imam Hussein; her tomb in Syria is a shrine for Shiites from around the world.. Other Iraqi Shiite groups likewise affiliated are Abu Fadlya Abbas Brigade,  Liva Zulfikar (Zulfikar Brigade), and Kataib Imam Ali (Battalion of Imam Ali).

Nusur az-zaubaa (Eagles of the Hurricane) participated in operations in Homs and protection the Vadi an-Nasar valley, occupied generally by Christians, and a   lso helping local Druzes in Suveyd region. Syrian Christian militia associated with the Syrian Social and National Party (SSNP), founded in 1932 by the Lebanese Orthodox Christian Antun Saad with an ideological view of creating Greater Syria from Syria, Palestine, Lebanon, Iraq, Jordan, and Cyprus.  Has counterbalanced pan-Arabism with the idea of Syrian nationalism. In addition to the Orthodox Christians, also includes Shiites, Sunnis, and Greek Catholic Christians.

There are also several Druze groups. They growth was especially accelerated in autumn 2014 when Jabhat an-Nusra militants executed and/or forcibly converted many in the Druze enclave around Idlib, which caused indignation

Dzheysh al-muvakhiddin (Army of supporters of monotheism) are active in the province of Suveyd occupied by Druzes. This group is composed of Druzes, allied since 2012 with the government of Syria. It has recently suffered fragmentation.

Dir al-vatan (Shield of the Homeland), in the same area, is the largest Druze group.

Ridzhal al-karama (Men of worthiness) also known as Kuvvat al-Fakhd (Strength of a leopard) was started in early 2014 under Sheik Balus, who was later assassinated. This group was somewhat tied in with pro-government groups, hoping for eventual autonomy within Syria.

Liva as-Sukur al-Kuneytra (Brigade of Falcons of Kuneytra) consisting of Druze and Sunnite natives of Kuneytra province. Had originally fought against both Islamist forces and the government, but went over to the government side after being invaded by Jabhat an-Nusra and ISIS.

Liva al-Quds (Brigade of Jerusalem), founded 2013 and consisting of Palestinians numbering 3-4,000 who are natives of the Nayrah refugee camp near Aleppo, and engage in fierce battles near Aleppo. Not associated with Hamas.

Dzheysh at-Tahrir al-Falyastini (Liberation Army of Palestine), conducts operations generally in the region of Damascus and is associated with the Popular Front for Liberation of Palestine.

The militias protecting the government in Damascus, have already became an important factor in the political life of the country. Upon termination of the conflict, they will demand their share of  power in the territories occupied with them or aspire to political influence throughout the country. This could make the process of political settlement in Syria more difficult.

May God give you a Strong Power to Exterminate and annihilate all takfiris Zio-puppets and war snakes Von us-rael, Amen O my Lord!⚔