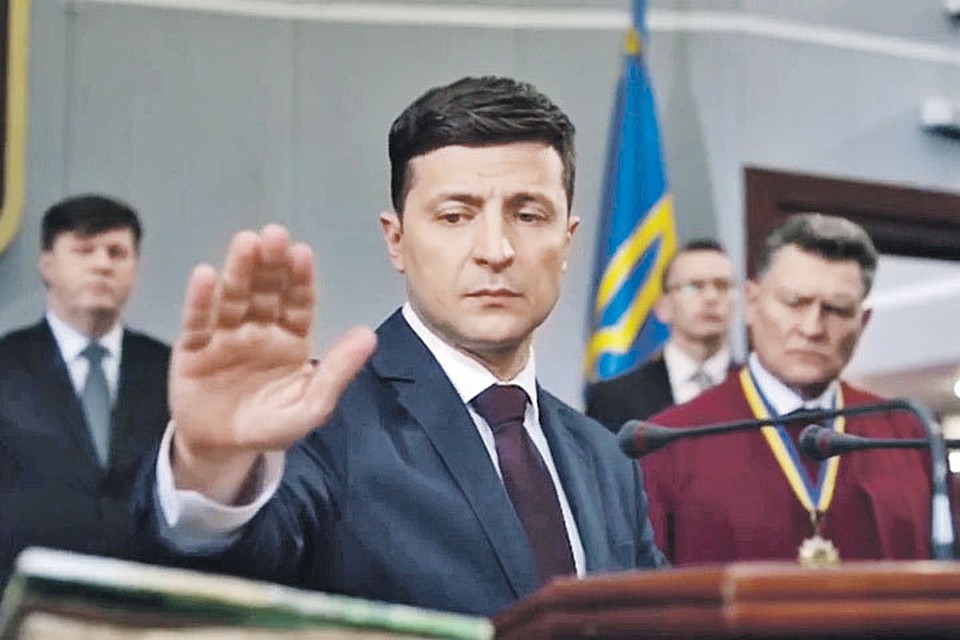 The candidate has already rehearsed his inauguration in the TV series “Servant of the People”. Photo: A still from the film

This article provides a Russian point of view at the victory of Volodymyr Zelensky in the recent presidential election in Ukraine.

Written by Aleksandr Kots; Originally appeared at KP on April 22; Translated by AlexD exclusively for SouthFront

A former stand-up comedian, according to exit polls, is far ahead of the opponents in the lead in the second round of the presidential elections

If this candidate hadn’t been there, it would have been worth inventing him. Because without him, the presidential race in the Ukraine would be completely devoid of intrigue and the element of sudden folly.

Volodymyr Zelensky is the main sensation and phenomenon of the Ukrainian presidential campaign. All the sociologists gave the victory in the first round to him unconditionally, a comedian who has no political luggage behind him. And in the second, his chances against the current head of state Petro Poroshenko were much higher. And it turned out that the experts were not mistaken!

How did the ex-stand-up comedian get to such heights? Or how did the Ukraine sink to such a candidate? 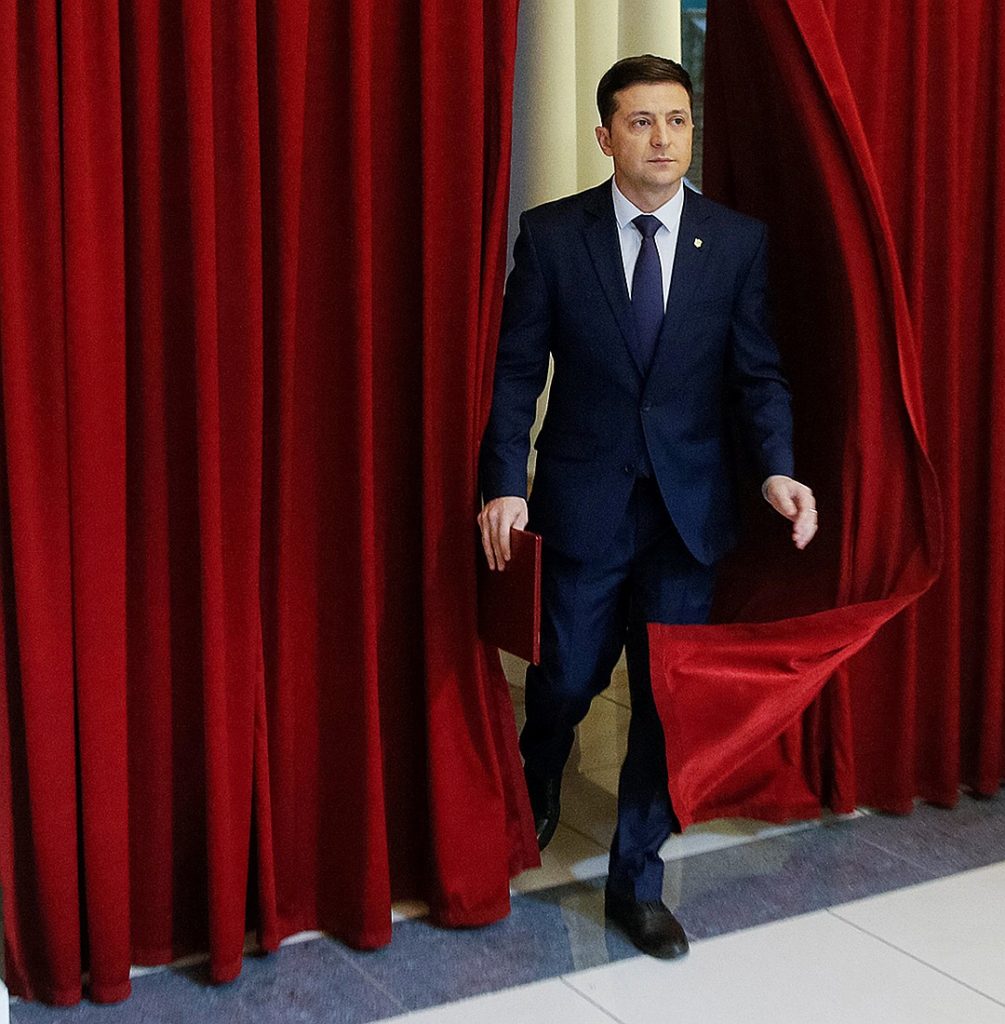 If this candidate hadn’t existed, it would have been worth inventing him. IMAGE: Reuters

Zelensky’s biography tells us eloquently that his is a self-made man, as our overseas partners say, a man who made it all by himself. He didn’t have an influential relative; he is from a classic family of technical intellectuals from Krivoy Rog. His mother is an engineer, his father a programmer, doctor of technical sciences. In his youth, the future presidential candidate tried his hand at all sorts of activities, from Greco-Roman wrestling to basketball, from ballroom dancing to piano. At school, he assembled the first players and met his future wife Elena Kiyashka, mother of his two children.

The successful school experiments with humour determined his future profession, despite the fact that he studied law at the university. First, the comedy club players “95th Quarter”. Followed by a studio by the same name. TV projects, musicals, films, film production, popularity in the Ukraine and Russia, where he still has a profitable business… 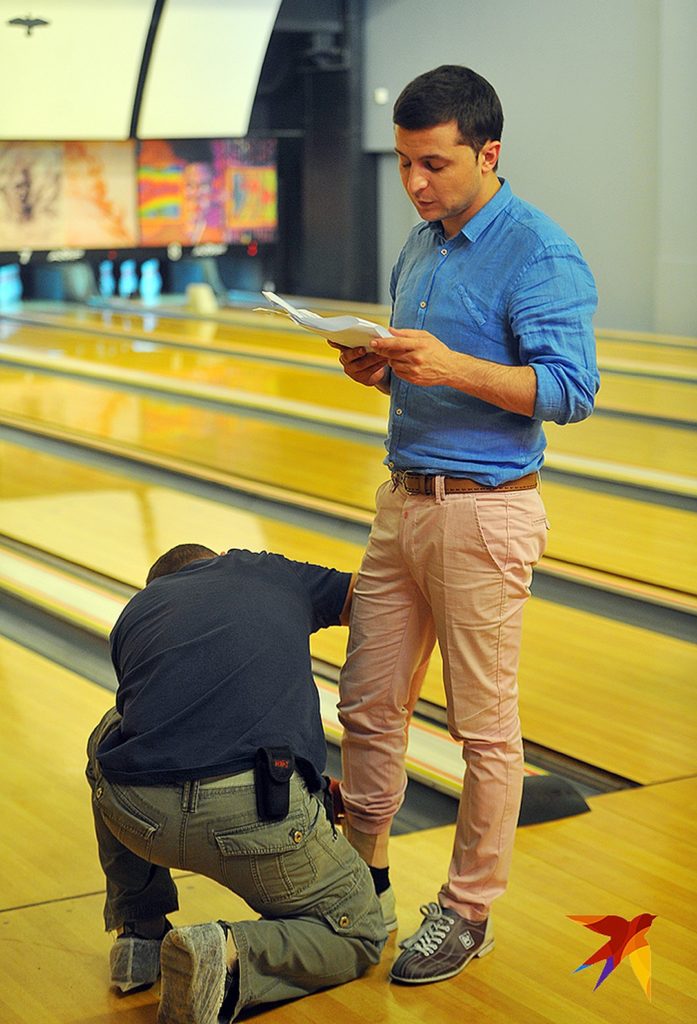 Shooting of the movie “Love in the big city 3”. Photo: Eugenya Guseva

And this is the only scandal that slightly marred Zelensky’s electoral campaign. How so, because Vladimir supported the Maidan, gave concerts in front of nationalists from Dobrobats in Donbass, donated millions of hryvnias to them… And here you are, business in the aggressor country. Three companies that cut royalties off released movies. From 2014 to 2017, they earned $13 million! And without Zelensky’s personal presence in Russia, these companies cannot be closed down. And he’s not going to go to Russia as a right-handed patriot. And while the enemy drops bucks, one of his most commercially successful projects is banned in the Ukraine – the series “Matchmaker”. (By the time he was published, he was suddenly allowed to do it again. Why would they do that?) The main star of the series, actor Fyodor Dobronravov, you see, supported the “occupation” of the Crimea.

But the series “The Servant of the People”, in which Zelensky played the main role, became, in fact, a prologue to his nomination for president. The third season just started prior to the elections. A humble truth-teller, Ukrainian history teacher Vasily Goloboredko is at the helm of the state by the will of fate. An honest, fair president who fights corruption and self-righteousness, this is something the Ukraine has never seen before! But how to bring the country to vote for the film image with which Zelensky is associated. After all, his programme is just a set of populist stamps. You can bet that it’s not so. But there is a people’s request for Goloborodko.

“This is an aversion to the political elite – today’s elite and the one that used to be” shared with the Komsomolskaya Pravda political scientist Mykhailo Pogrebinsky. “People want a new man who is gently oppositional to the current government. He doesn’t run around with pitchforks, doesn’t promise to shoot everybody like the others. He is perceived as moderate. Without radical russophobia, without nationalism…” 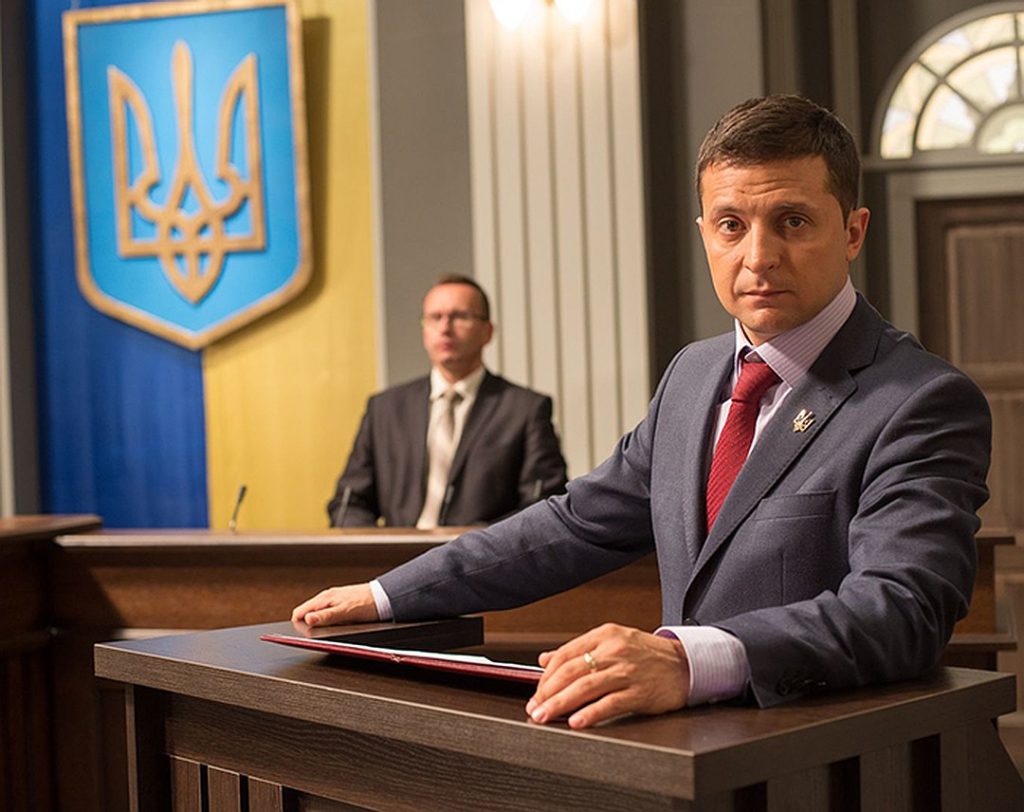 “Servant of the People”, in which Zelensky played a major role, became, in fact, a prologue to his nomination as president

“Of course, this is primarily a protest,” former Ukrainian and now Russian political analyst Vladimir Kornilov said. “After all, the basis of his electorate is the southeast of the Ukraine. Although his slogans to the region are not at all close. The course on NATO and the EU are not about these territories. But they’ll vote for anybody as long as they don’t come to power with those they hate.”

Who stands behind him?

“Kolomoysky said they were friends more than once. If you look at their earlier interviews, they didn’t hide who was behind whom”, Kornilov said. “It’s just that now, closer to the election, they’re distancing themselves a little bit from each other. At least publicly.”

“It is clear that this is largely a Kolomoysky project,” agrees Pogrebinsky. “His channel “1+1”, promotion of “95th Quarter”. But you can’t belittle the talent of the guy himself.”

By the way, on the day of silence on this channel a few Zelenshy’s shows are planned to be shown. A documentary about the former actor who became President of the United States, Ronald Reagan will be presented as well. It was dubbed by Zelensky’s recognisable voice.

The candidate himself says that he has chipped in with his friends for the campaign. It cost him 70 million hryvnias (about 165 million rubles) [Translator’s note: approximately 2.6 million USD]. This is confirmed by the Committee of voters of the Ukraine data. For comparison: Poroshenko spent 250 million hryvnias (600 million rubles) [Translator’s note: approximately 9.3 million USD]. Numerous posters and rallies in support of the incumbent president explain the big difference, where crowds were rounded up with money.

“We have a war with Russia”

According to Zelensky’s latest public statements, it is clear that political technologists have corrected his earlier statements. And if a couple of months ago he was ready to negotiate with Moscow on Donbas, now he declares: “We have a war with Russia. And we need to win.”

For starters, he plans to invite the United States and Britain to the talks on Donbas. And also to deploy an information war, an anti-Russian channel in Russian for Donbas and the world.

“What he’s saying now looks irresponsible and unprofessional,” said Pogrebinsky. “It’s hard to predict if he’ll win from his amateur-level to assert his stupid ideas about everything. Or he’ll start trusting professionals. But if I had to choose between Poroshenko and Zelensky, despite all the scepticism about the incompetence of the latter, I would prefer to vote against Poroshenko. Russia prefers any candidate other than Poroshenko. All bridges for work with him are burned.” 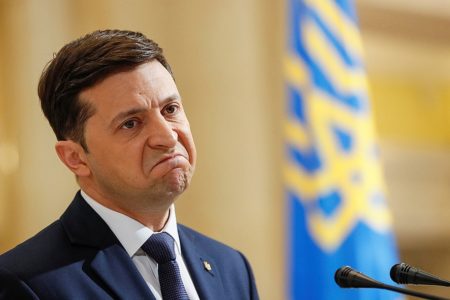 “No one know how Zelensky can be president”, says Kornilov. Many people believe that he will lobby for Kolomoysky’s interests and that this oligarch will govern everything. But I would remind you that Kolomoysky has already won both Maidans in 2004 and 2014. But given his manners, and he thinks he owns everything and needs to squeeze it away from others, he won’t stay in power for long. I don’t think that Zelensky, if he becomes president, will be able to tolerate Kolomoysky’s dictatorship for a long time.”

And Tymoshenko? At least she’s aiming as chancellor of the Ukraine.

“She always does that when she feels she can’t take first place,” says Kornilov. It is clear that those who bet on Zelensky, in case of his victory, will not be very happy if he begins to share power with someone, including Tymoshenko.

TITLE: – HOW THE STAND-UP COMEDIAN BECAME THE PRESIDENT OF THE UKRAINE. ANSWER: – THE WHOLE THING IS A JOKE. SOLUTION: – DEPORT THE SHEMITE-COLONIALIST BACK INTO THE MIDDLE EAST. RESULT: – INDIGENOUS POPULATION HEALTHY AND AT PEACE WITH THEIR NEIGHBORS INSTEAD OF WAR.

But euro khazar jews are NOT semites! They’re your fucking problem, not the mideast’s! The mideast has enough euro khazarian satanists to deal with already! And them khazar jews in occupied Palestine need to be “deported” back to freaking europe, not the other way round!

“…I don’t think that Zelensky, if he becomes president, will be able to tolerate Kolomoysky’s dictatorship for a long time.”

For some reason, the Ukrainian people seem to be incredibly tolerant of being servile to Khazarian oligarchs. Zelensky’s intolerance might be just what they need to wake the fuck up. On the other hand, living on thier knees for so long to the Khazar Mafia makes any kind of awakening highly improbable. Kind of like here in the USA.

Many ukrainians are fighting , the DPR & LPR both have said they are fighting against the coup so in all essence they are a counter-revolution