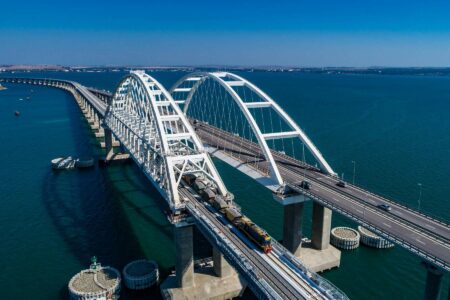 Traffic was restored along the repaired part of the Crimean bridge. The damaged part of the bridge was repaired two months after the the terrorist attack. LINK

The explosion hit the Crimean bridge on the morning of October 8. As a result, a fire broke out and two spans of the automobile part of the bridge were damaged. Four civilians were killed in the explosion.

On December 5, the first line of the repaired road was opened for civilian cars according to the declared plans. The both lines should be launched by December 20.

Russian President Vladimir Putin personally inspected the bridge. He drove over the bridge and listened to the report on the progress of the restoration work of Deputy Prime Minister Marat Khusnullin.

Amid the threats of new attacks on the Crimean Bridge and other infrastructure facilities officially voiced by the Kiev regime, Putin emphasized the importance of securing the land road that connects Crimea with the mainland Russia.

Repair works on the Crimean bridge began on October 12. At first, it was necessary to replace two spans of the bridge, but later it was revealed that four more spans were deformed and should be replaced. On November 19, all automobile spans were installed on the bridge.

The movement of trains and cars was resumed on the same day. Ten days later, trucks were allowed to pass.

In general, the repair of the bridge should be completed by July 1 next year.

From Italy: 🇮🇹 President Putin is my Presiden 🇷🇺 :)

Vlad is a true leader.

history will remember him as Putin The Great one day

How to fight Russian Oil Cap. This is forcing oil prices to rise Solution. The G7 is making sure no single news network reports on price increase due to Russia not selling oil to the G7 or EU

Lol. Market Forces at work. The West is so fake. They keep telling Nigeria and the rest of Africans to increase the price of petroleum while they use price caps.

Fraudulent individuals. Soon the Africans will see the West for what it really is !

Simple. Sell it to India and China at ten dollars below the cost per barrel, and let them flip it to Europe at market rate.

Nice motor Vlad. A Merc from Germany. A hidden signal to Germany?

Biden already lost his licence as he got a medical certificate of incapacity to drive, so you won’t see him doing such a PR stunt.

AM Hants
Reply to  Leviathan

He will blame it on Trump one day and then the next, tell everybody he remembers when he was driving over the Crimea Bridge on the 5 December 2022. Yet, still we are to believe that 81 million voted for Biden????

Didn’t he crash a bicycle recently too?

Dyagilevo Airbase was hit by Ukrainian drones. At least one TU-22 is riddled with shrapnel.

Putin the good man of honor and power ever.

The more they try to dishonor him, the more he keeps his cool eyes on satanic policies

That’s the way to do it. It was lovely seeing him drive a lorry over the bridge, on the day it opened. Now, to see him free, without a care in the world, and again driving over the Crimean Bridge. How things have changed in Crimea, now they are back home with Russia. The same is happening with Lugansk and Donetsk, only it will take a little longer.

Has anybody seen the videos of Mariupol, since it returned home to Russia?

Putin is a true leader.

And keep striking those electrical stations please. Cuts down on Ukrotard trolls.

jens has bridge to all lgbt amerikans