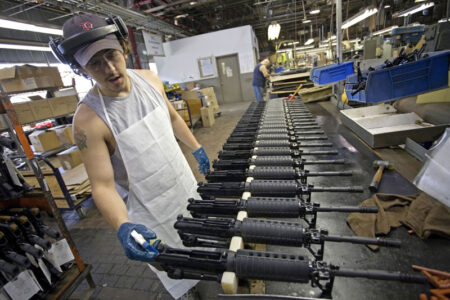 While gun sales have been brisk in recent years, the uncertainty surrounding COVID-19 was a boon for the gun industry. 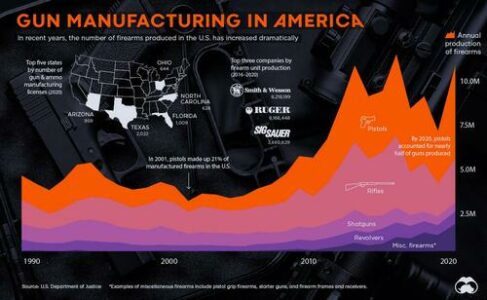 While the U.S. does import millions of weapons each year, a large amount of firearms sold in the country were produced domestically. In the following Visual Capitalist’s Nick Routley digs into the data behind the multi-billion dollar gun manufacturing industry in America.

Gun Manufacturing in the United States

According to a recent report from the Bureau of Alcohol, Tobacco, Firearms and Explosives (ATF), the U.S. has produced nearly 170 million firearms over the past three decades, with production increasing sharply in recent years.

America’s gunmakers produce a wide variety of firearms, but they’re generally grouped into five categories; pistols, rifles, shotguns, revolvers, and everything else.

Below is a breakdown of firearms manufactured in the country over the past 30 years, by type: 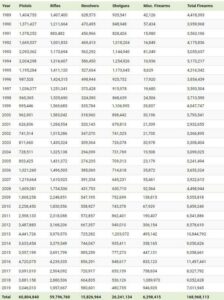 Pistols (36%) and rifles (35%) are the dominant categories, and over time, the former has become the most commonly produced firearm type.

Who is Producing America’s Firearms?

There are a wide variety of firearm manufacturing companies in the U.S., but production is dominated by a few key players.

Here are the top 10 gunmakers in America, which collectively make up 70% of production:

Some of these players are especially dominant within certain types of firearms. For example:

*In 2020, Remington filed for Chapter 11 bankruptcy protection, and its assets were divided and sold to various buyers. The Remington brand name is now owned by Vista Outdoor (NYSE: VSTO)

The Geography of Gun Manufacturing

Companies that manufacture guns hold a Type 07 license from the ATF. As of 2020, there are more than 16,000 Type 07 licensees across the United States.

These manufacturers are located all around the country, so these numbers are somewhat reflective of population. Unsurprisingly, large states like Texas and Florida have the most licensees.

Sorting by the number of licensees per 100,000 people offers a different point of view. By this measure, Wyoming, Montana, and Idaho come out on top.

If recent sales and production trends are any indication, these numbers may only continue to grow.

Quiet kid at the back of the class

Robert’s got a quick hand He’ll look around the room, but won’t tell you his plan

He’s got a rolled cigarette Hanging out his mouth, he’s a cowboy kid, yeah He found a six-shooter gun In his dad’s closet, and with a box of fun things I don’t even know what

Daddy works a long day He’d be coming home late, yeah, he’s coming home late And he’s bringing me a surprise ‘Cause dinner’s in the kitchen, and it’s packed in ice I’ve waited for a long time

Is that the school shooter song?

This lunatic sounds as deranged as a character from Stephen King.

Last edited 7 months ago by Muhammad your Prophet
-5
Reply

You Jews have ruined the rednecks.

Americunts are dumb shitheads and cowards busy killing kids at home and abroad while the Jews eat their launch. No other failed state just kills for the sake of killing and selling guns to kids.

Martillo
Reply to  Quiet kid at the back of the class

Report to the pill department…they got the “medication” that your Slumville edukashun requires. Meanwhile try to get involved in sports or go for long walks in the woods seeing as you are the weedy, brooding type which is brutally apparent in your disjointed, disturbed rantologue. Definitely seek help before someone gets hurt. USSA doesn’t need any more splattered brains all over the place unless of course they belong to the filth that has made Slumville what it is; the most hated, violent, narcissistic hubris bloated shit hole on the planet.

NATO weaponry is getting humiliated in this special operation. USA already dumped it’s Stinger stock on Ukraine, and it will take 4 f*cking years, to replenish 1500!!! missiles. The problem is that Ukraine needs 500 missiles A DAY to keep up with the Russian Air Force. USA is not a superpower anymore, they don’t have the military industry they once had because of the huge inflation and chip shortage.

I’m an American gun owner and am very happy I own guns. Guns keep the Jews from a complete Soviet takeover like what happened to the poor Russians and their satellites when the communist Jews took over. Yes people die yearly from gun violence (vastly disproportionate black on black). But you’d really see killing going on if Jew communists took over (and they’re working on it). So I’m willing to tolerate the occasional school shooting and the rest, in order to keep my family from going to a Jew run gulag.

The school shootings are likely to be Deep State MK Ultra victims anyway.

Notice that there us a increase in production during Democrat Presidents tenure. Except during Teumps turm. Thats when democrat supporters bought firearms.