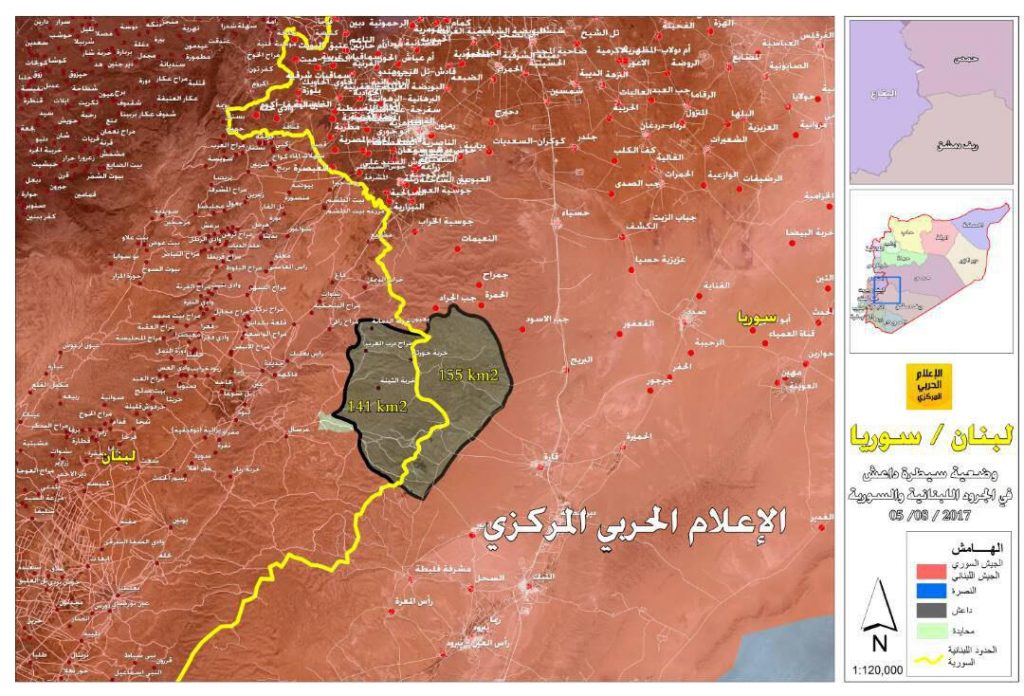 The Lebanese Army, backed up by Hezbollah, has started a preliminary shelling of ISIS positions at the Syrian-Lebanese border.

The Lebanese military started preparations for a large-scale military operation against ISIS in the area following the successfull Hezbollah advance against Hayat Tahrir al-Sham that led to a liberation of Jaroud Arsal from the terrorist group.

According to reports, the anti-ISIS operation in Lebanon will be led by the Lebanese Army. At the same time, Hezbollah, backed up by the Syrian Arab Army, will advance on ISIS positions in Syria.

Israel will be furious!!!

One problem though will be what to do with ISIS prisoners , especially those taken by the Lebanese as if the US is involved I suspect they will be freed in other parts of Syria and Iraq or even sent to the Philippines .

Yes, USA must not be involved, but how to avoid this ?

That is the question. The US is obviously putting pressure on their assets in the Lebanese government. It may be that the US run away as ISIS are far more experienced than the Lebanese Army. Hezbollah will push ISIS into Lebanon and when that happens the Lebanese military will need Hezbollah’s battle experience. Israel will not tolerate US interaction with Hezbollah I am sure.

Damn. Cooperation between arabs works. Why don’t they solve their problems by themselfs. I think that is pretty simple.

Or wait for USA to help the ennmies and them try to “help” you.

Why you so hard on Arabs??? Ive read your posts before and you’ll probably say nothing you’ve havent said before, is there ulterior motive.You promote the Kurd, cause why, they are so deserving cause they allowed the word democratic to be attatched to their name???. Do you think they are so different???? . I didnt realize it till now but the WAPO was runnng a very similar campaign to what it is you present here, they were deliberatly trying to target peple like me by presenting the kurd as leftists, socialists. I as a matter of practice, blow off anything everything Wapo and rightly so because what they present is no longer leftist for the orientation is all wrong what they present is lefty with the kurds having to do a percept management facade in order to fit the shoes

I promote the kurds ? XD. I think you have never read what I’ve said.

I just tell where are the main problems. And arabs are the problem for themselfs.

The problems you say are only Arab is actually very simplistic but you miss the all encompassing fact that religion no matter has been used by opportunists for their own desires throughout history, while they interpret as their own ideals while feeding their fanaticism and instilling this into others while pushing an agenda. The madmen are always controlled to achieve the desires of others.

Man is a based creature there are those mostly propelled by greed and the desire to control others. This will always be the case that happens , but for some we are able to surpass this but you always have those whom remain that based creature.

I looks like that you do not understand correctly the origin of conflicts. Mainñly, they are produced by USA, and USA enter its big foot to take advantage of this. Nobady is waiting for the help of USA but its puppet governments.

Of course, they are produce by USA but the main actors are arabs. Why are they so stupids to destroy their own countries ????

Yes they are, fanaticism is everywhere, do you remember Germany before WWII ? how almost a full nation could do what they did ? but the main responsible, of course, is the leader (in Syria case is USA-NATO-Israel).

In this point you are right, but humans are humans independently or their nationality, color, or believes. The zionists, for example, they believe they are the only humans in the world, the the other are just animals with the figure of humans.

Well. Who was fighting Germany in WW2 ? Globalists and communists. Communism has failed. Remain globalism. just think about that.

On the spirit spear of Jhenghis Khan was tied his hair along with the hair of his mount and they did what they did in swift as they flew across the ground. You call him animal in a derogatory way yet you will never match accomplishments that reverberate even today without crediting his name, he shaped modern Russia Iran and China, he influenced Islam You present the Jew as Tarzan and i laugh at you

and that is just one of countless so called sphinxes you think to educate me on.

you people are unqualified, but then again who am I to you, nobody should care about. i don’t know you, you don’t know me, and that’s alright. I’m not looking for friends, but i do actually believe one of those sphinxes reached out to say a simple word, friend

Finally ? Pufff, do they have to wait almost at the end of the war to do this ?

The lebanese army has to ask USA before acting in their own country. XD.

It’s like in Iraq. The iraqi army bought F-16 to USA. Then they have to ask authorization from USA to use them !!!!

Of course, USA waited 2012 to sell them some old F-16. USA was preparing ISIS. They didn’t want the iraqi army to face ISIS before it expands. Otherwise, USA plan will have been doomed.

For me, it’s clear crystal and most of the dots are connected.

ISIS on the border means lingering for a political decision from Sunni parties within, The answer has just arrived