A video, showing the T-72 main battle tank, twice slipping away from hitting of the US TOW-2 antitank guided missiles, has been published online. 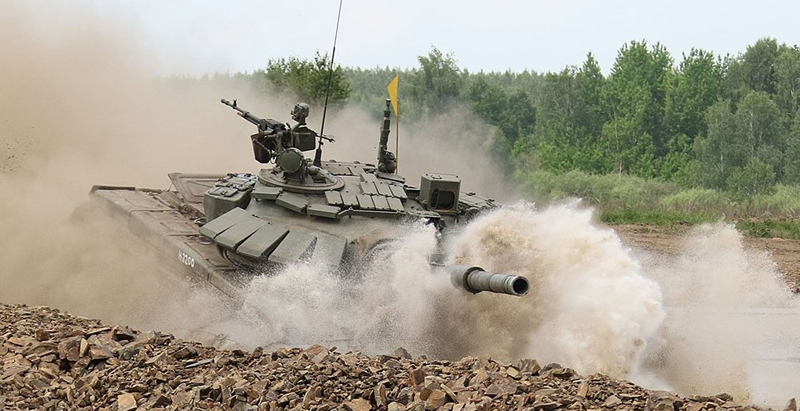 Syrian crew has twice saved the T-72 main battle tank from hitting of the US TOW-2 antitank guided missiles. A video of the incident was published online.

During a battle in the province of Hama, the Syrian tank came to a firing position from a coverture, launched an aiming salvo fire, and then rolled back again. This tactic has long been used during a fighting in a city and on an open terrain.

Terrorists, armed with the US TOW-2 heavy anti-tank missile system, tried to ‘catch’ the T-72, when it was firing. The first missile of the terrorists flew over the tank at the very moment, when it has started to move behind an embankment.

The guided missile, which flew close, did not scare the Syrian armor crewmen, and they continued to fire on the terrorists’ positions, despite the work of a crew of the anti-tank guided missile system. Soon after this, the terrorists made another attempt to hit the tank. They again fired a missile at a time, when it came to the position for the next shot. Professionalism of the crew allowed to save the tank from the struck. The video shows that at the last moment the T-72 hid behind the embankment, which the missile struck.

As result, the tank and the crew did not suffer, and the terrorists lost two expensive missiles – according to open sources, the price of one TOW-2 missile is about $50,000.

CONCLUSION : Alahu IS NOT Akbar !!

both sides are muslim, mate

the ones are zealot idiots, the others are muslims because of the tradition. don’t u see a difference there? To brag to be a muslim means you are a fanatic a moron, who lives in an age of 1000 years back. Who braggs to be muslim jew or what so ever only so? only idiot. Leave your religion at home, when you go out. Abraham religions are the biggest marsm on the earth. for whites jews invented christianism, for color people islam. We, whites, we piss on christianism today. But you moslems, are totaly on. 1ooo years backwards.

wow, so much hate in you. you seem to need a spiritual guidance from the religion of peace.

I’m thinking the tank crew didn’t even know about the first missile till after they got out of their tank. ^.^

Wise employment of Tanks, its unfortunate they had to learn this tactic from so many hits. Hope the crew continues to punish terrorist and survives the war! Good job SAA!

Forward ops, and no communications with the tank crew is an rely risky tactical and dangerous move.

I am a bit concerned, since its obvious NO personal with this tank, and they dont need to stand on top of the tank but have an elevated position in the close approx, of the area of engagements.

We cant see if the Tank fired just, not entirly random but at or into an general direction, but misses the crew behind the TOWs, both times.

I could see this forward op points immediately. And of course its dangerous, war is that.

And they have now figured out that an tank is like an person, use the terrain. That was indeed close. Lucky ones, knock on wood.

Does price of the missile really matter in this proxy war by great uncle Sam?

They don’t care about the price of the missiles, they are using them by the thousands. US provides the TOWs and Saudi Arabia pays for them.

I dare say the tank crew wouldn’t know they had been fired upon with the hatches down. Luck on the Syrian side and bad judgement on the side of the terrorist murderers. The US suppliers are $100,000 richer.