The Hezbollah media wing in Syria has released a video confirming that the key town of Muhammadiyah in the Eastern Ghouta region, near Damascus, is now under control of government forces.

Separately, the Syrian Army and its allies have relaunched their effort to retake the town of Rayhan in the northeastern part of the militant-held area. Intense fighting is now ongoing there.

Earlier on March 6, the Russian military offered militants a safe passage out of Eastern Ghouta. However, local militant groups rejected the offer triggering further military operations in the area.

the town rayhan is libered!!!

There conflicting information about Rayhan liberation. Some source saying that 90% is liberated

Ask PMU to liberate east Syria. US is in “operational pause” for those who believe USA.

perhaps menopause would be a better word.

A woman with the menopause is a dangerous woman indeed :)

There are roomers going around that local leaders from Hamouriyah and Mesraba would like to hand over the two cities to the Syrian Army. If such information is correct or is not, hard to say. Defiantly will help SAA, but would be advisable for SAA approach those cities with cautions.

Meanwhile, here in the UK, our now totally ridiculous BBC & other MainSlimeStreamMedia are still shovelling out sh1te about the evil Assad Regime attacking the poor rebels & civilians with barrel bombs & poison gas.

But now even the newscasters can’t keep a straight face, sometimes: They know they have been given nonsense scripts to spout.

The Mad AngloZioU$Asylum Empire is now an object of ridicule.

True especially the BBC a very fake news portal.
Totally disgusting that western MSM supports terrorism while they cry terrorists killed them in England yet sanctions Syria killing terrorists for them.

Plain hypocrisy in journalism? (or anything in life for that matter) Say it ain’t so!

Don’t make evacuation deals no more. It makes operations too difficult as the terrorists wait to destroy everything before being evacuated without consequesnces.

I would agree. It’s too late for any deals

the indebted have spoken.

somebody hurry up and execute their directives.

yes, just finish the job ….
There are US and western operatives in there .

OH SHIT they are Triggered! Just like the U Ass of A is Triggered :)

Someone (not USA) needs to build some Ironman suits and kick some terrorist asses. XD.

Aldrich Killian (the globalists) must be destroyed. Their puppet the Mandarin (Al Baghdadi) has been destroyed.

Harasta will be isolated be this weekend, Duma too will be isolated soon after. SAA will clear these areas before moving in to the rest of what’s left from Easter Ghouta.
Civilians will play major role in helping SAA to capture their rest in coming weeks.
In my opinion by end of March we will see a different map defining Easter Ghouta.

Tell PMU to liberate east Syria and you will see USA restart their “operational pause” with no fighters. XD. Remember that SDF means “Swapping Daesh Force “.

The iraqi prime minister went to France. There, Macron tells him to dismantle PMU. The dots are connected.

The pro militant media is claiming there are 400,000 civilians in east ghouta. That is certainly a lie. But If you don’t provide any estimates the propaganda will be treated as fact.

I suspect 400,000 is double or triple the actual number. Would like to hear other voices.

Well it was 110,000 in Aleppo and 6,000 Terrorists and the White Helmets were on those buses, But Fatboy Elsalmo is back to his old tricks , 4 then 8 barrel bombs etc , we will see that around Duma again. The Terrorists put the people into underground tunnels during the truce.

It’s funny to see how the western imperialists are all now engaged in defending their terrorist proxies in East Ghouta while not giving a single fuck about their TEMPORARY allies the Kurds getting beaten by Turkoids. :P

The west can’t deal with Erdogan at the moment. France asked to stop the operation and even called security council. USA asked for a humanitarian pause.
Erdogan is also anti-Assad.

Erdogan outsmart them with the fake coup.

This is the map of top part of East Ghouta at around 19: 30.
We may see the long awaited split sometime tomorrow. 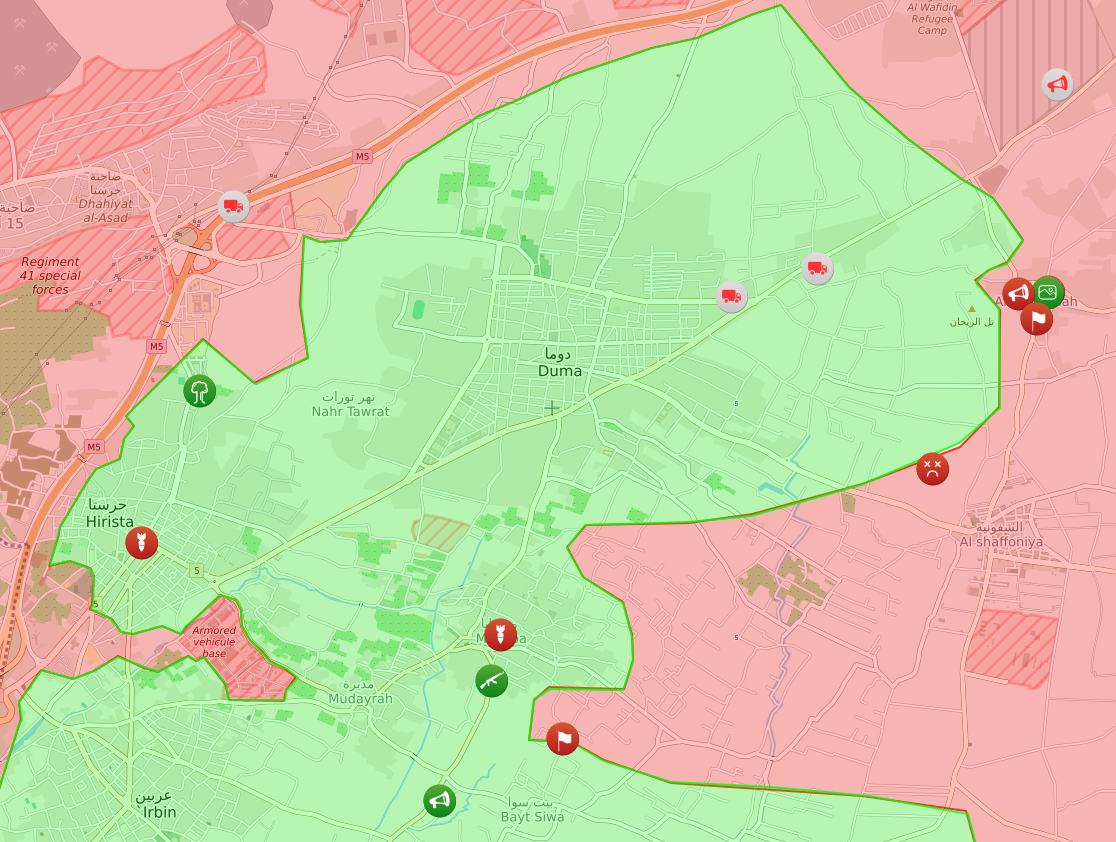 Harrasta will be freed then it will be Aleppo all over again!

There is a report that the terrorists have hampered the use of SAA vehicles in some of the Ghouta farmland by opening sluice gates to cause localised flooding.