Mozambican media released a video of the port city of Mosimboa Da Praia. The city was captured by ISIS militants in the second half of 2020 and as of March 2021 authorities claimed that it was liberated from ISIS. Nonetheless, the video from the ground does not show any troops on the streets. It looks like that the port city became a no-man land that is not controlled by neither party.

Zio-Jew jihad that brings misery to Muslim countries only, occasionally to Europe as well and never attacks IsraHell. That is the Zio Jew jihad the Jews love!

Never attacks the U.S. either. Incidents like 9-11, Boston Marathon bombings, and others were all inside jobs orchestrated with the help of the U.S. military, C.I.A., and FBI.

America has become so powerful that for decades, its only enemies have been WITHIN the system. The “war on terror” failed, and so now they’ve turned to the fake pandemic.

The fake pandemic, genetic-engineered drugs (aka “COVID vaccines”), Gates buying up 75% of U.S. farmland, insidious water contamination (“treating with fluoride”), and orchestrated war in the Middle East will not lead to anything good.

I suspect that the masking nonsense along with the vaccine rollout will make the next generation of youth SERIOUSLY messed up. There may not be a next-to-next generation.

But rather than going down that long, painful route…I truly hope actual nuclear warfare occurs and the world gets destroyed. The end is near.

US ‘re not comparable to EU simply because EU had (still has) deliberate, planned, huge Muslim illegal immigration problem.
Many paperless ex-terrorists arriving to EU in big numbers, from Pakistan, Afghanistan, Irak, Syria etc.
While for the US there is very tight air traffic passenger control.
On the other hand almost everybody in US is registered with personal data including even DNA data (specially Muslims) in government data banks.
US has “anti terrorist” agreement with majority of “allied” countries. To get the access to the police information’s on everybody. Including Muslims travelling to US (including info on their bank accounts).

No “war on terror” didn’t “fail” at all !
Everything is going according the plan.
They use jihad for Zionist objectives and label all Muslims as terrorists in the same time = that is “war on terror” !
US and Western countries + IsrAHell did exactly what they wanted.
After US have created Al Qaeda, they have decided to create ISIS and were hoping that Caliphate will destroy many Arab countries. Some it did destroy.

US/nato invaded Afghanistan looking for lithium and a scapegoat in a cave sitting next to a dialysis machine. They then invaded Iraq looking for another scapegoat, oil, and whatever else they could find. They invaded Libya to look for another scapegoat, oil, gold and other financial assets, Western banks didn’t like the idea of a gold backed Dinar.
The US/nato/isreal/saudi then trained, armed, and backrolled thousands of fanatics and told them to employ as many murderers and thieves as they could find and invade Syria so that US/nato/saudi oil & gas pipelines can be laid across the country. The suadi regime obliged by supplying criminals from their gaols.
They are now doing the same in Africa. Maybe all the trouble, expense, and delay are making the nato cabal look for easier targets?

There is no question that the climate is changing for a colder future. This is going to push weather systems south. Africa will see a lot more rain which will be good for crops, whereas the northern latitudes of the planet will see more snow and ice. Not so good for crops.

So energy and food is going to become critical and the US/nato seem to think the answer is just to take someone else’s stuff rather than do anything constructive about the problems their farmers are going to be facing in a few years time. The next magnetic reversal is just a few years off apparently and our sun is slowly closing down.

I’m not sure about your last two paragraphs, but your first is spot-on

Just hang around Dennis. This isn’t something the planet is going to avoid and no amount of UN planning and money will make a difference.
Gates wants to inject particulates into the upper atmosphere! That will make a difference and exacerbate the problem, potentially killing millions of people across the planet. He isn’t called Kill Gates for nothing.

Food prices rose 7 fold last time the human race faced a planetary cold period. Food prices are rising as we type and most of america is still flush with snow and ice. It’s nearly spring and there is five foot of snow expected in the next few days.

Not trying to convince you or anyone else otherwise, Dennis, but there is solid science behind global cooling. Increasing CO2 does affect climate, but the argument now is how much effect does it have considering the sun-driven and sea-driven warming/cooling cycles.

– Early climate studies ignored sun irradiance and assumed it was relatively constant (on average)
– Later climatologists attempted to model climate change, but couldn’t explain a significant variations in the data. Modeled without it. Excuse used: it’s not an exact science. Model is close enough (for Bill Gates).
– Even later climatologists reluctantly admit solar irradiance variations explained some of the data, but didn’t fully explain the variations, so it was irrelevant (to Bill Gates).
– Then the solar and astrophysics people looked at the energy earth absorbs from the sun, and said there were two significant parts: the sun’s irradiance and it’s particle streams. That made the data fit climate models better, but not and exact match for what was observed = conspiracy theory (to Bill Gates).
– Now the ocean guys have hopped in and better explained the massive amount of heat the oceans store/release in cycles. Short-term sea surface temperatures explain short-term (years) climate effects. Deep sea temps explain decades- and centuries-long climate variations. Climatologists: Bullshit. CO2 explains everything (to Bill Gates)
– Climatologists heads explode. Irradiance cycles sensitive to CO2 blocking create immediate or lagging (year or two) climate cycles. Climate heat is stored/released in sea surface in years-long cycles. Sea surface heat is also stored/released in the deep ocean over decades or centuries long cycles corresponding to solar cycles. Climatologists say they will ignore three layers of dangerous conspiracy theory: solar irradiance, particle forcing and sea storage. Banning any mention these on Twitter is the only answer.

Maverickstar on youtube build his own CO2 meter to see for himself and found with him in a room by himself saw readings over 1000. So this means whenever people visit bars, restaurants, cinemas, etc, they will experiencing levels in the thousands without even noticing.

The CO2 levels have been tracked through time since before the dinosaurs and found to be much higher than they are today. This didn’t kill off the small wildlife or the insects, nor possibly the humans who could have been around at the same time. Fossils showing human footprints found on top of dinosaur footprints seem to confirm this theory.

If CO2 levels drop too low on this planet, plants will die and us shortly after.

Sun irradiance will change over a very long time period as the earth’s orbit varies from more eliptical to more “round”. Whereas CO2 is changing at an extremely fast rate. Below is chart of atmospheric CO2 versus emissions. 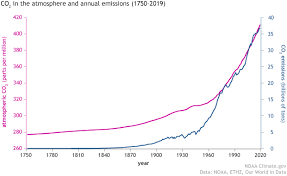 ALCIASIS is very much responsible for this devastation

The Communist government in Mozambique cant do a thing. They must resign and allow democratic elections. Hopefully a Christian government is elected and droves out these Muslims.