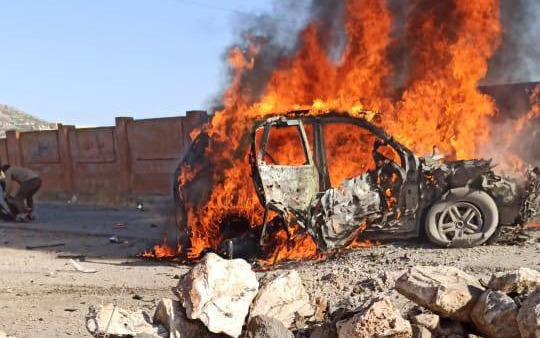 The aerial footage released by RusVesna were taken by a Russian drone which was tracking the three commanders. The commanders were reportedly located with advanced electronic intelligence systems.

The commanders were most likely targeted with a Russian 2K25 Krasnopol laser-guided artillery shell. Their vehicle was apparently painted with laser by the drone.

Russian and Syrian forces fired several Krasnopol shells at militants’ positions in Greater Idlib in the last few days. At least four militants were killed by the weapon in recent strikes.

The targeted assassination of al-Shami and his comrades was a major blow to HTS and its backers, including Turkey. Ankara’s forces and proxies responded with artillery strikes. The situation in Greater Idlib may escalate even further in the upcoming few days.

The drone video quality is exceptionally bad. Was it deliberately degraded for publication? Any civilian drone can return ten times better video than that.

Trolls can be funny, but not you. You are just an unfunny shitposter, a miserable tech support scammer who lives in the toilet world beneath us.

This is over Idlib – the Russians are running EW systems there – presumably there is electrical and radio interference all over the place! Doubt the Russian’s are too worried you are upset about the video quality…

Last edited 1 year ago by Fog of War
1
Reply

TEP
Reply to  Fog of War

Stop showing your ugly ass mother to us and go suck on your 10th father bitch.

The end
Reply to  Fog of War

oooooooh, is that Bilal Abdul Kareem on the pic, shagging a jeewie? Sure looks like it…

It needs to escalate because the current indefinite ceasefire is allowing Turkey & US terrorist proxies to fortify their occupied Syrian territory while SAA, it’s allies and Syrian civilians are being systematically killed. TEP.

If this is the typical video quality the Russians are having to work with, then it’s a miracle they ever hit anything at all. This shows the Russians are damned good at what they do, to locate and target one specific vehicle, and actually hit the thing while it’s moving, all while saddled with such crap electronics and potato-quality optics. Meanwhile the US with 10x bigger budget and vastly superior gear can’t even make a dent in the Taliban and is losing the battle on every front.