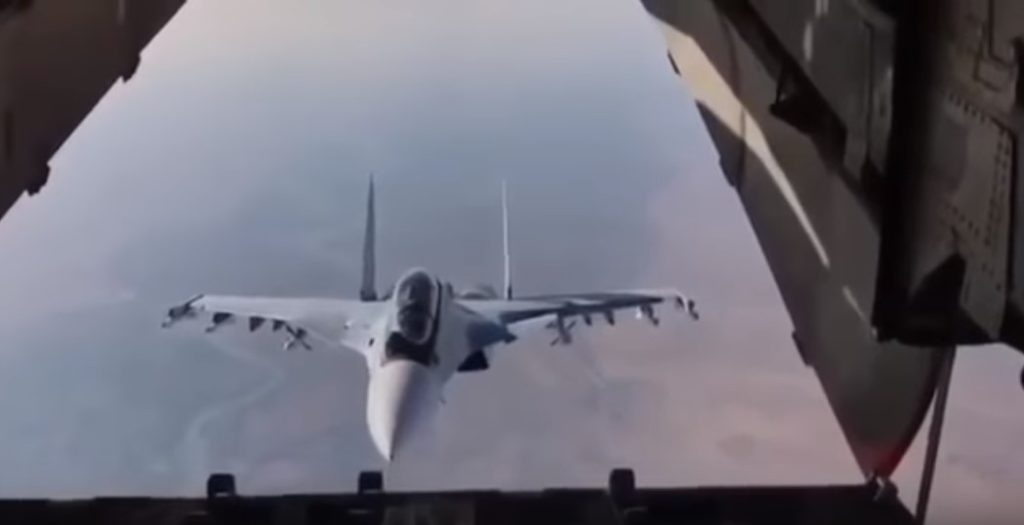 A rare video has appeared online showing a dangerous maneuver of the Russian Su-30 fighter jet near an Il-76 cargo plane. The fighter performed an aerobatic stunt when it was accompanying the cargo plane during a routine mission.

The event allegedly took place over the Syrina province of Deir Ezzor. However, it is not clear when the video was filmed.

Nice fly! It looks like the fighter pilot wanted to land inside the cargo plane:)

I think that Russian pilots are the best in the world. real sky artists, just the opposite of Yankee cowboys, I remember when some US airforce pilots flew so badly that their planes cut the cables of a cable car in Italy, making it drop from high and killing everybody who was inside.

in regards to sky artists, i invite you to searchthe web for the performances of us navy pilots at home drawing penises in the sky and attracting lots of plaudits for the feat Lmao.

They were drawing selfies John. :)

they are not. compare simply their flight hours with other countries. in syria sent the best 100 of the 4000.

Published documents state that RuAF pilots perform more flying hours than all NATO countries with the possible exception of the UK (this in 2013). It’s likely that this has changed in the latest years.

i know a lot. russian soldiers are heavy drunker.

whitecock! what do you think, allows the russian flight protocol such stupidty, i tell you: does not allow. this guy is not a hero, but nobody, who ignores the rules in army. of course, the armchairgenerals of this forum, hourly masturbates, because they think, they are the same guy. :)))

He is probably a fan of English football, and it is easier for him to shift his shortcomings to others than to admit that someone is better.

“he armchairgenerals of this forum, hourly masturbates..”

while you do the same watching us navy pilots drawing dicks in the sky at home.

usa Last year, the average rose to 150 hours with a slight uptick in funding and by rolling in the surge of flying time accumulated during combat deployments. To put this into context, in the 1980s and ’90s, Air Force fighter pilots averaged three to four sorties a week, flying over 200 hours a year in order to achieve “full spectrum capable” readiness. It enabled them not just to sustain proficiency, but to improve their skills.

There’s a pretty well-accepted formula for this. When pilots fly only two sorties per week (averaging slightly over 100 hours per year), their skills decrease with every passing week and the likelihood they will be effective or even survive in combat drops precipitously. Fly three sorties a week, and they sustain their baseline faculties. Fly four sorties a week – at least 200 hours a year—and they get better at everything.

so, as i told, russian pilots do not have enough flight hours. the same situation wt all other units. there is no money for fuel. etc.

Is Russian VKS commander not official?

these 200hs are in syria. i am talking about flight hours in rest of russia, not in the warzone! the russian pilots in homeland flight really few hours.

You are not inattentive and have fragmented info from untrusted source also. Russian AF are rotating pilots in Syria. What you think how many ones took part in combat operations from the start of battle?

your data is from the mid-90ies, like the ludicrous affirmation that “there is no money for fuel. etc”

Russian fighter pilots are insane. Some would say they’re having a death wish, I’d say its the opposite. They just don’t fear death. I love the SU-30, it’s the coolest looking fighter in the world right now.

As for the when, considering they were dropping supplies I’d say it was when the siege of Deir Ezzor was still on.

the maneuver in itself isn’t all that clamorous.

actually it should be seen as a sign of high morale in the VKS forces in Syria.

It should also remind those users claiming that the USAF is denying Syrian airspace to the VKS that they are out of the reality.

There are also current news about a US F-22 clowning aside 2 SU-25s and trying to prevent them to bomb an ISIS base in east Syria being chased off by a SU-35 which got on the scene.

Yeah, I’ve heard of this – F-22 quickly retreated when Su-35 arrived to see whats going on.

Google is paying 97$ per hour,with weekly payouts.You can also avail this. On tuesday I got a brand new Land Rover Range Rover from having earned $11752 this last four weeks..with-out any doubt it’s the most-comfortable job I have ever done .. It Sounds unbelievable but you wont forgive yourself if you don’t check it fc164d: ➽➽ ➽➽;➽➽ http://GoogleHomeCashJobsSocietyOpportunity/earn/hourly… ★✫★★✫★✫★★✫★✫★★✫★✫★★✫★✫★★✫★✫★★✫★✫★★✫★✫★★✫★✫★★✫★✫★★✫★✫:::::fc164lh

I have some experience with DCS combat simulation (with pro controls and virtual reality) with Su-27, Su-25 and some others (but no current Su-30/35/34) and I have to say that matching your speed with another plane is one of hardest thing to master. In other words – flying in close formation is extremely difficult. DSC is as good as it gets (I doubt that mil spec simulators have any more advanced flight model).

huh, you are an experinced pilot!

When did tis happen? Do u have a link to this information?

Google is paying 97$ per hour,with weekly payouts.You can also avail this. On tuesday I got a brand new Land Rover Range Rover from having earned $11752 this last four weeks..with-out any doubt it’s the most-comfortable job I have ever done .. It Sounds unbelievable but you wont forgive yourself if you don’t check it fx161d: ➽➽ ➽➽;➽➽ http://GoogleInternetPremiumCommunityWorkFromHome/make/more… ★✫★★✫★✫★★✫★✫★★✫★✫★★✫★✫★★✫★✫★★✫★✫★★✫★✫★★✫★✫★★✫★✫★★✫★✫:::::fx161lhhh

unfortunately not only pilots, bt most of the population. the whole internet is ful with videos of plenyt of russian darwin prized idiots.

this self-+destruction mentalyty is the anchor, which does not allow to trensfer them into normal society. pyotr velikiy (the great), iwan groznyy (terrible) and many others fought their don qijote wars against this phenomena. the tatar centuries were not seful for russians. :(

Solomon. I do not speak English, but I came here and read your comment, with the help of this Shaitan machine called Google translator. You probably know Russian or Armenian and you will be able to repeat your comment on one of them. And that’s awfully interesting for a learning the language I am already too old (((((

“Everybody has always underrated the Russians. They keep their own secrets alike from foe and friends.” Winston Churchill HOUSE OF COMMONS, 23 APRIL 1942. Solomon Krupacek did you ever estimated what will your life be like, when USA falls? You know, Internet remembers everything, so it’s like Bob Marley’s song: “bad boys, bad boys whatcha gonna do…” I mean: “what if”? it is not a straight prediction, but one of the probabilities, that merits to be estimated.

history. today is not the same situation. like the bundeswehr is not wehrmacht.

and dont forget, dyedmaroz (papa winter) significantly helped to russians. also the fact, that at moscow began the inland of russia. germans walked 2000 kms and realized, they ar only in ante-chamber. with incredible long slogistic lines.

Well, same thing was with the Napoleon. You know, one is just an accident, tow is statistics. BTW I can easy explain you logic of the SU-30 manoeuvres but do not see any reason to do this.

Sol, you are a constant and prejudiced misery – you just can’t go a day without your anti-Russian, anti-Slav diatribe.

not prejudiced. why are you not able to accept, that somebody knows russia??? i speak russian, i am better in russian litreature then the 90% of russian, i visited almast 2 dozen times ussr/russia/ukraine. i check informations countinouosly, for decades.

Prejudiced because you indicate a very strong and consistently anti-Russian and anti-Slav attitude – using standard negative stereotypes – that is very basis of prejudice against another ethnic/ national group. In fact, within your own above reply, your incredibly pompous claim, to be, ‘… better in russian litreature then the 90% of russian (sic)…’, is evidence alone of your disdain for and prejudice against Russians.

bullshit. i describe the problems. you ignore the problems. i saw already one times, the same problems defeated russians. they lost the cold war, lost WP, lost ussr. also the ruasian populated territories. now i see, again do the same thing. and again there is a lot of brainwashed people, lakie you, who applause to corrupt russian governments. boy, yearly several (dozens, sometimes 2-300) pieces of military equipment is nothing for the futurre. only mass production of quality goods is the garantee of future. also guarantee for high number production of weapons in case of need. aalso in SF one year ago criticised in nice, long analytical article the low ability of russian military industry to produce enough weapons for syrian war. and this is little war… also if there is no real science and production in civili sphere, russia will slow down. and i see this agony already now. you not. but the agony is present.

sure, i know better rusisan literature then 90% of russians. we had hard exam from russian language and literature. you know nothing bob, but you like criticise. btw., do you know any russian singers, actors in theater, ballett dancers, componists? i doubt. but i do. i listen weekly russian productions. grow up boy, and hate less!

You entirely invalidated yourself by attempting to patronize with the use of the term ‘boy’ – not just once, but twice in case anyone missed it. For any actual adult, that is classic sign of someone operating from a position of overt and defensive intellectual weakness – it is an attempt to try and establish hierarchy and talk down, minus any real counter-argument of substance. Resorting to patronizing language indicates you are deeply compromised in your argument – and is deeply ironic you should tell others to grow up when you are operating in this manner. As for your claims that you are more knowledgeable than 90% of Russians about their own cultural sphere – am still waiting for you to qualify how you have come to both this conclusion and that exact specific percentage value? As for your concluding remark , ‘…and hate less…’, oh Good Lord, way too much irony, where to start with you – who spits out anti-Russian hatred virtually on daily basis on this very site?

I thought the cargo almost hit him and pissed him off badly.

I get it! Like fucking wide open pussy. Boys being boys.