The Russian Zvezda TV channel has released a fresh video showing Mi-28N attack helicopters of the Russian Aerospace Forces in action against ISIS in the area of Uqayribat in the eastern Hama countryisde. 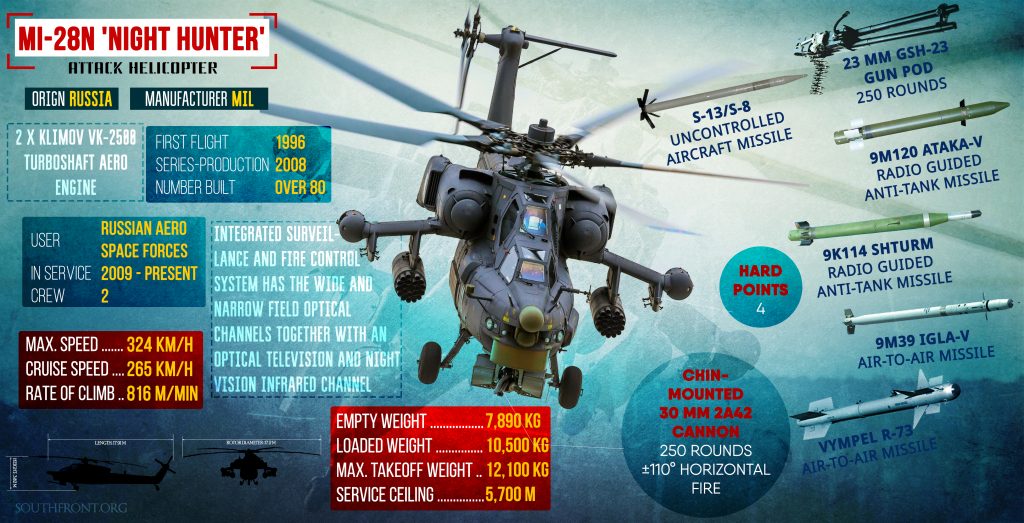 let the terrorists roast in the fire of these helis in preparation of their burning in hell, let their awaited 72 whores be 72 demons burning them each day

Apparently Uqayribat is under SAA control now, and the rest of the pocket will fall soon.

The soon they fall the better!

That ripp and tear their flesh like in “Agony” game

Do you think hell is a moderate place?

It will be when Clinton and Soros get there – it can have all the dancing LGBTs.

I’m sure they will get VIP treatment…

The SAA and their allies have performed in a truly professional and timely manner, especially as the terror gangs in Idlib are getting restless again.

I like the sinister look on the MI-28 Night Hunter. ‘How many rats are going to die today?’

Syria advance need much more support than a single helicopter !!

Don’t you just love Russia and the Russian President Putin. I do more and more. Who could have believed twenty years ago that Russia would be leading the planet in its desire to be free and democratic nation states. To be free peoples. For peace on earth and the end of US created islamic terror – the scourge of the world, their sanctions – economic war – their mass murder, their corruption. One man who did was the famous US pychic Edgar Cayce. ‘Russia will be the hope of the world’. The only thing the US has got right in decades.

Don’t get charmed so easily, this isn’t what Russia is about. Otherwise disappointment (disillusion?) will hit you hard. If you actually respect Russia try to study a bit the mentality behind our behaviour that just happen to look positive for you currently.

Read some Dostoevskiy =) There is a saying that two kinds of true russians exist – supporting either Tolstoy or Dostoevskiy. First type isn’t significantly relevant in current politics, but understanding second would be a great basis.

Thing is, Russia isn’t compatible with the western concept of freedom. Your freedom is ability to choose a path for yourself, our freedom is making the only path there is clearer and happier for everyone. Putin is TOO liberal for Russia, but he is tolerated due to past feats. But even he isn’t a means to your end. We may be a hope for the world, but are you sure it will be the world favouring your concept of freedom?

What does this nonsense have to do with my comment?

Where are the Isis fighter’s gone ??

What are the IS affiliates in North Africa, Afghanistan and other parts of the world saying now? KiraSeer