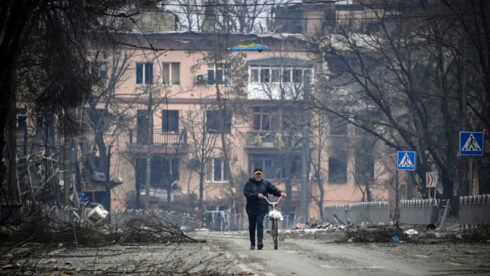 Independent journalist Patrick Lancaster posted a video Monday providing over an hour’s worth of footage showing the horrific conditions the citizens of Mariupol, Ukraine are currently living under.

Lancaster and other press members are seen assisting the suffering people with food, water and medicine as explosions ring out in the background throughout the tragic video.

Some locals detailed horrifying stories of Ukrainian troops murdering innocent civilians while claiming the Russians have left them alone.

Those who wished to leave and become refugees were offered help with fleeing the city.

Perhaps because Mariupol is a DPR city and is seen by Ukraine as a rebellious region, the locals said they have received little to no humanitarian aid.

This is especially true when comparing areas around Kiev, which is flooded with press and activists.

Another Monday report posted by Lancaster captured a burning home said by locals to have been hit by a Ukrainian attack.

“Sure it’s them!” a crying woman said as she watched her house in flames.

A man who was injured in the bombing was asked to provide a message to Ukraine or world leaders, and he said:

“We don’t have anything against regular citizens of Ukraine, and those who are against Russia and support the government of Zelensky. I don’t wish them to go through the same, but they should turn their backs to their government.”

One man described being told by the Ukrainian military to abandon his home and go to a nearby school only for that school to be destroyed by shelling the next night.

When asked if this was a coincidence, the man answered, “I don’t just think, these are facts,” but did note that no troops Ukrainian or Russian have treated him wrong.

A young couple who have been living in their basement with their two-year-old child told Lancaster they haven’t encountered any Ukrainian troops, but that DPR soldiers gave them food and baby supplies.

The people in Mariupol certainly made their disdain for Ukrainian President Volodymyr Zelenskyy known to the camera.

Lancaster also revealed on Monday that a Ukrainian missile strike landed in a Russian town he sent his family to in order to be safe during the war.

The shell hit just down the street from where his wife and kids are staying.

Patrick Lancaster isn’t the only journalist braving the dangerous Ukraine-Russia conflict, as seen in the following report by video journalist Maximilian Clarke.

Similar to the citizens appearing in Lancaster’s videos, dozens of interviews are now surfacing where Ukrainians describe what they’ve seen during the deadly conflict.

The apartment was said to have been set on fire by the Ukrainian military, who she said: “are not humans.”

A Mariupol resident described people being shelled by Ukrainian equipment when there was no Russian military in sight.

Asked if the Ukraine military hates the people of Mariupol, a weeping woman said, “Yes, of course! They said if we retreat, ‘we will wipe the city off.’”

An American woman who spent the last month in Mariupol claimed her friend witnessed Ukrainian troops shooting at the house he was in.

A man who was supposedly acting as a medic in the 93rd Ukrainian Brigade described leaving around 20 to 30 wounded soldiers behind.

An allegedly captured Russian soldier was filmed admitting to shooting a woman who wouldn’t “go to another room” and killing two men who couldn’t pronounce a word correctly.

For a glimpse into the mindset of a made person who may support these war crimes, take a look a the following 2014 interview with Ukrainian journalist Bogdan Boutkevitch advocating for 1.5 million people in the Donbas region to be exterminated.

He said the area is “overpopulated with people nobody has any use for.”

This is how the neo-Nazi nationalists in Ukraine see the people of the DPR and LPR.

The Banderpite Jack o’ Diamonds is a hard card for the US to play. The anti-Russian death-cult is very appealing, but it’s a hard-sell in Wokeistan when your freedom-fighters are so keen on murdering people on the basis of perceived ethnic differences.

It doesn’t matter, people here in the US are dumber than a door knob. Where I live is filled with woke idiots. Two years ago everyone was flying the BLM flag and had signs in their window to Resist, today every one of those same houses now has a Ukrainian flag. Educated people fighting Trump and White Nationalism now supporting Biden and Banderpite White Nationalism. Clown World, we are living in frigg’n’ Clown World!

Ukrop bots will come out and claim firsthand testimonies don’t count as evidence unless CNN says it does lmao.

Putin is the leader of that cult

I think Putin is in on the Great Reset. Ukraine is being destroyed, so they can build back better. It is also a distraction from the global destruction of economies through the plandemic. Note that Putin C19 response (mandatory experimental plus quarantine camps) is same as West. Why is it that world leaders have coordinated actions to be same? Are they all in on it, members of the World Economic Forum? Yes, yes they are. AstraZeneca and Pfizer still working with Russia to produce clot shots, even in the face of sanctions? Yes, yes they are…. Hmmmm, what might this indicate?

The UKIES used mobile crematoriums in 2015.

Do they buy russian gas for that ?

No they eat them or make the russian soldiers do it. This is first class pig they say.

The Russian child rapist sleep with dead children. But he was armed, they say.

When I’ll have kids, I’ll thell them stories with The Little Green who comes at night to steal their toys

Well, we have dayly photos, videos, sober journalists, Red Cross and NGOs. Who want Russian propanda unless we want to die laughing and crying. Those propagandist of Putin seemes not even to be people or human beings.

According to the socalled article above there must be 100s of pathetic liars in Maripol and around it.

We are sure some of those nazis has done terrible things but what the Russians do and has is mch worse and in 1000s as well as decounstructing this town too.

The starvation thing is there too. Its complitly ignored that many days ago at least 300.000 of 400.000 was evacuated to good conditions. It also ignored the Russians themself has evacuated at least 30.000.

Where are all those in this article???

I also wonder why the Ukras should shell their own houses. That can give up to 15 years of jail in Russia. You cant even see it on Facebook.

Quaking into your boots nazi troll? Get the facts, your nazi cockroaches are being exterminated. Nice videos with chechens launching grenades into the manholes where the nazis are hiding and then shouting Allahu Akhbar. Very very funny! HAHAHAHAHAHA

roasted azovisis are so yummy :P

I don’t know what a poor live this Nazi-troll has. Just ignoring the fact that this was the very reason for Russia to step in, for 8 years the Ucrap Nazis are bombing their own civilians. It started with the massacre of Odessa, May 2, 2014, followed by a referendum of independence and the second massacre of Lugansk, June 2, 2014.

If you go to google maps and see satellite images of Donetsk, Gorlovka and surroundings you see the destruction.

Why did this diluted Nazi-Crap Holm not visit Donbass earliert to verify if Ucrap is shelling its own people? He is just an Idiot-Troll, one should not feed him.

If you look back before the war in Patrick Lancasters videos, you see the shelling documented, well before the Russian Invasion.

Listen dear, the Ukrainians have been waging war on the people of Donbass areas for the past eight years, ever since the coup in 2014. Recently they increased their attacks and were massing around this region. They are NAZIs, without morals. Well, with the morals of satan and the demons. Russia came into Ukraine to protect and free these poor people from the attacks on them. They were also concerned that Ukraine was joining NATO and would get NUCLEAR weapons. Since the coup in 2014, only politicians hostile to Russia have come into power or even been allowed to stand in elections. There are over 30 US biolabs in Ukraine which have made surrounding people sick with their unleashing of these experiments on the locals. The USUK French have been in Ukraine training the military here on how to kill people, THEIR people. Those in the breakaway regions do not want to be part of Ukraine after they have been mass murdered over the past eight years. 15,000 civilians died BEFORE Russia came in. Facts, the TRUTH makes Russia into the good guys.

Another crappy production video by Putingrad Studios? They’re so phony they’re almost comical. Especially given the fact that the Russians already controlled most of Mariupol since the start of the war. The Putin cockroaches are simply filming the carnage and destruction they themselves created.

Caaa
Reply to  Muhammad your Prophet

Russia Parade in Kiev
Reply to  Muhammad your Prophet

They are playing their roles like they are paid in rubles

You might have a wall to line up whats going on.

Your army even does not want to receive the stocked Russian bodies, how can you know. Can you even count? This are 6 in Mariupol on one corner hiding Sorry seven https://t.me/c/1486981915/16737

Typical Ukrop gibberish. It’s the other way around. Ukrops don’t want take their dead soldiers and don’t even give them injured medical treatment. Stop lying you filthy trolling scum.

Thanks to all the independent journalists who risk their lives to show what is really going on. Please be careful and not let Nazi Scum kill you.

“…they are not humans” – right, specially after ingesting ssri-type military-issue pharmaceuticals that rob a person of all empathy for their fellow human beings

The most funny thing I have read all week. This is a clever anti-Russian troll.

‘An allegedly captured Russian soldier was filmed admitting to shooting a woman..’??????