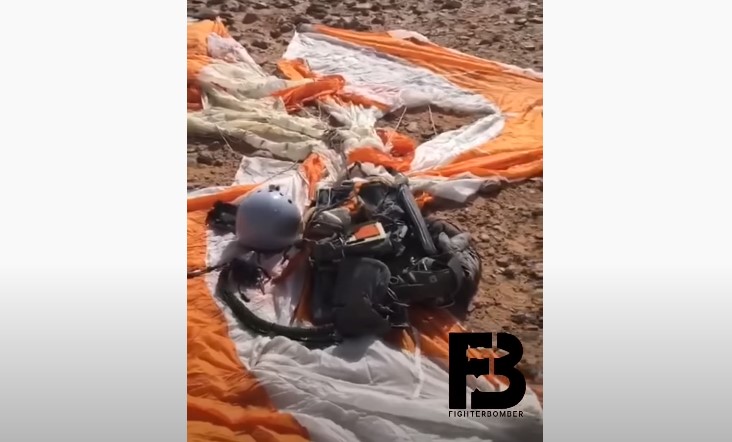 UPDATE (9.09.2020): The military blog that released the video about the Russian-speaking ‘pilot’ after the supposed crash of his aircraft updated the video title saying that it was a kind of training (as SF wrote in the article below).

Meanwhile, Russia’s news website Sovetov.su wrote in its article that the author of the video allegedly contacted its editorial staff. According to this report, the video was filmed in Syria during an evacuation training.

Pro-Turkish sources are celebrating another Twitter victory. Now, they claim that their forces had shot down a fighter jet with a Russian pilot in Libya.

The story started on September 7 when a Russian pro-government military blog ‘Fighter Bomber’ (mostly known for military-related trolling and jokes) released a video recorded by a Russian-speaking person (supposedly pilot). He claims that his aircraft was shot down and he was waiting for an evacuation helicopter in some desert area. The blog provided no details regarding where and when the video was filmed.

The person on the video says the following:

laid parachute and waiting for rescuers…

so, 10 candies… But it’s good that a crash-position indicator works… A radio set works…

What done is done…

This is the valley. The airfield is in this direction, about 45km. Rocks are everywhere. I slammed at rocks.

I ejected on the height of about 700m.

That’s all, they found me! Thank you guys!

A Mi-8 will come and take me. These cannot land here.

Expectedly, such a video sparked a fire in social media with multiple sources claiming that it was allegedly filmed in Libya. This was neither denied or confirmed by the blog directly. However, its editors claimed that all versions are ‘wrong’.

As to the video itself and actions of the alleged pilot on it, the situation looks pretty strange. First of all, if the jet was really shot down in combat conditions and the pilot ejected, the decision to film a video that may fall into the hands of the potential enemy is quite puzzling. The behavior of the pilot that makes such a decision raises the questions about the real purpose of the move. In real conditions, the pilot would likely try to retreat from the crash site as much as possible taking the crash-position indicator to allow the rescue force to find him. Another factor is that despite the claims of the ‘pilot’, no smoke can be really seen in the video. On top of this, the pilot does not wear a flight suit. This also looks strange.

According to Russian sources, the video may have been recorded during some evacuation training. This could explain the strange behavior of the ‘pilot’ and the entire situation. The ‘pilot’ felt no real danger to his life and had enough time to record a ‘fun video’ that was later used to gain views by the military blog. If this is true, this will be a visual demonstration of how the neglection to operational security (even during some drills) may lead to the ‘unexpected’ informational impact.

In any case, Turkish sources and fan boys of the Turkish-backed Government of National Accord (based in Libya’s Tripoli) have been celebrating another Twitter victory today.

How can we beleive one single Turkish “Word”, this people are typically unfaithful and remarkably perfid. As their Jewish cousins…Just liars and thugs in majority.

So where is the jet?

No smoke from the wreckage? The pilot did a 360 degree sweep during his video. Wouldn’t there be something even from a far off distance?

He said there’s smoke, but the video does not show any smoke. I think the article is right and this is a training exercise.

what about enemy on SUVs?

Please point these SUVs out in the video.

Do we see SUVs in the video? The simple answer is no. I didn’t ask what the person in the video was saying.

you are welcome to believe whatever you want to believe mate. best of luck

HTS even celebrates after shooting down turkish drones or even balloons..

if everybody in turkey with a brain of an 7 year old kid?…that will explain why still erdogan is in power i guess

Pro-Turkish sources are celebrating another Twitter victorynoone is celebrating anything..ı will break my teeth if sf oneday performs objective journalism.

If true thats another proof Russian election seats are the best. But after that Indian Su-35 story Im a bit careful. But if true Im glad the pilot is ok.

Oh , have you tried one of those … how’s you butt doing ?

I did, Alex but not in your style. I’m a straight guy.

My style ?? You are the one bringing up erection here so it’s clearly what the chair is reminding you of but you shouldn’t feel ashamed, it’s completely normal nowdays.

I don’t feel ashamed, we men bring our dicks in discution, from time to time, a sassy lady like you tries to look offended but your lust to continue the jubject is more than obvious.

No lust not offended either just don’t care, but it is quite interesting sometimes to observe people that have compulsive behaviour, so the ejection seat reminds you of erection that you are so proud of and like to show to other men, makes you feel more manly or maybe you like to seam more manly so that nobody even dares to think that you are gay, most gay men do that. Seen it many times.

Ahh I see. I was speaking with someonelse, we know each other for months. From time to time there are idiots like you that jump into discution without knowing what is it about. When two people are talking keep your nose out of their butts.

There you go again, nose in the butt ), you just like to throw those gay phrases, says a lot about you, you guys have been sniffing each other for months, i get it,Imho.

Btw ukkie, this is a public conversation anyone has the right to respond, don’t like it then keep it private ))) you butt sniffer.

Other than sucking cock do you have anything interesting to say?

I guess you have tested this anti-corona method on yourself, your family and friends then, great for you !!! I on other hand rather get corona.

True, but they spread false rumors that Taiwan shot down a Chinese Su-35.

Understood. Haven’t read anything about that.

a pseudo event….boris and Natasha is better

But he says something about enemy on SUVs, so its not training. and the painting on the mi24 indicates its Libya. He might be from PMC, wouldnt be suprised if they hire pilots too. Plausable deniability guaranteed. Rank changed from Colonel to Sous Chef:))))

Surely a evacuation exercise during past army games and tank Biatlon…

Army games 2020 beside Russia took place in many other countries..like Azerbajan, Uzbekistan, Kazajistan, Kirguistan, Tajikistan..many of them have desert ( not sand desert like in Arab countries)

Air force games were in Ryazan

NO!.beside Russia another competitio took part in others countries..

Do you have an attention span of a fish? or do you think the pilot ejected from a ship or a tank?:)))) Ryazan Russia – Air Force games Baku Azerbaijan – Navy Games Uzbekistan – Military Police Games Armenia – Military literature/history or something Kyzyl, Russia – Equestrian These last 4 is the most south these games were held. Here is the link: http://armygames2020.mil.ru/main_en/ Try to find if you can: how to eject from a navy ship or horse, with a parachute:))))))

Man dont be fool..thats an exercise!..no oficial sources have claimed nothing about it…i am subcritor of that channel and use to post videos of extreme military exercise and drills…

Since you are so sure, please, my all means, provide your suspected locations of that “exercise”?:))))

Ask to your Libyan partners GNA or Turkish if they have shot down any jet there!..I dont see any official sources claimed it.

thats not what i asked. I claimed that it was shot in Libya, provided a photo of Libyan landscape that matches the video. You claim that it is an exercise, so go ahead and provide something, anything that would show similar landscape where RusAF could have an exercise.

Five minutes of searching and this: the author of the original article explains it. I don’t speak/read Russian:

Voyenlet Fighterbomber revealed the secret of the frames of the evacuation of the “downed” Russian pilot (VIDEO) 09.09.2020 – 11:55

Voyenlet Fighterbomber Revealed the Secret of Evacuation Shots of the Downed Russian Pilot (VIDEO) | Russian spring A Russian military pilot who maintains social media accounts for the Fighterbomber (Chronicle of a retired fighter-bomber) confirmed speculation that the video released yesterday of the evacuation of the Russian pilot was a training event.

The Libyan sides just reached an agreement on ending the conflict and holding nationwide elections in march 2021. Russia will lose should elections take place because Haftar has no chance in hell of winning the election. If we don’t win on the battlefield, we’ll win at the ballot. Let’s hope Haftar doesn’t start a fight to prevent the elections like he did twice before. Majority of Libyans want a Muslim democracy like what we see in Turkey. This is a new model that Islam’s enemies don’t want other nations emulating. The era of dictators in the Muslim world is fast coming to an end.