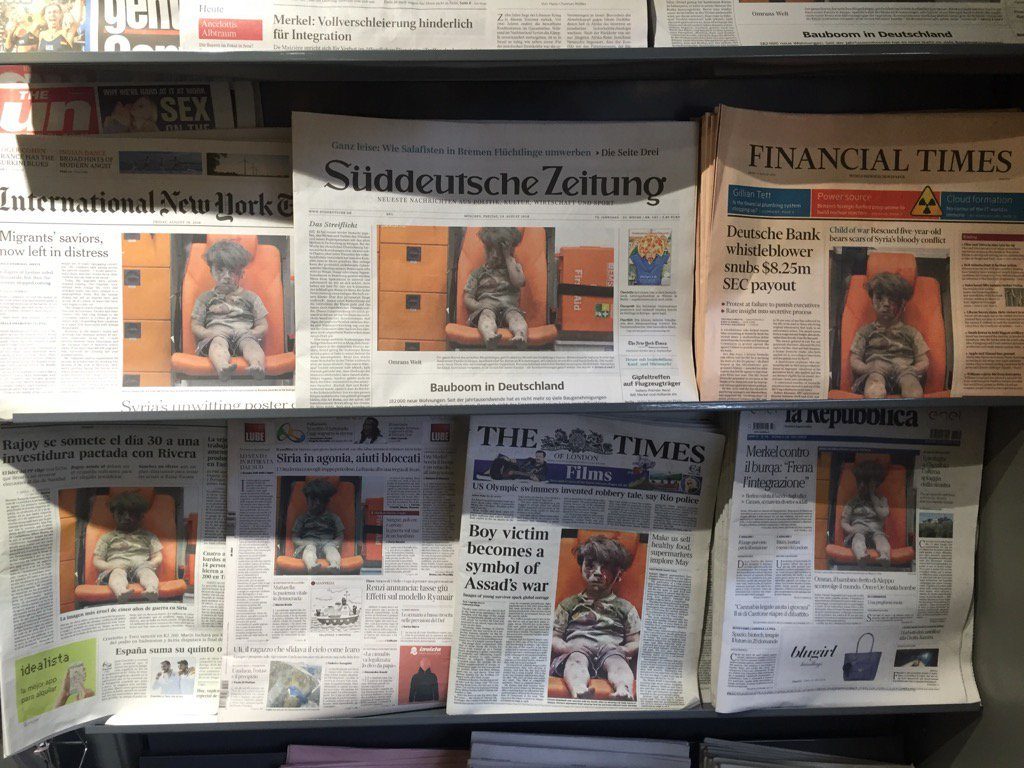 The dad of the the boy whose photo was used by the mainstream media in a propaganda war against the Syrian-Iranian-Russian alliance tells the truth about the incident.

Omran, the boy whose photo was used by “rebels” to demonize the Assad govt w/ his family. Turns out the family are pro govt.Via @Xerxes92005 pic.twitter.com/A7U4uuDnjT

Omran’s dad tells how “rebels” traded w/blood of his son & how he was offered money 2 do interviews & attack the govt #Syria via @j_alashkar pic.twitter.com/OiDzyUTFG4

Hahaha gotta show this to my dad so maybe he believes. He is soviet era ‘usa cant do any wrong and the eastern bloc are all communist killers’

Haha lol dude he watches the ”news” XD. Its all good tho, love me dad, at least we agree on local politics!

whole convoys of TANKS, TRUCKS, PLANES, WEAPONS, GEAR, AMMO etc to help stalin and his jewish NKVD in murdering and slaving eastern and western europe + their own citizens. educate yourself

MSM relies on sheeple to not investigate claims being made. Anyone with a brain cell would have been able to find the videos of “moderates” having Omran pose for that photoshoot. I fully expect the MSM fake news to say that his dad was now pressured by the Syrian gov’t into telling his side.

Truth served cold is a wonderful dish. It lasts for eternity as well.

This Film is Pure Gold, nice to have seen this before all of this BS that is going on in the MSM, i know exactly that they are Lieing to us like we are ALL stupid.

Do you mean that the MSM is nothing but a lot of bullshit purveyors ? Please don’t tell the American people. The realization that they are so incredibly gullible and stupid, might send them into a frenzy of sanity. Naaah, impossible., just wishful thinking on my part.

MSM media will either ignore this revelation as the original impact was done and served its purpose OR they will say this man and his boy were forced by the Assad regime to say otherwise.

You nailed it. MSM are mostly staffed by hacks and shills who just do what they are told.

Good to see Omran doing well. And where is the news video about civilians being killed and injured by coalition airstrikes against Mosul and Raqqah ? I guess this would not be politically correct for MSM hypocrites.

It doesn’t matter. As long as Zion can mass control the 90%, mind control academia and write the history text books, everything is fine.

Ha, ha, ha. Fake News media gets bit by their own lies. I remember this in the Globe & Worthless Mail and being pushed as an anti-Assad line on the CBC. What a pack of manipulating liars. Stuff like this really marks out the mainstream media. One doesn’t forget this garbage.

What is fake though? He was injured by a Russian air strike over rebel held territories. What does it matter if his family supports the gov? MILLIONS of people in North Korea support Jim Jung Um. Does that mean that NK is good?

Concerned student – that’s the thing though, there wasn’t any air strike especially not from Russia. Once Aleppo was freed from these terrorists the family sought shelter with pro-Assad army controlled area.

1. What’s your proof that there was any air strike? The family denies any.

2. Who are you to decide whether North Korea is good or not?

CHILDREN have ‘always’ been used to gain approval for ILLEGAL WARS. Remember those poor babies in the icubators LIE?