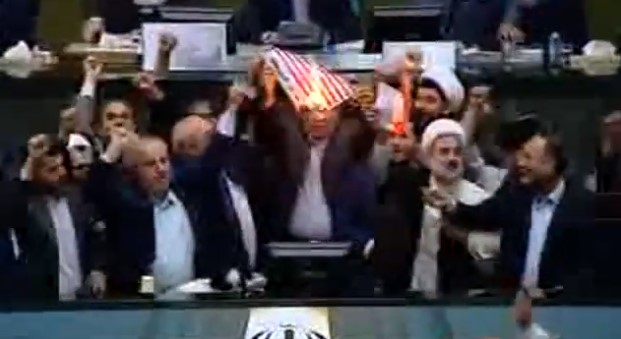 Following US President Donald Trump’s May 8 announcement to pull out from the Iran nuclear deal, Iranian lawmakers have burned a US flag shouting “Death to America” in the country’s Parliament.

“Last night you heard that the US president made silly and superficial remarks. There were maybe more than 10 lies in his comments. He threatened both the establishment and the nation, saying he will do this and that,” he said during a meeting with teachers and university professors in Tehran on May 9. “Mr. Trump I tell you on behalf of the Iranian nation: You are making a damn mistake.”

“We accepted the JCPOA, but enmities with the Islamic Republic did not end. Now they raise the issue of our presence in the region and the issue of missiles. If we accept them too, they will bring up another issue,” Ayatollah Khamenei said. “The reason for US opposition to the establishment is that the US used to completely dominate [Iran] but the [Islamic] Revolution cut off their hands [from the country].”

Did they actually say that? I hear it’s a mistranslation of “down with america”

I second that. Please check this SF, as it is a central piece of western and Israeli propaganda against Iran.. No need to have their BS on SF too..

At least in part it is hard not to conclude that the Iranians have been taken for fools. The JCPOA required some basically irreversible actions like destroying the core of their heavy water reactor. May be they will be left with the shell of an agreement but I don’t doubt that over time the Americans will whip the Europeans into line.

I know some will not see it this way to to me what has happened show that Trump has control of the agenda and other must scramble to respond.

Trump doesn’t have control of the agenda. There are powerful forces that control the agenda(s), but Trump has been duped into submitting to their will, their plans. He thinks the parasite that is eating away his nation, from the FED to AIPAC are his friends, allies and fellow countrymen, but they are not, but are destroying the nation from within. America is a dispensable tool for these creatures, and Trump will only stay in office as long as he submits and does what they want him to do . .

Putin is a feeble senile leader.. he cannot even protect its own allies ..hahaha

I 100% agree. What I do not understand is how Russians do not see… Russia is super friendly to Israel… While Israel is super hostile to Russians lol. It is a one-way friendship for sure. One uses the other, while the other serves the abusive spouse.

Iran, is hot headed and the Russians See this very clearly. Iran is abusing its position as a strategic ally of Russia. The Iranians are making the Russians look bad in front of the people of the world, they are Making themselves look bad, 400 million Americans, 230 million Russians 2 billion Chinese and 1.2 billion Indians and none of them act the way Iran is acting. The Iranians make me feel a little bit angry when I think about those Missiles they launched at Israel, Burning American Flags Supporting the Muslim brotherhood in Europe.

The Russians should consider dropping them. Im 99% certain, Trump will do to them, exactly what they helped hapten to Europe. Unload all of those Africans they helped bring into Europe right into Iran. I would love to see How they feel.

The fact that Iran supports the Muslim brotherhood, anger and no organization in their heads. makes me think that they may possibly find themselves in a position to stab Russia in the back, the Muslims in the Middle east will know no peace with mindless angry Neighbors like that.

Your facts are way off base;

the Muslim Brotherhood is a radical Sunni political organization that started in Egypt. They differ from the Wahhabi of Saudi Arabia in that they try to achieve power using deceit, rather than forced conversion. Iran is Shia not Sunni. The missiles launched at the Golan Heights were launched by the Syrian Army in retaliation for Israeli missiles launched at Syrian army positions.

Burning a paper American flag by some frustrated members of parliament, however I do agree is childish, but hardly any where close to an act of war.