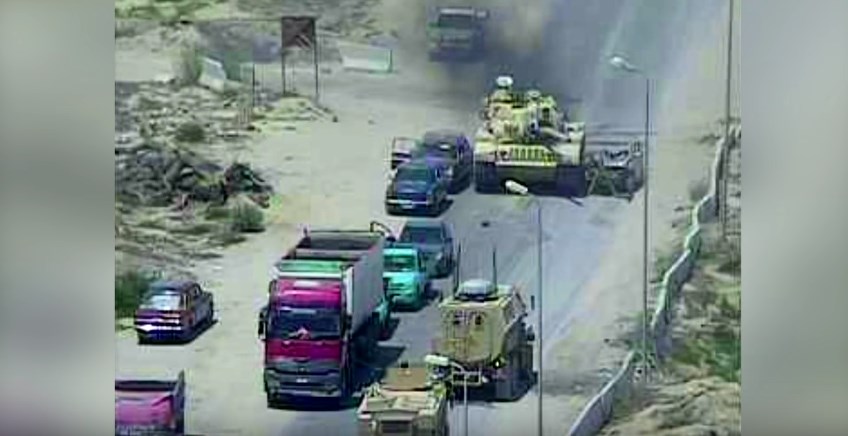 A Egyptian M60 battle tank has crushed a vehicle-borne improvised explosive device (VBIED) that was attempting to reach a Egyptian army check point and to detonate it.

Meanwhile, 8 members of Hasm Movement, an Islamist militant group, have been killed in the city of Fayoum in central Egypt. The group is active in central Egypt, including the capital of Cairo.

Wow top job that tank crew – looks like the bomb took out someone aproaching from the bush on the right but yeah gutzy as and sure stopped it getting any closer.

I’m pretty sure you can see that dude’s body fly into the air and then drop to the ground. Strangely, he seems to go straight up and down. Looks like there’s another dude who stays with his blue car on the left. Everyone else ran but he opens his door and hangs around for the fireworks…

That my friends shows what experience and training does. I thought the tank would have had an easier time of turning around. Pretty impressive no matter how you look at it.

It looks like VBIED had some detonation issue. Nonetheless, very impressive and quick thinking by tank crew. Although I think it was dumb luck. Had that thing detonated, that tank would be toast.

All the tank crew deserve medals for valour.

nerves of steel there by the tank crew. they exposed themselves to great risk. if the vbieb detonated when the tank was on top of it , maybe they would be dead now. The tanks have great armour in front and around them but underneath they are very vulnerable. if they just stood and waited they would have sustained the explosion with at most minor injuries and scratches, whereas dozens civilians would have died. They deserve metals for sure.

The poor technical level of the suicide candidates must be a real problem for ISIS nowadays… :)