Typhon in Greek mythology is a frightening creature of great power with a hundred snake heads on his shoulders. Out of his eye is spitting fire, and he roars like a roaring lion or barking dogs. The father of famous monsters such as the dogs Orthrus and three-headed Cerberus, Lernaean hydra and Chimera. 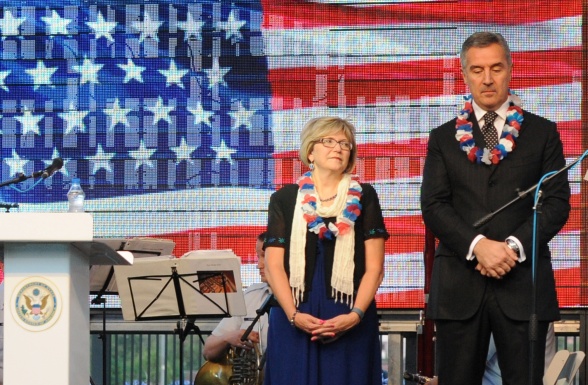 For those who have lately followed the neurotic performances of Milo Djukanovic, there is no doubt Typhon is the proto version of  Vojislav Kostunica. More precisely, the former leader of the DSS is an improved reincarnation of mythological monsters, previously crossed with the Phoenix. Talented fantasy writers surely will not miss the challenge of the final calculation of the Beast from Rastok and Typhon from Kostunica.

Whoever thought for a moment that Djukanovic’s statement about Kostunica is an expression of complete mental derangement, was left speechless when his subsequent “unveiling”. Specifically, during a TV show the multiple premier foresaw,  that Russian camouflaged tanks, colorful tents and opposition gurgled ominously on the Boulevard Saint Peter of Cetinje.

The old military-political principle says that a Russian tank that makes a scene in the first act, must trample over something in at the last. In Milo Djukanovic obsessive scenario, Russian tanks would, backed by local infantry, after clashes with self-igniting armoured combat vehicle’s of the Montenegrin police, easily overrun the strategic corner Gorica C.

Comrade NATO, we swear to you

That would put an end to three decades tragedy, because Moscow (repentant) trusts no tears. Shortly after the aforementioned TV shows, Russian MID’s paternally and emotionally expressed the hope  Milo Djukanovic to start using common sense. However, it seems that Djukanovic, meanwhile, publicly buried battered paradigm conspiracy Vatican-Washington-Soros, and replaced by an asymmetrical triangle Belgrade-Moscow-Kostunica. He explained, she’d youth.

Currently, Milo is a very serious problem is that its visual and incompressible shattering dissects the  diplomatic cables of the US Embassy. The Americans understand that higher energy protest actually answer the referendum divide for and against Milo Djukanovic, and that the party “against” the serious advantages.

Until yesterday it was a utopia, but today a collection of Djukanovic’s opponents seems pretty compact and decisively. United were tent, nightstick, mace, and by God, and what a pig. Sorry, The Pig. Initiation unification was made when thousands of protesters engulfed hours regime propaganda composed of libertine pictures with lazily a spinning Pig. While the pig spinning in the dark regime’s media, she turned to a political game. The 24th of October, people, full of cholesterol, burped in the face of the mafia horde and from the starting shot Vojislav Typhon Kostunica roared “Milo, supporter of NATO”.

In the squeaky, rusty, propaganda, The Pig was to dispel the scene of protests “misguided” Montenegrins, Bosnians and Serbs (again) left by themselves, even tho they have been beaten and depressed  by the tragic deserters, yet another treason. However! Apart from wrecking the regime media censorship, Pig dispelled Serbian censorship. Thank Bar’s Serbs!

Simply, there comes a moment when the bowels of the earth break out a new course of history. And no one can stop it. It is obvious that the Americans will get rid of Djukanovic. They have been working to fill, shaping and reinforcing new sets of power in the Montenegrin Team B led by Krivokapic. In the politically incorrect terms you will find: Team B coalition – Washington poodle, which consists of several political parties, some NGOs and mythological beings self-described as “independent intellectuals”.

The role of the opposition team B

With the wholehearted support of Washington, Team B has to take Djukanovic’s informal power. This is the most difficult, but a necessary requirement in order to vote in the bureaucratic core DPS to become the new political leader. This clerical population with related parties weighs about 20 percent of the electorate. Thus, with an election campaign, the voices of ethnic minorities, the effects of D’Hondt, Team B will came to the border absolutes majority.

Who makes the bureaucratic clerical core DPS? You know, it’s the people in Montenegro who adopt “ideology”, via tagging, SMS, pseudo”face to face” talk  … At the end of each new ideological “update” reflexively raise their eyebrows and eyes bulging to convince the environment that nothing really changed. The only real problem they just dropped it, “sleeve” rolled in fresh memories and cold contempt.

Team B has the key task – that after the change of government retain key achievements of the regime of Milo Djukanovic. First and foremost, Montenegro must continue state life as an American protectorate. In this regard, they must remain intact institutional mechanisms of repression and apartheid against the Serbian people, Serbian linguistic community and the Serbian Orthodox Church, as a firm guarantee that Russia here can not anchor.

While for Krivokapic this is a completely natural state, the rest of Team B, the occasional “provocations” on discrimination of citizens, and if you feel any discomfort, has a ready mantra that is terribly spoiled: We will not divide, but fill up refrigerators. Of course, the purpose of the refrigerator in this villainy is to interfere in front of the call for equality, in a situation when all the “division” of the concrete at the expense of a nation. The desired societal pattern of Team B is one in which the Pilipenda was expelled from the required reading list and moral value system, thereby the fridge naturally arises as a centre for “spiritual” life. Practically, this means that all the important processes in the life of society controlled by traders patties.

The only “little problem” for the full implementation of the EU Fuck Victoria Nuland’s secret plan in Montenegro is almost elusive political tact DF-which now conducts wonderfully successful combination of gambling and aikido politics. With a little luck and a fresher breeze geopolitical, perhaps one tear gas on October 24, is a romantic symbol of the (impossible) winning the people’s willing to planetary technocratic abyss.

The writer is President of the Executive Board of Matica Serbia in Montenegro and professor at the Faculty of Science.