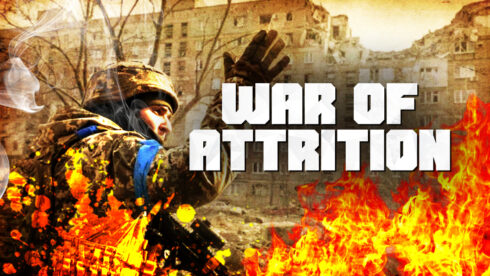 As the bloody conflict in Ukraine continues, the rhetoric from the imperial spear-holders in Washington and some allies is becoming increasingly fixated with one object: victory against Russia.  Such words should be used sparingly, especially given their binding, and blinding tendencies.  When the term “unconditional surrender” was first used by US President Franklin D. Roosevelt at the January 1943 Casablanca conference in the context of defeating Nazi Germany, not all cheered.  It meant a fight to the finish, climbing the summit and dictating terms from a blood-soaked peak.

With such language crowning the efforts of the Allies, the Axis powers – certainly Germany and Japan – could continue fighting the war of extermination, aware that no terms they could submit would be taken seriously.  There would be no compromise in this existential confrontation.  It made the Allied advance in Western Europe slower and enabled the Soviet Union to expel German forces and duly occupy most of Eastern Europe.  It made negotiations about whether Japan would retain its emperor on surrendering nigh impossible, leaving the route open for the use of atomic weapons against Hiroshima and Nagasaki.

The supply of weapons to Ukraine in its efforts against Russia has become a zealous mission that will supposedly achieve victory. Messianic impulses tingle and move through the Washington and London establishment, with some echo in Warsaw and the capitals of the Baltic states.  An air of unreality – be it in terms of negotiating the future of Ukrainian territory under Russian occupation – fills such corridors of power.

On May 1, after travelling to Kyiv, House Speaker Nancy Pelosi raised the colours.  “America,” she declared with earnestness, “stands with Ukraine until victory is won.”  She made little effort to expound on what this would entail, be it the expulsion of Russian forces from all Ukrainian territory, including Crimea, or the “meat grinder” solution, leaving Kyiv and Moscow to bleed, weakening the latter and strengthening NATO security over a dead generation.

Her remarks did enough to worry Michael T. Klare, defence correspondent for The Nation.  “Nowhere, in her comments or those of other high-ranking officials, is there any talk of a negotiated settlement in Ukraine, only of scenarios leading to Russia’s defeat, at whatever cost in human lives.”

The vagueness of the term has led to grand, sanguinary calls to battle unenlightened Russian barbarism, with the UK and US governments repeatedly calling this a conflict that involves the whole west, even the world.  Peering more closely at the rhetoric, and another sentiment comes to the fore: the desire to bloody Russia vicariously while arms manufacturers take stock.

For over a decade, Ukraine has been something of a plaything in branches of the US State Department, and US Deputy Secretary of State Wendy R. Sherman can be found telling the BBC’s Newshour that Russia had to “suffer a strategic failure” in Ukraine.

The checklist for doing so, as outlined by US President Joe Biden, is lengthy.  “We will continue providing Ukraine with advanced weaponry, including Javelin anti-tank missiles, Stinger antiaircraft missiles, powerful artillery and precision rocket systems, radars, unmanned aerial vehicles, Mi-17 helicopters and ammunition.”

On this score, the hawks are in the ascendancy.  Anyone uttering the view that a Ukrainian victory would hardly be total, let alone likely, have been reviled, as British military historian and journalist Max Hastings writes.  They are tarred and feathered as either “ultra-realists” or appeasers.

Hard-headed peace talks, let alone anything approximating to negotiations have, as a result, also become taboo.  The early June suggestion by French President Emmanuel Macron that, “We must not humiliate Russia, so that the day the fighting stops, we can build a way out through diplomatic channels” was met with disdain and fury in Kyiv.

The previous month, the world’s oldest Machiavellian devotee, former US Secretary of State Henry Kissinger, dared mention the need for the warring parties to commence talks.  Unconvicted war criminal he may be, his view that “negotiations need to begin in the next two months before it creates upheavals and tensions that will not be easily overcome” was hardly controversial.  But the Ukrainian president Volodymyr Zelenskyy responded by foraging in the dustbin of history.  “It seems that Mr Kissinger’s calendar is not 2022, but 1938.”

In Kyiv, the very idea of making a deal with Moscow is being met with revulsion.  “They have killed too many people,” opines Oleksii Movchan of the Ukrainian Parliament representing Zelenskyy’s Servant of the People Party. “They have destroyed too many cities.  They have raped too many women.  If the war stops now and the world tries to accommodate Putin, then international law will have no meaning.”

For the moment, support from the US is taking the form of logistical and material assistance in what has already been called by Russian Foreign Minister Sergey Lavrov a proxy war against Moscow.  With each ghoulish weapons update, we can read about the types of murderous devices used, and how effective they were.  The latest featured an attack on Nova Kakhovka in the Kherson region by Ukrainian forces using US-supplied Himars missiles.  Kyiv’s line: the attack was a success, destroying a Russian ammunition depot, killing dozens of Russian military personnel.  The Russian angle: homes and warehouses storing fertiliser had been pulverised, killing five and wounding 80.

Ukrainians have become surrogate democrats and freedom fighters (these terms are not necessarily identical) and Washington is willing to ensure, at least for the moment, that they have the weapons.  Other countries in Europe are willing to keep the borders open to Ukraine’s refugees.  But how long will this last?  Hearts can, in time, harden, leaving way for national self-interest to take hold.  At some point, the weapons will have to be put down, the war making way for the jaw.  Till then, the unofficial policy of fighting to the last Ukrainian will be in vogue.

Poland Is Gradually Getting Tired Of Ukrainian Problems

In war sacrifices must be made, Ukraine’s job right now is to hold out and bleed russia until the USA-NATO prepare sufficiently to come in and kick their azzes back to their own shithole country…heheheh

So, what you are saying is, the Ukranians exist only to due and fight. Americans exist only to profit on their blood. With that sort of worldview it is hardly surprising that 80% of the global population, the entire ‘Global South’, almost all of Asia, Africa & the Indian Subcontinent, plus a majority of Latin America, has rejected US/NATO, and Russia finds itself with more friends, a stronger economy, and a military victory. It must be so hard to understand why so many nations prefer peace, trade, progress and respect over carpet bombing, poverty, starvation and American rule. What’s it like being on the wrong side of history?

The rambling of a PutinGayFanboi…heheheh

The rambling of USLadyboy lol.

The nonsense of a Nato-fanboy hehe!

Looks like the ONLY russian friends are syria and north Korea 🤣🤣😂😂

Even the Stans are giving Russia the booth. Good for them 😉

So go sacrifice yourself instead of barking from your toilet. Fucking cunt. You can’t hide forever, some freak like Robert Crimo III will rape and kill you there anyway.

In Ukraine, women engineers, chemists and biologists are required to register for military service from October 1

they are already conscripting women

Comedians and clowns (male or female) are exempt from the registering for the army.

I don’t think they’ll use them at the frontline but at their respective fields. Military has its own engineers, chemists, doctors, pharmacists and so on, but either they’re short now because of losses, or they are really going to create a very large army therefore they need more specialists too. This means whatever peace treaty Kiev is going to sign, they’re going to violate it later on.

Ukraine,s zelensky is considering replacing Catherine the Great statue in Odessa with a monument of——- American Pornographic homosexual actor Billy Herrington – I am starting to believe the posters who say zelensky is a homosexual.

Zelenclownsky is pansexual like Joe and Hunter Biden: when he’s high he is fucking with men, women, children, goats, even dumb animals like jens holm and hans raus. he probably even raped that statue.

US Deputy Secretary of State Wendy R. Sherman can be found telling the BBC’s Newshour that Russia had to “suffer a strategic failure” in Ukraine.

That’s Wendy “”We know that deception is part of the (Iranian) DNA” Sherman.

No retreat no surrender!!!

Ukrainian soldiers are retreating and surrendering each and every day. Where have you been in the last weeks? Under a rock?!

With idiots like these leading the quest for Unconditional Surrender from Russia puts the world into the fast lane of Thermonuclear War, forget WW3 none of us will be around to remember it. My one wish is these bastards get a good dose of alpha or beta radiation and die a lingering death with cancer riddling their bodies. Gamma radiation would be to quick for them.

Russia needs to take the moral high ground and for the protection of it’s citizens in the U.$. by leaving the UN Ca$in0 and announcing the war crimes of it’s h0$t that orders everyone else to follow the specification(s) and guidelines of it’s charter except for itself with the exception of it’s NATO cabal!…

Then… It needs to announce that it will be opening it’s commodities market(s) that will incorporate strict rules for “futures” that will determine “every single paper contract” to “every single ounce” of PHYZICAL precious metal(s)!…

Russia does that. And I’ll be buying my physical metal in Roubles any chance I get!

You know that this is impossible (your physical commodities market) unless you want to trade in medieval style with carts full of coal exchanged on the town market for gold coins… btw speaking about moral high grounds, so far only North Korea recognised the ‘ Peoples Republics’… this should tell you something, shouldn’t it?

Forgot Syria bro… Soon to be Iran just before China.

Completely WRONG! Let the market(s) set the price for commodities and not the banks and you have what is from 100 years ago called “equity”!…

You must be a $Bitcoin holder and believe in the Satoshi theory of money!?… Which by the way… Came into existence as a “Trojan Horse” because the Federal Reserve could no longer keep the petrodollar on “life support”!… And how we know that is true (https://www.zerohedge.com/markets/944-trillion-reasons-why-fed-quietly-bailing-out-hedge-funds)!…

The West is a bloodthirsty lot as long as others are wounded and dying. They are crying about energy prices and possible future shortages. It’s unfortunate more of those body bags aren’t filled with Nato troops.

The West is pretending the war dead are their own but we all know better. Ukraine has lost more soldiers in this conflict in 140 days than the US lost in 12 years in Vietnam. Maybe double in a country that is one fifth the population.

This war will not end until Ukraine has lost as many troops as America lost in WW2. 300,000.

On the brighter side. THE ONLY FITTING JUSTICE FOR NAZIS AND THEIR COLABORATORS IS A TICKET TO HELL.

Yes, USA-UK-OTAN are willing to sacrifice too the last nasi-fascist ukranian soldier to bring “democracy” and “freedom” to this nazi-goberment. WOW ! USA-UK-OTAN belive that their people are stupid.

Nothing beats making war on the neighbours. One of life’s few joys wouldn’t miss it for the world.