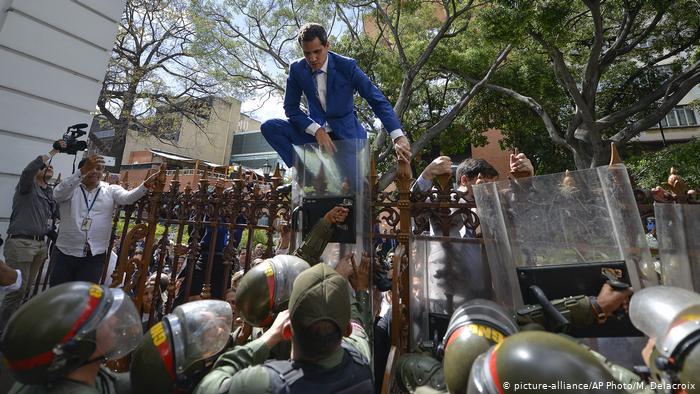 On January 5th, the Venezuelan opposition announced that they are also against their leader, US-Proclaimed Interim President Juan Guaido.

The reason is that, according to them, Guaido used the presidency as a personal project to make himself rich.

According to their statement, the opposition is choosing to move forward without Guaido, as his corruption and failures have been detrimental to their cause.

The parliamentarians declared themselves in revolt against Guaidó for having used the presidency of the parliament as a personal project to enrich himself.

“In  2019 that has just concluded, you were the hope of the country, today you are the biggest disappointment, you could be the future, but today you are and you will be the past, you were a dream turned into a nightmare, Juan Guaidó from today your time ended,” the right-wing opposition deputy, José Brito said.

He continued that they will propose that deputy Luis Eduardo Parra is elected as the new president of the Popular Will Party (AN).

“Guaidó lied to the country and to the international community, he also repeatedly denied to everyone that he was not in talks with (President Nicolás) Maduro and the truth is that you got up and ran back to your main international allies.”

The opposition further urged people to keep going to protests to express their, despite “frustration and hopelessness was eating away at their fighting spirit.”

“Guaidó used the people to consolidate not the forces of change, but their own position of power,” Brito said in a statement.

Guaido was barred from entering the National Assembly, as a result of the opposition losing faith in him.

Member of Parliament Luis Parra was announced as National Assembly speaker, as Guaido claims the same role for himself. Opposition lawmakers called it a coup.

Amajority of congress members held an emergency meeting at the headquarters of opposition newspaper El Nacional, where 100 of the 167 congress members voted to reelect Guaido as their leader for the final year of the 2015-2020 term.

Troops with riot shields blocked Guaido and other opposition lawmakers from entering the chamber.

State television showed Parra, who was recently expelled by an opposition party over corruption allegations that he denies, participating in what appeared to be an improvised swearing-in ceremony inside the legislative palace.

“This is unprecedented!” Guaido told a member of the security forces with whom he had a heated exchange.

“The regime is kidnapping and persecuting deputies, militarizing the Federal Legislative Palace, preventing access and blocking entry to the free press,” Guaido said on Twitter. “This is the reality in Venezuela: the desire for change in the face of a dictatorship that continues to persecute.”

In a televised speech, Maduro recognized Parra as Guaido’s successor, saying Guaido had been “kicked out … by the votes of his own opposition.”

Asked about Parra, a one-time opposition member and ally, Guaidó called him a “pseudo deputy” who had “betrayed the nation.”

“The desperate actions of the former Maduro regime, illegally forcibly preventing Juan Guaidó and the majority of [National Assembly] deputies from entering the building, make this morning’s ‘vote,’ which lacks quorum and does not meet minimum constitutional standards, a farce,” he wrote on Twitter.

In a message that appeared directed at the White House, Luis Parra said, “we want to tell the whole world to quit their regrettable actions of threatening deputies that have been elected by the vote of the people.” Even so, he tried to maintain his opposition credentials, saying he would work to stop Maduro’s allies, Cuba and Russia, from meddling in Venezuela.

OH HOW THE CORRUPT SCRAMBLE FOR POWER.

And scratch each others eyes out as well :)

he first “democratic” president in history elected with 2 votes: his and Poppeo’s

But he refuses. Later, he tried to go over the fence, for the tuiter and mass media photos.

This is another video of an ally of Guaidó, before the vote, when they still thought they could win, saying to a reporter that everyone, including Guaidó, had entered the assambly, except for 2. And they had Quorum.

If the ‘parliamentarians’ are sure that guido has been lining his own pockets whilst those who attend his protests get injured or worse, they should take the evidence to the nearest authorities and get this parasite off the streets. He is making himself rich by insighting riots.

The party are only throwing guido under the bus because the next US patsy is up.

What a dirty corrupt little cunt that Guido is…. fucking maggot.