According to Venezuela’s Interior Minister, Nestor Reverol, Venezuela’s air force shot down a US-registered aircraft suspected of trafficking drugs after it entered Venezuela’s airspace without authorization.

According to the Interior Minister, the incident took place Tuesday. The aircraft was shot down after illegally entering Venezuelan airspace in the province of Zulia, near the border with Colombia.

Venezuela’s military is equipped with advanced Russian military equipment which protects Venezuela’s airspace from hostile intrusions and facilitates the identification and interception of unauthorized aircraft, including the S-300 air defence system which is equipped with long-range radar, as well as Sukhoi Su-30 fighter jets

The Strategic Command Operations of the Bolivarian National Armed Forces (CEOFANB) also intercepted and brought down an illegal aircraft in July.

The announcement was made on the Interior Minister’s Twitter page.

“Disrupted drug trafficking aircraft with US registration, which illegally entered Venezuelan airspace through the state of Zulia. After detecting the illegal air unit with the radars of the Comprehensive Aerospace Defence Command (#Codai), the #Fanb officials activated all the protocols established in the Control Law for the Comprehensive Defence of Airspace.”

The protocols of the Control Law authorize the shooting down of any aircraft that enters the country’s airspace without authorization and refuses to respond to directions to identify itself and its objective, and to land at a designated location for inspection.

The protocols were promulgated in 2013 by Venezuelan President Nicolas Maduro.

The US has repeatedly accused senior Venezuelan officials of drug trafficking and has even offered multi-million dollar rewards for information leading to their capture, including President Maduro at the top of the list. Other senior officials on the US reward list include senior military officials and the chief justice of the Supreme Court.

The officials that have been targetted have all dismissed the allegations as false and absurd, and the US has never offered any credible evidence to support its claims.

Most senior officials of the Venezuelan government and armed forces are also subject to targeted financial sanctions and travel bans by the US as standard practice, on top of the generalized sanctions and economic blockade that have been imposed unilaterally by the US on the Venezuelan economy and people as a whole.

Oh boy the cia will run out of Cocaine Importation jets…?

Ask vlad why Russia is full of drug addictts and alcoholics

You spelled Trump and the U.S. wrong tho Trollstoy…

Same reason your country is.

Good shot buy the way.
It seems the new air defenses are working.

How was it brought down, what happened to the crew, why wouldn’t they cooperate rather than die?

CIA jets usually fly hugging the terrain with all transponders off in grey mode.
They won’t respond to any radio call.
Crew was probably captured.

Or hiding in the radar shadow of civilian passenger planes.

It looks like it was to damaged for the crew to survive.

Maybe, maybe not.
They could have bailed out with parachutes, dangerous but can be done.

Too many secret can be blown up in in introgation rather than die blown with the aircraft, dead man tells no tale

I would assume it was brought down by a SAM.

Look at he photoshoped US flag on the plane:))))) Someone couldn’t get a photoshop updated due to sanctions:)))

It took 30 seconds to analyze the picture and determine it wasn’t Photo-shopped: 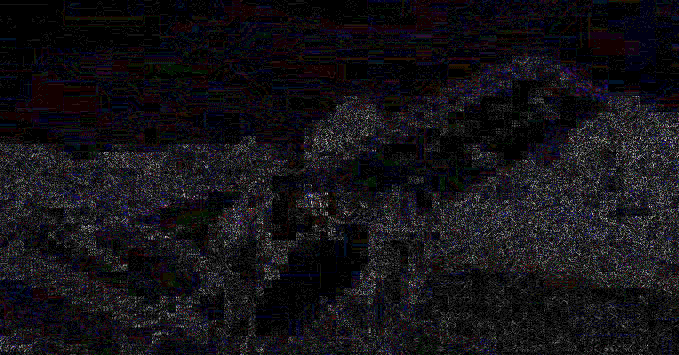 If its not fake, where is the registration number?:))) Or Venezuelans are not capable to work with debris? You are so smart forgot to cover the trail:))) Best of luck next time

Reg Numbers are not on the tail.

thanks. now move on mate. not your level

you wrote to me, not to Volker. Awwww Dory, poor you.

It was a warning to you, unless you want Volker to start giving you a logic beat down.

You are truly a legend in your own mind.

Thank’s for the confirmation.

Because it’s not on the tail. It’s on the fuselage: 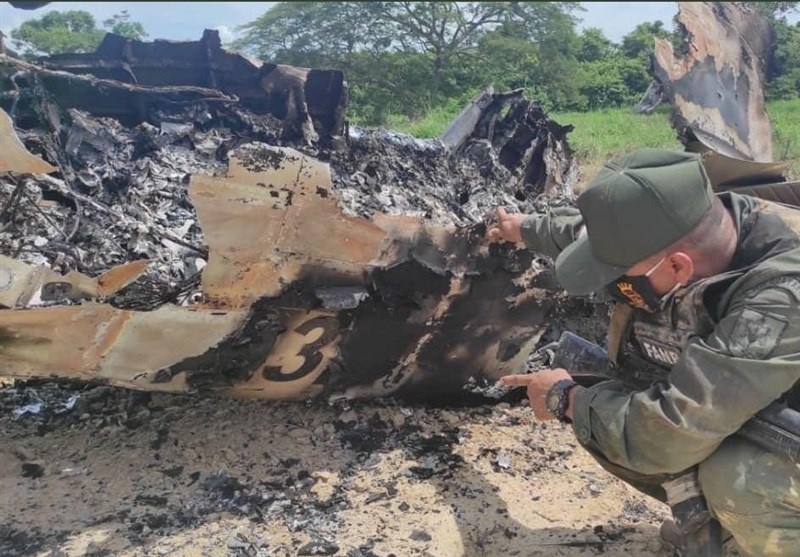 Once again you’re an idiot. ?

Do you have an attention span of a fish? You think i haven’t seen this photo? thats why I asked can’t Venezuelans work with debris? You think its hard to identify the number through burned fuselage?
Mate, when I comment on something I research in detail. I don’t just plagiarize translating from Topwar.ru like the author. Try me mate, im ready for ya.

Like this plane you keep getting shot down over and over again and keep coming back for more. I’m sorry I can’t abuse you like this anymore since I have pity on the mentally ill.

go for it mate. I enjoy this. I don’t even want to get into the downing of the plane, with “scattered” debris and a “long” crash line:))) Ready for ya, any time baby any time

Right now everyone is pointing and laughing at you. It’s would be hilarious if it wasn’t so pathetic.

i have a very little regard to other peoples opinion on me. they can carry on. same way I will carry on with you until you get tired. lets do it baby

You are welcome to call it a defeat or victory as you wish. But it will be up to the readers at the end of the day. so lets carry on. here or on the other comment section, doesn’t matter. all the way baby, all the way.

Maybe this plane shot down by Venezuela is also Photoshopped:

… but since we can read the registration number well it’s clearly not: 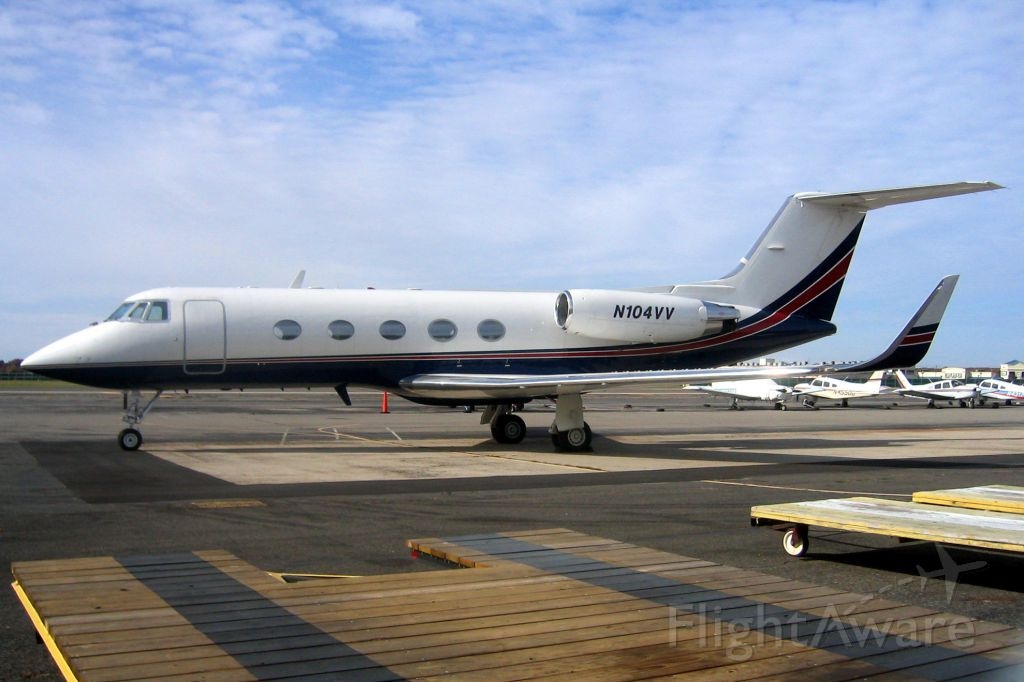 What other tin foil hat conspiracies do you have on this one? We’re waiting …

so you found the number on the previous one?

“You think i haven’t seen this photo?”

If you didn’t see the photo before you wouldn’t of asked where the registration number was in your previous comment. This is way too easy. ?

It’s right there, but the charred portion of the fuselage is obscuring it. You can’t be that stupid. Oops… I probable shouldn’t ask that question.

Awwww, you are stuck in a memory loop. Poor Dory. 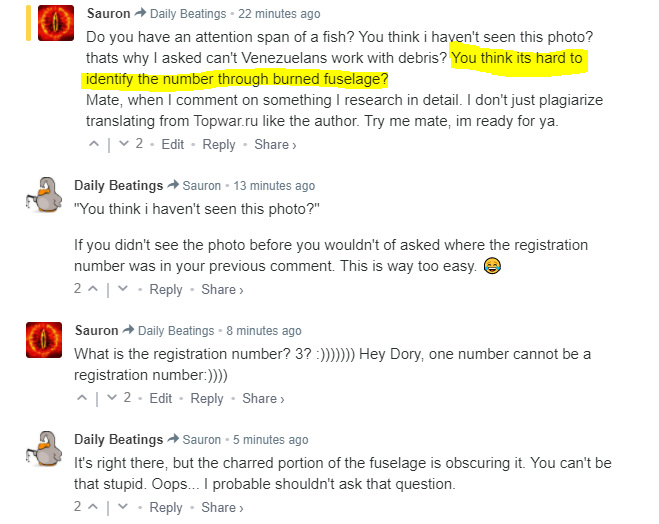 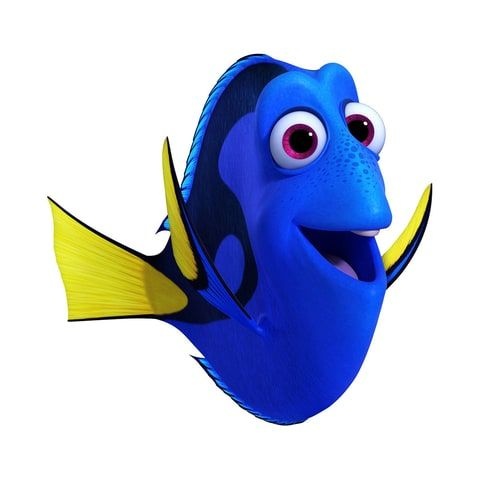 The numbers are either painted on or they’re vinyl decals. Those items are flammable, therefore attempting to read them would be difficult if not impossible Seriously you can’t be this stupid.

Hence they burn on different speed and leave a different chemical trace. Next

Yeah, I bet that guard looking at the wreckage has a mass spectrometer in his back pocket. How about instead they pull parts off the tail section and match the part numbers with the manufacturer’s records? Nay, that would be too easy.

I am all for it. Any method is fine by me. It has been 2 days, still no registration number.
Unless someone is scared to post a registration number for a plane that either has nothing to do with US or is sitting somewhere in the a Hangar:))))) 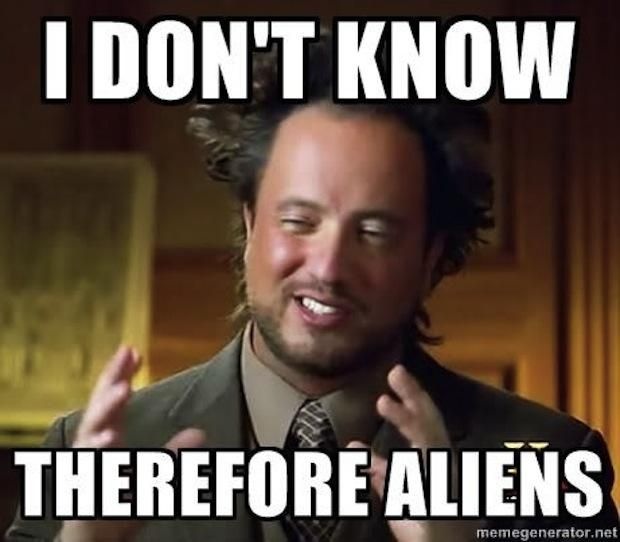 Post any memes you want. They will not replace the reg number Dory:))

Yawn, is that all you can come back with? At least put in some effort. You’re embarrassing yourself.

reg number mate. give me a registration number, come on don’t be shy

Be patience, It takes time to get that information. Don’t be all Veruca about it: 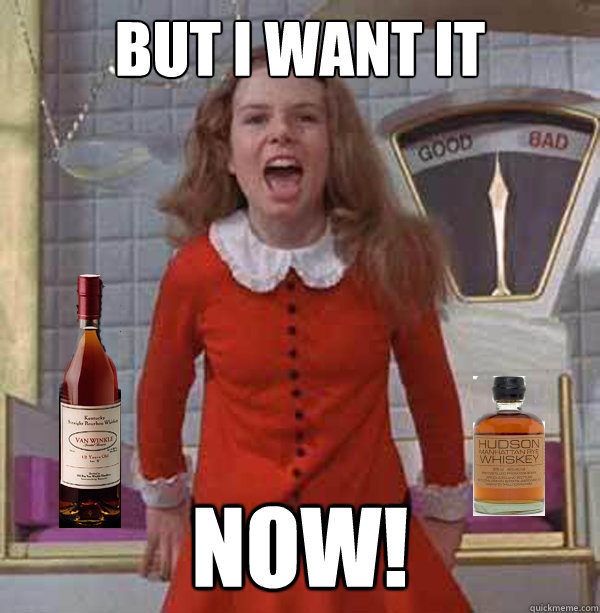 Be patience. It takes time to get that information. Don’t be all Veruca about it:

*Be Patient, not patience.
2days is too long for a reg number. Its not a black box mate. just a number. Easier than making a merengada

Hi Dory, have anything yet?

Sorry that sign off is used by tzatz. Try to keep you sock puppets straight next time, mkay?

NEVER underestimate the inabilities of a moron.

This moron believes you can recreate the numbers from different burn rates and chemical traces of items that are only a few mils thick. It’s unbelievable.

Can he be upgraded, to occasional, once in while idiot at least?

CIA jets sometimes dont have a registration number.
They are ghosts.

Indeed.
Same with red/white painted 737s transporting workers back and forth from Las Vegas to Area 51.

I thought, you were trying to say they were playing slot machine:)))

Nope:)
Las Vegas is also a hub for many companies and military bases.

I see that you’ve had some experience with hookers, cocaine, and gambling.

wont lie, I have. was a quiet an interesting night frankly. but gotta make sure you get quality ones though

Why occupy? can get it anywhere. a family diner near me has a very good bacon for breakfast. delicious

oh, you have been there too? its delicious isn’t it?

thats a pity. you can have some tea then

how do you feel

happy for you mate

You must be a coffee guy…

guilty:))) have 4 types of different coffee at home. 3 my favorite, 4th experimental:)

Or they have false totaly bogus numbers and transponder signatures.

“Comparison with past clinical experience and the rapidity of the response to both Cinchona bark and quinine in many reported cases and case series left comparatively little room for doubt that the drug had beneficial effects on the disease.” 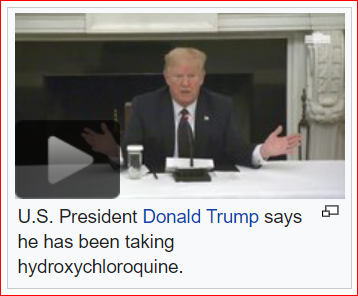 It’s my understanding that you need both. The alkaloids in quinine and hydroxy enable the absorption of zinc, c & d3 to get to the virus to kill it.

A multivitamin and prostrate supplements both contain zinc. I take both. 240 doses of quinine bark is an 8 month supply. That should get at the virus if you already have it. And help stop a different version from making you sick. Without over dosing. By to much at one time. That’s how I’m going to use it.

Thanks a lot Richard !

Don’t you want to know a quality, low cost, easily obtainable way to protect yourself from the virus?

I’m adding Cinchona to my supplementation, in conjunction with zinc, vitamin C and D3. Which is a supplement analog to prescription Hydroxychloquine. To kill the remaining Covid19 in my system if I have it. And as a deterrent if it mutates into something more lethal, to avoid infection or reinfection by the more lethal mutant version. Or we’re attacked with a more lethal bioweapon of it.

Selenium and Vitamin B complex is also a good idea in general.

We have the right to free navigation in International waterways without being shot down by the axis of evils.
Civilian airplanes from Ukraine and Malaysia, US security Drones over Hormuz and now private US business airplanes passing Venezuela, all shot down by Putin with hypersonic WMD.

Good, so what happened to the pilot and any passengers; no mention of them? Drones are doubtful.

LMFAO, They going what Trump said, stopping drugs coming in US.