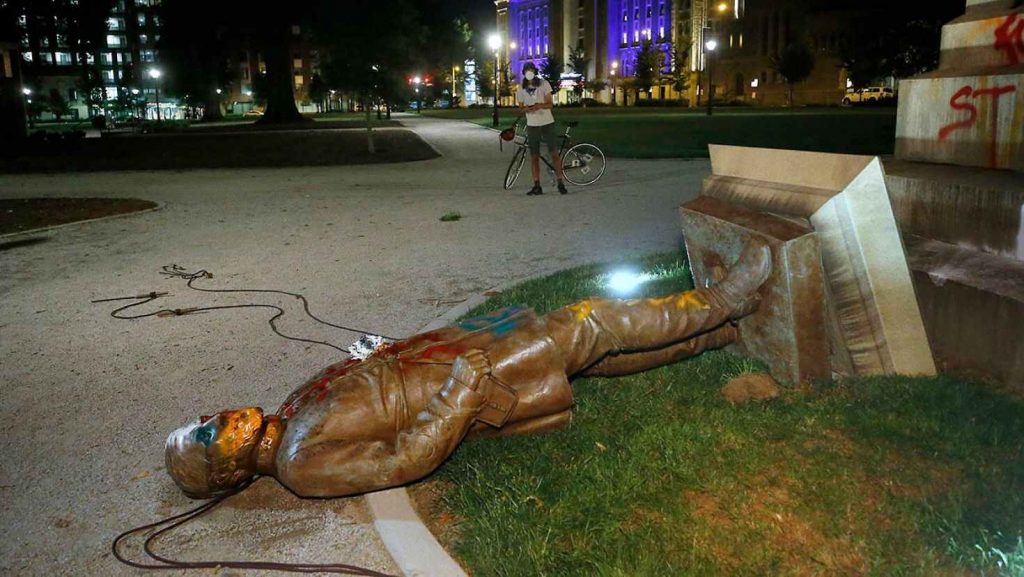 The recent wave of vandalism against monuments across the US dedicated to people or events considered ‘racist’ by protestors have added another dimension of controversy and confrontation to social polarization in the country. People are divided over whether such actions can be considered legitimate, emphasizing the need to debate which people and values should be honoured, or whether they are acts of simple vandalism that discredit and distract from the motives and objectives of the protests, confuse the issues involved and risk provoking more violence as other groups try to protect monuments from being defaced or damaged.

The defacing or removal of monuments has increased in the US over the last few years, to the extent that the monuments themselves have become a focal point for protests and volatile confrontations between opposing groups. In a report on the latest acts of vandalism Fox News comments:

Confederate monuments are a major flashpoint in Virginia and elsewhere in the South. Confederate memorials began coming down after a white supremacist killed nine black people at a Bible study in a church in South Carolina in 2015 and then again after the deadly white nationalist rally in Charlottesville, Virginia, in 2017. LINK

While Confederate statues and statues commemorating Christopher Columbus in particular have been the subject of similar attacks for some time, during the latest wave of protests statues to people or events which could not be considered in any way to be related to current developments have also been defaced and damaged.

During the first week of the protests, photos posted on Twitter by the National Park Service (NPS) showed graffiti on several monuments including the Lincoln Memorial, the World War II Memorial and the Brigadier General Casimir Pulaski statue in Freedom Plaza. 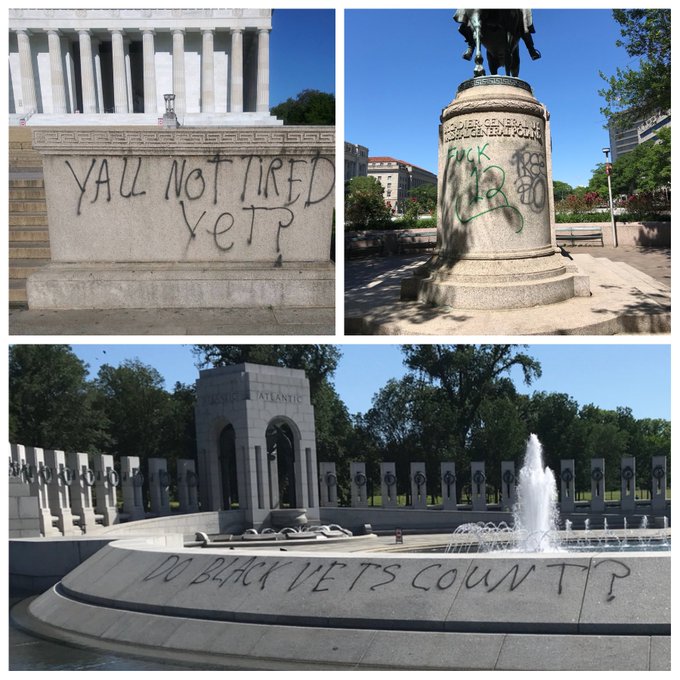 Monuments in Washington D.C. after the protests

Fox News reported that in Birmingham, Ala., a 97-year-old memorial honouring those who lost their lives in World War I was defaced and damaged amid a protest in the public park where it was located.

In Denver, Colorado, a sculpture remembering victims of the Armenian genocide was also vandalized.

“Cops are the evil,” was scrawled on the ground in front of the memorial.

“Since the Khachkar commemorates the victims of all crimes against humanity, including slavery and state-sponsored racism, it is ironic that individuals who claim to seek justice have vandalized the very monument that honors the victims of injustice,” Armenians of Colorado said in a statement. LINK 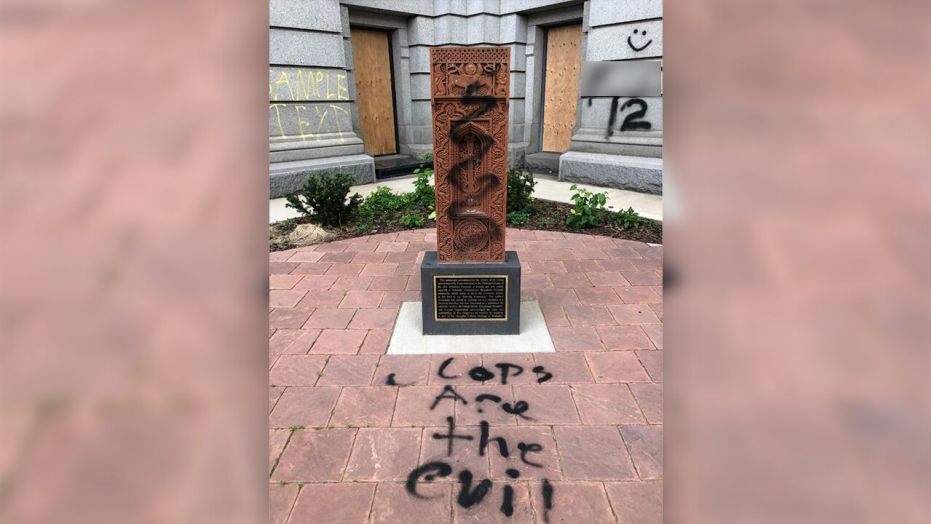 Memorial to victims of the Armenian genocide

Such attacks simply serve to discredit the protests and have no conceivable purpose. They also risk provoking violent clashes with groups trying to defend the statues. A report from Philadelphia last week provides one example of this, noting that a ‘vigilante’ group had been formed to protect a statue of Christopher Columbus:

Here in Philly, we’ve got men armed with bats, guns and hatchets “protecting” the Christopher Columbus statue in South Philadelphia’s Marconi Plaza, a small park at the intersection of Broad Street and Oregon Avenue.

The first reports of armed individuals “patrolling” in the park emerged on Saturday. Protesters say they were harassed and, in some cases, assaulted by some of the statue’s defenders. It didn’t take long for police to show up and put barricades around the statue.

(Mayor Jim Kenney commented via Twitter): “We are aware of the groups of armed individuals ‘protecting’ the Columbus statue in Marconi Plaza,” Kenney tweeted. “All vigilantism is inappropriate, and these individuals only bring more danger to themselves and the city.” LINK

The phenomenon has also been taken up by protestors in the United Kingdom. On 18 June The Sun reported:

MORE than 100 statues and streets names across the UK have now been put up on a website called Topple the Racists.

Protesters want them taken down because of their racist associations, and a map showing all of the “racist” statues in Britain online include memorials of Captain Cook and Wetherspoons pubs named after slave owners…

The website was published by the Stop Trump coalition in support of the Black Lives Matter protests and maps out more than 100 statues across Britain which pay tribute to slave traders and “racists”.

The group said: “We believe these statues and other memorials to slave-owners and colonialists need to be removed so that Britain can finally face the truth about its past – and how it shapes our present.” LINK

Police in at least some districts have been instructed not to intervene if this could put themselves or members of the public at risk. On 11 June the Daily Mail reported that:

Statues targeted by Black Lives Matter protestors will not be protected by the police if it means putting themselves or the public at risk, a police chief has said.

Essex Police Chief Constable Ben-Julian Harrington said it was up to operational commanders to make decisions on whether officers should step in to stop damage to monuments but said people’s safety would be prioritised over property.

Mr Harrington, the National Police Chiefs’ Council’s lead on public order, said more than 155,000 people across the UK had taken part in almost 200 demonstrations, with 137 arrests…

Statues glorifying slave traders and colonialists have come into sharp focus in recent days, as part of a broader movement inspired by the Black Lives Matter protests that started in the United States following the death of George Floyd on May 25. LINK

While the merits or otherwise of specific monuments may be questioned, the acts of vandalism and destruction clearly do not contribute to the ‘peacefu dialogue’ between different parts of the society and provoke more violence as other groups reasonably try to protect monuments from being defaced or damaged.

It’s a sign of the hive mind where statues are pulled down onto the heads of their own fellow rioters and where even anti-slavery statutes get the treatment. And they want to defund the police! Being part of these soros sponsored groups is easy, absolutely no thinking is involved. They profess to be social but attack society instead.

Nobody likes the current situation and all realise that things have to change. However, burning down local businesses and pulling down statues are the wrong targets if one wanted to change anything. The UN, Bilderburg, corrupt politicians, complicit media, the NWO and their social platforms. These are the real villains.

only extremely stup1d idiots keep diverting attention by blaming soros for social problems that lead to protests. stup1d simpletons who cannot grapple with the issues divert to the most convenient scapegoats without an iota of proof. they show their skulls are empty of any substance

And there’s the rub. Here’s me thinking it was all about race, or was it about the cops, or is it about the Trumpster. Maybe it’s statue hate? It seems there is always some piss-poor reason given as an excuse to burn and loot. Damage and destruction only causes a gov’t to think that maybe there ain’t enough cops.

Poor old soros eh, just can’t help giving all his money away for social engineering groups who love to push political agendas. That may sound all well and good for some, but blinded by the present, they won’t see the future that soros and gates have planned. In their future one won’t be able to gather in large numbers or even step into the street without a toxic vaccine in their system.

Free speech is ok, just as long as it’s their kind of free speech, and from the script.

BTW, who spells stupid with the number 1?

The problem with Soros is not that he gives his money away, he’s in charge of the Department of State spendings and his main goal is to form NGOs in every country that leaches the money of their own governments, he creates arificial grassroots that parasites on the tax payer

Its partly fine with me and important changes in the history books has to be made.

But I do fear this also clean too much away, so Americans dont learn the bad sides of themselves as they are and came from.

Its no America thing. Children in Turkey dont learn what actually has happend in that Region and that includes all the way several 1000 years ago. By that You cant blame Turks for not knowing until they search for the many sources rtelling their history books are constructions of the worst kind.

I am also tired of we again see only slave things. In the emmigration there are so many orther very god examples about discrimination.

I think I also see parts of that are the own fault be the socalled bad trested ones. Its also an excuse for a lot including getting pregnant in a young age and a unifying culture based on womens rule by very low wellfare and certainly a lack of the importance of education. Much as its better to have a non rsponsibilaty by remaing as slave ID.

So the changes are needed all over and not only by police being nicer and some statues being moved to heaven or hell.

As written before. They probatly get Biden changing a few small corners BUT they need a Sanders. Mascara and new clothe isnt enough at all.

Its about whats inside You head. I also will remind a lot here why USA was made and many other died as well. It also was created by a contrast to Europe. I do make sense You as civile can defend Yourself against a state. I do make sense education and hard work gets rewarded and it do make sense USA by that also has a very high GDP.

What diesnt make sense is parts of the price for roo many, which are not raised to handle being indepned as the Kapitalisme demands in reponsabilities and possibbilities.

Thats were – as mentioned above – You go nowhere, if You are raised as becomming a looser from birth AND thats supported by the majority giving no hints and money for investing in the ones, which is “Yes We can”.

This guy, Sanders is an apologetic of the Nordic countries social system however that system was built on a disciplined, less violent, culture that was not so diverse like USA. The more diverse you get, the harder is to be disciplined and the social progress is slowing down.

Despite the benefits of the ‘cultural enrichment’ and the influx of cheap workers, they do not compensate for the standards of the economic competition set nowadays by China. Eventually China will buy you first cause y’all good workers that don’t make much noize.

USA is trying everything to catch up, including ‘economic war’. What would clueless Sanders do by slowing down US economy would play for the Chinese.

So imo Nordics praising Sanders are like Titanic orchestra playing a last song.

Book burning, and it’s equivalents. First step to burning thinkers (intellectuals and scholars). What fun, living through a civilisational turn. How sad this turn will be a step or two back for the west, if it succeeds.

More like statues topling than book burning. Nobody burns Lenin’s books in the West.

Catholic Priests are not all you pretend them to be. Open your eyes.

This happened because the iconoclastic Mob were attempting to deface and destroy a statue of a conquistador in New Mexico:

The Establishment is pushing an armed conflict involving communists and anarchists against everyone else, but especially Whites.

Guess which side is better positioned to win?

The working, disciplined people with guns, regardles of their skin color.

In other words, it’s not the BLM/antifa adult babies who are currently smearing their poopy all over every major US cities. As a rule they have no discipline and no self-control.

Nothing new, my nickname comes from that so called anti 1% movement