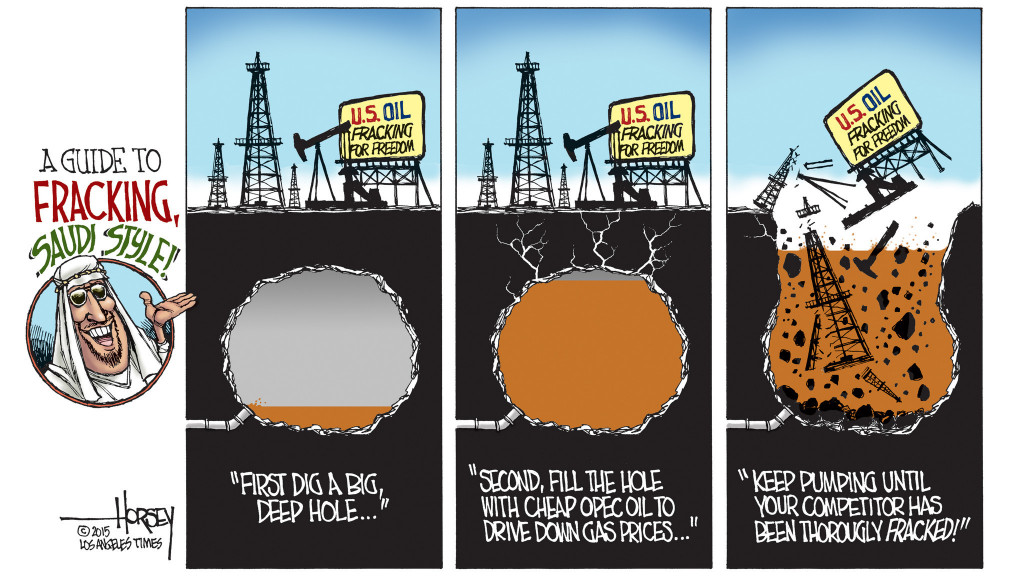 The low oil prices became a problem for the US

Who would’ve thought it would come to this? Certainly not the Obama Administration, and their brilliant geo-political think-tank neo-conservative strategists.

John Kerry’s brilliant “win-win” proposal of last September during his September 11 Jeddah meeting with ailing Saudi King Abdullah was simple: Do a rerun of the highly successful State Department-Saudi deal in 1986 when Washington persuaded the Saudis to flood the world market at a time of over-supply in order to collapse oil prices worldwide, a kind of “oil shock in reverse.”

In 1986 this was successful in helping to break the back of a faltering Soviet Union highly dependent on dollar oil export revenues for maintaining its grip on power.

So, though it was not made public, Kerry and Abdullah agreed on September 11, 2014 that the Saudis would use their oil muscle to bring Putin’s Russia to their knees today.

It seemed brilliant at the time no doubt.

On the following day, 12 September 2014, the US Treasury’s aptly-named Office of Terrorism and Financial Intelligence, headed by Treasury Under-Secretary David S. Cohen, announced new sanctions against Russia’s energy giants Gazprom, Gazprom Neft, Lukoil, Surgutneftgas and Rosneft. It forbid US oil companies to participate with the Russian companies in joint ventures for oil or gas offshore or in the Arctic.

Then, just as the ruble was rapidly falling and Russian major corporations were scrambling for dollars for their year-end settlements, a collapse of world oil prices would end Putin’s reign. That was clearly the thinking of the hollowed-out souls who pass for statesmen in Washington today. Victoria Nuland was jubilant, praising the precision new financial warfare weapon at David Cohen’s Treasury financial terrorism unit.

In July, 2014 West Texas Intermediate, the benchmark price for US domestic oil pricing, traded at $101 a barrel. The shale oil bonanza was booming, making the US into a major oil player for the first time since the 1970’s.

When WTI hit $46 at the beginning of January this year, suddenly things looked different. Washington realized they had shot themselves in the foot.

They realized that the over-indebted US shale oil industry was about to collapse under the falling oil price. Behind the scenes Washington and Wall Street colluded to artificially stabilize what then was an impending chain-reaction bankruptcy collapse in the US shale oil industry. As a result oil prices began a slow rise, hitting $53 in February. The Wall Street and Washington propaganda mills began talking about the end of falling oil prices. By May prices had crept up to $62 and almost everyone was convinced oil recovery was in process. How wrong they were.

Since that September 11 Kerry-Abdullah meeting (curious date to pick, given the climate of suspicion that the Bush family is covering up involvement of the Saudis in or around the events of September 11, 2001), the Saudis have a new ageing King, Absolute Monarch and Custodian of the Two Holy Mosques, King Salman, replacing the since deceased old ageing King, Abdullah. However, the Oil Minister remains unchanged—79-year-old Ali al-Naimi. It was al-Naimi who reportedly saw the golden opportunity in the Kerry proposal to use the chance to at the same time kill off the growing market challenge from the rising output of the unconventional USA shale oil industry. Al-Naimi has said repeatedly that he is determined to eliminate the US shale oil “disturbance” to Saudi domination of world oil markets.

Not only are the Saudis unhappy with the US shale oil intrusion on their oily Kingdom. They are more than upset with the recent deal the Obama Administration made with Iran that will likely lead in several months to lifting Iran economic sanctions. In fact the Saudis are beside themselves with rage against Washington, so much so that they have openly admitted an alliance with arch foe, Israel, to combat what they see as the Iran growing dominance in the region—in Syria, in Lebanon, in Iraq.

This has all added up to an iron Saudi determination, aided by close Gulf Arab allies, to further crash oil prices until the expected wave of shale oil company bankruptcies—that was halted in January by Washington and Wall Street manipulations—finishes off the US shale oil competition. That day may come soon, but with unintended consequences for the entire global financial system at a time such consequences can ill be afforded.

According to a recent report by Wall Street bank, Morgan Stanley, a major player in crude oil markets, OPEC oil producers have been aggressively increasing oil supply on the already glutted world market with no hint of a letup. In its report Morgan Stanley noted with visible alarm, “OPEC has added 1.5 million barrels/day to global supply in the last four months alone…the oil market is currently 800,000 barrels/day oversupplied. This suggests that the current oversupply in the oil market is fully due to OPEC’s production increase since February alone.”

The Wall Street bank report adds the disconcerting note, “We anticipated that OPEC would not cut, but we didn’t foresee such a sharp increase.” In short, Washington has completely lost its strategic leverage over Saudi Arabia, a Kingdom that had been considered a Washington vassal ever since FDR’s deal to bring US oil majors in on an exclusive basis in 1945.

That breakdown in US-Saudi communication adds a new dimension to the recent June 18 high-level visit to St. Petersburg by Muhammad bin Salman, the Saudi Deputy Crown Prince and Defense Minister and son of King Salman, to meet President Vladimir Putin. The meeting was carefully prepared by both sides as the two discussed up to $10 billion of trade deals including Russian construction of peaceful nuclear power reactors in the Kingdom and supplying of advanced Russian military equipment and Saudi investment in Russia in agriculture, medicine, logistics, retail and real estate. Saudi Arabia today is the world’s largest oil producer and Russia a close second. A Saudi-Russian alliance on whatever level was hardly in the strategy book of the Washington State Department planners.…Oh shit!

Now the OPEC oil glut the Saudis have created has cracked the shaky US effort to push oil prices back up. The price fall is being further fueled by fears that the Iran deal will add even more to the glut, and that the world’s second largest oil importer, China, may cut back imports or at least not increase them as their economy slows down. The oil market time bomb detonated in the last week of June. The US price of WTI oil went from $60 a barrel then, a level at which at least many shale oil producers can stay afloat a bit longer, to $49 on July 29, a drop of more than 18% in four weeks, tendency down.

Morgan Stanley sounded loud alarm bells, stating that if the trend of recent weeks continues, “this downturn would be more severe than that in 1986. As there was no sharp downturn in the 15 years before that, the current downturn could be the worst of the last 45+ years. If this were to be the case, there would be nothing in our experience that would be a guide to the next phases of this cycle…In fact, there may be nothing in analyzable history.”

October is the next key point for bank decisions to roll-over US shale company loans or to keep extending credit on the (until now) hope that prices will slowly recover. If as strongly hinted, the Federal Reserve hikes US interest rates in September for the first time in the eight years since the global financial crisis erupted in the US real estate market in 2007, the highly-indebted US shale oil producers face disaster of a new scale. Until the past few weeks the volume of US shale oil production has remained at the maximum as shale producers desperately try to maximize cash flow, ironically, laying the seeds of the oil glut globally that will be their demise.

The reason US shale oil companies have been able to continue in business since last November and not declare bankruptcy is the ongoing Federal Reserve zero interest rate policy that leads banks and other investors to look for higher interest rates in the so-called “High Yield” bond market.

Back in the 1980’s when they were first created by Michael Millken and his fraudsters at Drexel Burnham Lambert, Wall Street appropriately called them “junk bonds” because when times got bad, like now for Shale companies, they turned into junk. A recent UBS bank report states, “the overall High-Yield market has doubled in size; sectors that witnessed more buoyant issuance in recent years, like energy and metals mining, have seen debt outstanding triple or quadruple.”

Assuming that the most recent downturn in WTI oil prices continues week after week into October, there well could be a panic run to sell billions of dollars of those High-Yield, high-risk junk bonds. As one investment analyst notes, “when the retail crowd finally does head for the exits en masse, fund managers will be forced to come face to face with illiquid secondary corporate credit markets where a lack of market depth…has the potential to spark a fire sale.”

The problem is that this time, unlike in 2008, the Federal Reserve has no room to act. Interest rates are already near zero and the Fed has bought trillions of dollars of bank bad debt to prevent a chain-reaction US bank panic.

One option that is not being discussed at all in Washington would be for Congress to repeal the disastrous 1913 Federal Reserve Act that gave control of our nation’s money to a gang of private bankers, and to create a public National Bank, owned completely by the United States Government, that could issue credit and sell Federal debt without the intermediaries of corrupt Wall Street bankers as the Constitution intended. At the same time they could completely nationalize the six or seven “Too Big To Fail” banks behind the entire financial mess that is destroying the foundations of the United States and by extension of the role of the dollar as world reserve currency, of most of the world.