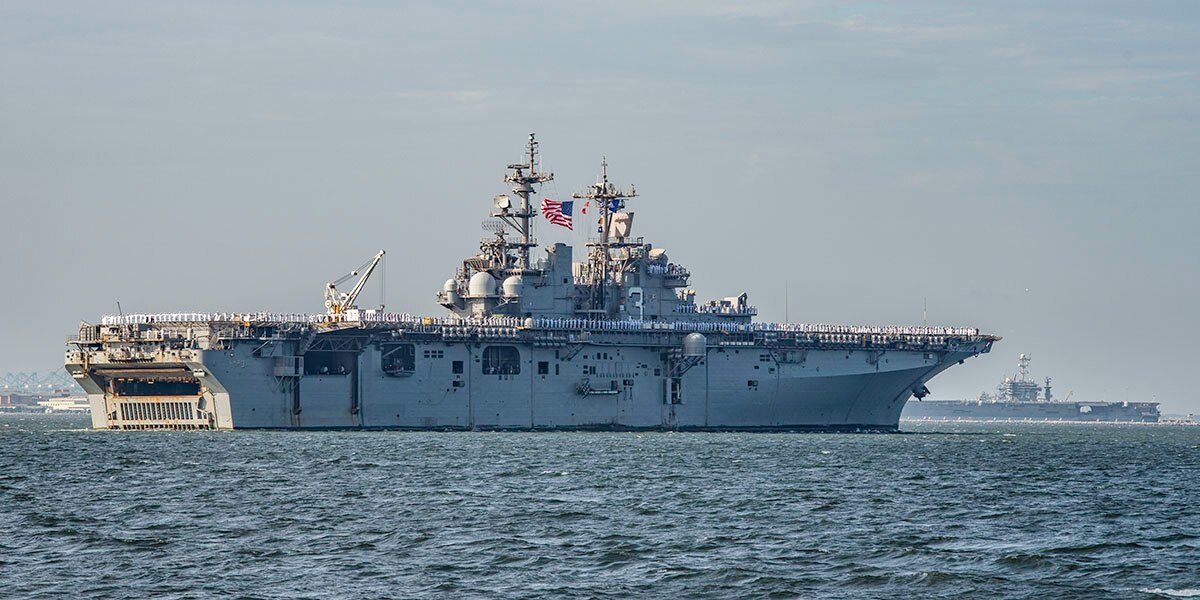 On July 17th, a “rapidly extinguished” fire aboard yet another US warship caused the US Navy to issue a “stop work order” to General Dynamics NASSCO shipyard in Norfolk.

The warship in question is the amphibious assault ship USS Kearsarge.

The incident started when a spark from welding landed on nearby material, which was then quickly put out by the fire watch.

“Fire Watch” is a sailor or contractor who stands nearby with a fire hose and/or extinguisher to stop a larger blaze in its tracks.

“On July 17, the Navy was informed of a fire aboard USS Kearsarge (LHD 3), currently conducting a Selected Restricted Availability at General Dynamics NASSCO – Norfolk,” O’Connor said.

“The fire was quickly extinguished by the fire watch and resulted in minimal damage. In response to this incident, the Navy has issued a stop work order for all ships in maintenance availabilities at GD NASSCO Norfolk to ensure compliance with all established fire protocols and procedures.”

Defense News spoke to Anthony Paolino, a General Dynamics NASSCO spokesman and it was confirmed that the incident involved an ember landing on plastic, causing it to melt and smoke, but said there was no larger fire.

Allegedly, NASSCO was already reviewing its safety protocols prior to the “stop work” order, and that it fully supported the Navy’s ongoing safety stand down in the wake of this week’s fire aboard Bonhomme Richard, Paolino said.

It is noteworthy that just days earlier, the USS BonHomme Richard was almost entirely destroyed in a fire, and it is the same Wasp-class amphibious assault ship as the USS Kearsarge.

Once those investigations are finished, Gilday will determine whether a broader examination of the Navy’s culture is necessary.

“This is a very, very serious incident that I think will force the Navy to stand back and reevaluate itself,” Gilday said. “We’ve got to follow the facts, we’ve got to be honest with ourselves and we’ve got to get after it. My intention, once the investigations are done, is to make this available for the public to debate, including what we need to do to get after any systemic problems that we might have.”

It would appear that the general focus in the United States is currently on fighting racism and discrimination of any sort, and fire safety appears to be on the back foot. Both these fires, within the same week, show a gross neglect of safety protocols (if they are effective to begin with).

let’s sit down and watch.

a “rapidly extinguished” fire since there is no photo of any fire or smoke, the quotation marks reflect more a wishful thinking rather than sarcasm.

I agree. Why Talk about a spark falling on plástic and causes a little smoke! Rubbish . It was a serious fire and they are downplaying It for propaganda purposes.

How do you know, any link or more wishfull thinking?

no link just how the world works. I believe there was a real fire.

I didn’t say it wasn’t a fire.

Neither did I . I just meant it was a significant fire and that the US is now downplaying it for propaganda purposes.

If it was significant there were photos.

Why? So they can admit their fickup?

How big did the fire was? Or how big you wish it was?

Yeah, this is a non-story.

The USN has plenty of problems, but this is really stretching it.

If there were fire watchmen on duty, it was a small fire.

I mean, ive caught myself on fire cutting with a torch, its part of hot work.

When yoy have hot work, in a confined space, you need firewatch.

Glad you survived and got over it.

“ive caught myself on fire cutting with a torch, its part of hot work.”

I learned my lesson about wearing torn jeans to work the same way as you. I walked away from something I was cutting with a quick cut and buddy stopped me and told me my pants were smoking. At first I thought working out was finally starting to pay off …. then I thought ‘that’s kinda gay’ until I looked down and indeed there was smoke coming out between my torn jeans and a padded knee brace I was wearing underneath.

The fact that this generated an incident that shut down naval shipyard repairs is telling. Like you said “the system works” the fire was extinguished without incident yet they still shut down repair and maintenance at a time when they are experiencing a readiness crisis while poking China and Iran with sticks. Dumb as fuck!

I don’t have a problem with safety culture …. I taught CASO safety courses to tradesmen as a sideline for 20 years and as a contractor I did hot work in hospitals, schools and airports working on hollow metal doors and frames. It’s getting ridiculous though.

Like you said the system worked yet they’re shutting ‘er down. Just the other day I talked to a friend of mine who is a contractor safety guy at an oil refinery. If you go to the office and ask the nurse for a band aid it triggers an incident report, you are given a drug test and if you have anything in your system it triggers a month suspension and / or rehab … then a retest. That’s if you simply scrape you knuckle or get a sliver, dig it out with an knife then want to clean it up to continue working.

You can´t focus on everything, all of the time.

While the corrupt factions of the politclown establishment battling for control of the country and one faction is willing to burn whole shithole down – The society infrastructure economy order brakes down – I get my popcorn + beverages ready and enjoy the show – Karma is a Bitch, the Chicken came home to roost.

that is not a problem for the US to build another ship, they have plenty of money (narco dollar$$)

And a great pension system too,in the fkn morgue:

At least its not just Iran then!!

At least in Irans case it’s Terrorism+Sabotage+Cyber-Warfare orchestrated/plotted from the outside, in US case pure inept ‘American Exceptionalism Braindamage’ AKA incompetence.

Sounds to me more like the real reason for stop work order, is lack of available funds. Bankrupt country.

Probably behind all the accidents that hit Yankee land, from ships to petrochemical plants, there is the hand of the resistance axis, excellent job.

Trap Is Not Gay
Reply to  johnny rotten

Sad times, nobody is allowed to name the elephant in the room and instead people go mauling each other at random.

Greetings from Iran … Sorry about that second boat …

Fire insurance. They have to scrap all Air-Carriers as obsoletes. No money. They get shot down by by a Kinzhal missile or China or NK. No money. The cook smoked a cigarette against the rules. Insurance pay.

These ships don’t perform to specifications in the first place, so it follows they’re prone to problems. I haven’t found information that is able to confirm these ships are built using Aluminum in part of their construction. As Zumwalt class destroyers are. If true this would explain much of the difficulty in putting the fire out.

Most of the problem with the Bonhomme Richard fire was that it was in maintenance mode. The fire suppression system was off, and even many interior doors could not be closed due to maintenance lines running through them. Most of the superstructure is indeed made of aluminum to reduce the top weight. These ships are taller than a CVN aircraft carrier ! :) https://uploads.disquscdn.com/images/438a809fe90e2e323241fbba3d9aecaceaa5fa5bcd6906956d4e53d5908b82d9.jpg

Yes I’ve seen them in person. The use of Aluminum in construction of a warship is risky business. The British lost a carrier due to this during the Faulkland Island war. It’s superstructure was Aluminum. Like Magnesium, Aluminum burns, giving off Oxygen as it’s burning. I understand about the the doors being blocked open. One of our customers was a painting contractor, we hauled his sandblasting, and painting equipment to, and from these, and other Navy ships, for years. When I was a kid I worked for a company called Worthington Service Corp. as an apprentice maintenance, and repair machinist. (not the kind of machinist one finds in a shipyard) Split my time between that, and as a mechanic. Working on Steam plants, all kind of pumps turbines, and compressors. Refineries, US Navy, we’re the main customers. Did some work at the GM Fremont CA auto assembly plant on the five Worthington air compressors, and the 10 stage Cooper-Bessemer air compressor at Hercules Powder Company in Hercules CA. Several of the Refineries in the area, and a bunch of Navy ships. Usually at Naval Air Station, Alameda CA. Carriers, a repair ship at Mare Island, in Vallejo, CA, AE’s, Refrigerator ship, and an old tin can. This work didn’t suit my idea of a career, the experience was priceless, and serves me well. I left, to pursue my idea of employment. Hauling all kind of stuff much of it for the military, and contractors working for the military. From frozen food to produce to PX, and troop issue to explosives, and other fun stuff. Did all right about half the 36 years driving the truck in my profile pix. Sure beat working for a living.