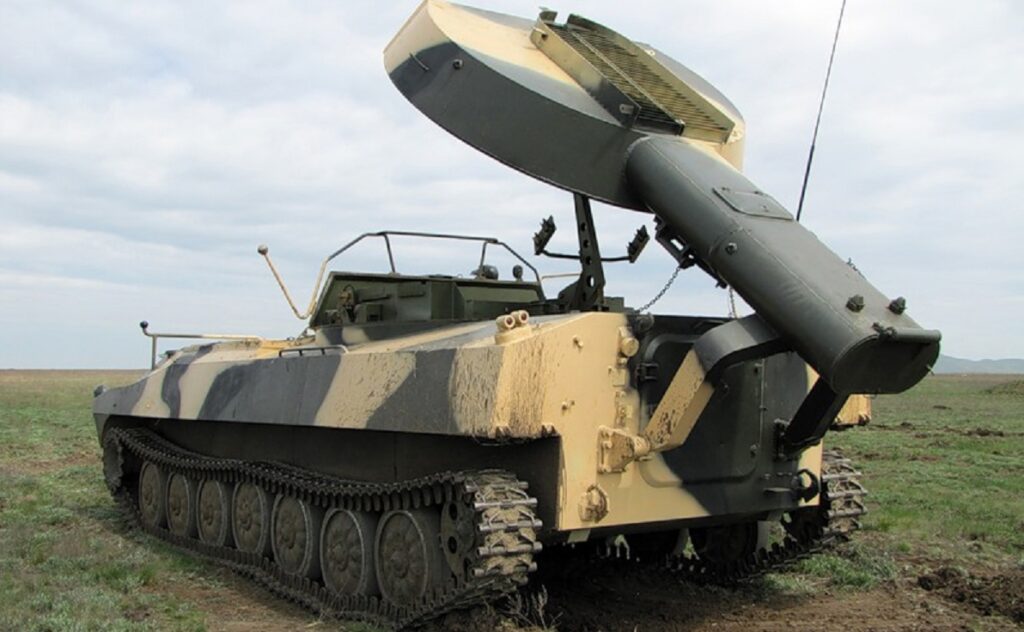 A particular feature of the military conflict in Ukraine is the extremely intense fighting within dense urban settlements with developed engineering infrastructure.

Since the Second World War, there have probably only been four large-scale instances of such combat. These are, first of all, the fighting in Grozny in the winter of 1994-1995, the storming of Aleppo in 2016 and, the fighting in the suburbs of Damascus in 2012 and the storming of Mosul in 2016-2017. All of these examples have common features, peculiarities, and differences from the fighting in Mariupol, Volnovakha, Rubizhne, the outskirts of Kharkiv and Kyiv, and other settlements in Ukraine.

In general, all parties involved in the conflict sought to avoid unnecessary civilian casualties and did not seek to inflict maximum, militarily unmotivated, damage to civilian infrastructure. The exception is perhaps the US Air Force carpet-bombing of Mosul’s urban areas. In the current conflict in Ukraine, Kiev perceives the Russian-speaking population of the former Donetsk and Luhansk regions as unfriendly. Nationalist propaganda led to the fact that, often, residents of these regions are seen only as “human shields” designed to complicate Russian offensives, but not as valid citizens of Ukraine.

In Mariupol, units of the Azov Regiment have had many years at their disposal to establish a deeply echeloned defence system relying on industrial sites, engineering communications and defence strongholds in residential areas. The most heavily fortified area of defence is undoubtedly the Azovstal plant area. 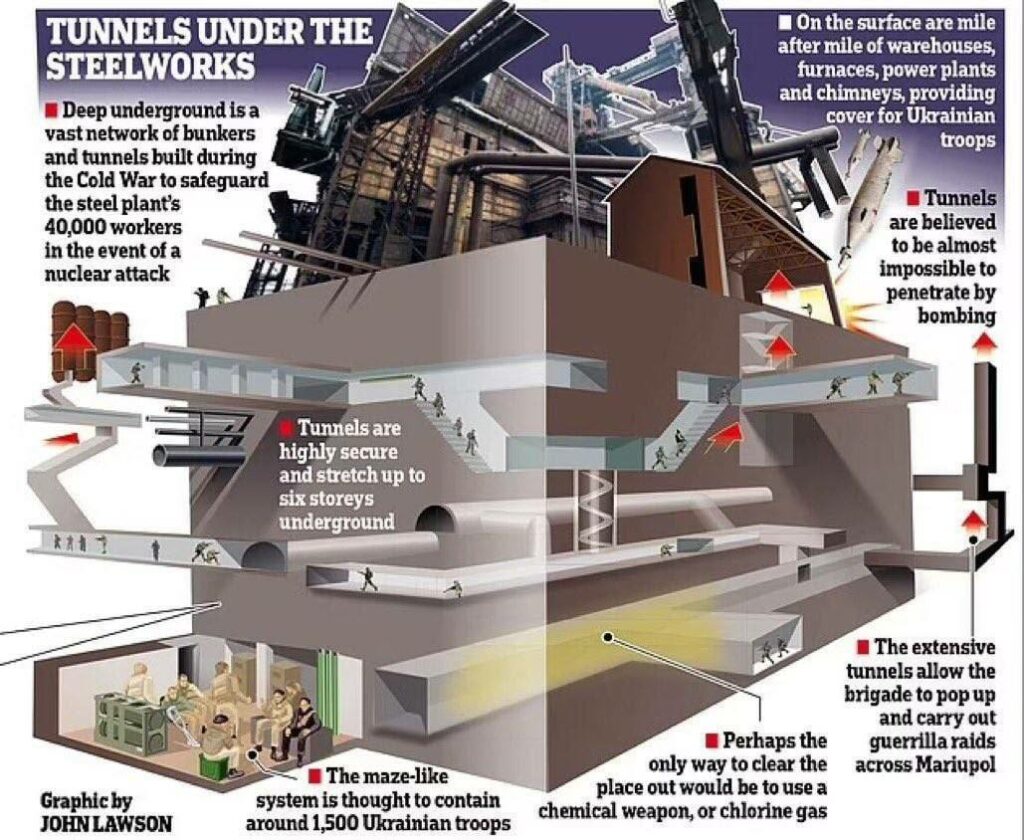 Under these conditions, the advancing units of the Russian and DPR Armed Forces were forced to use “non-standard” methods of fighting. To a great extent, they had to learn on the battlefield. The most successful tactical and technical practices employed by one unit were widely disseminated by the “neighbours”.

One of the “non-standard” methods of using combat equipment was the improper use of the Russian self-propelled mine clearing machine UR-77.

The UR-77 Meteorite is a Soviet/Russian self-propelled mine clearance rocket launcher. It is based on the 2S1 Gvozdika self-propelled howitzer. It has been in serial production since 1978, replacing the UR-67. The UR-77 is capable of cutting through passages in anti-tank minefields during combat. The passage width is about 6 metres and length is 80 to 90 metres. While not designed for anti-personnel mine clearance, the UR-77 can clear U.S. M14 pressure mines from anti-personnel minefields by creating a clearance width of up to 14 metres.
The mine clearance is carried out by generating a shock wave from the detonation of a payload that affects the mine’s fuse.

The machine had previously been used by DPR troops during the storming of Donetsk airport in 2014-2015.

Previously, the Syrian Army successfully used the UR-77 to destroy Islamist strongholds. The first operational use of the UR-77 in Syria took place in October 2014. The machine was used during fierce fighting in the area of Jobar around the eastern outskirts of Damascus. The UR-77 was also used to destroy fortified positions and tunnels of militants near Ar-Reyhan in Eastern Ghouta, Syria. Government forces were able to seize strategic assets in and around the settlement. 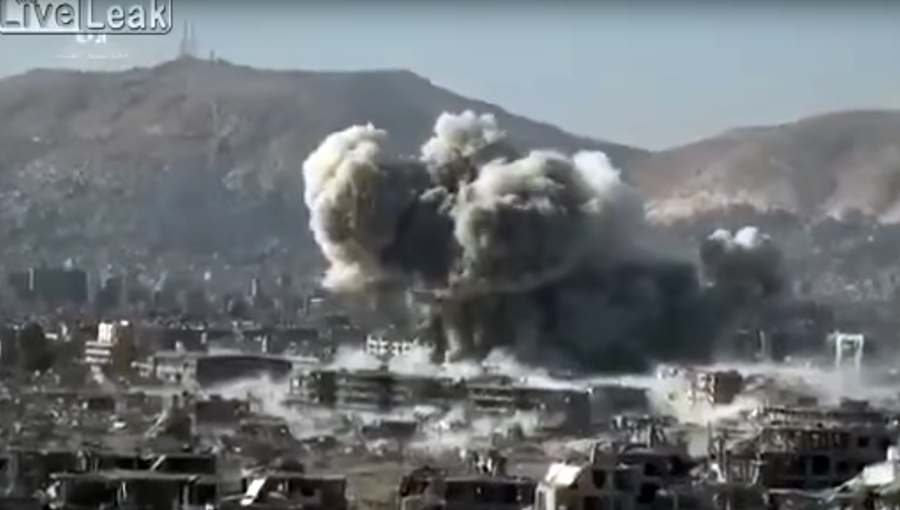 Even earlier, the combat experience in the North Caucasus demonstrated that the UR-77 can be used effectively to eliminate terrorists entrenched in fortified buildings. However, the use of the UR-77 is so radical mean that, along with the enemy, the building where they are located is often destroyed too.

For example, in destroying bridges over the Argun River, it became necessary to use the UR-77 mine-clearing machine in an out-of-the-ordinary way. The combat mission was hampered by an enemy stronghold on the riverbank. As an experiment, two demining charges, each weighing approximately 725 kg of explosives, were launched to suppress it. The explosion of these charges destroyed enemy personnel, weapons and equipment over an area of about 3 hectares. Two other charges were used to disable a metal bridge. Thus, in a complex situation, the non-standard use of mine-clearing machines not only accomplished the task of destroying the bridge, but also defeated the enemy by engineering means without loss of personnel or equipment. Similarly, the UR-77 was also used in the capture of the building of the Council of Ministers, the Kavkaz Hotel and other facilities in Grozny as well as during a fierce fighting in the village of Komsomolskoye.

In the cities of Mariupol and Rubizhne in eastern Ukraine, the use of the UR-77 has also shown its effectiveness not only as a demining tool, but also as an impact artillery asset against enemy firing positions inside urban and industrial areas.

The Russian Armed Forces have a sufficient number of UR-77 systems in service for widespread use on the fronts in Ukraine. According to open sources, there were at least 60 such systems near the Russian-Ukrainian border, as well as in the DPR and the LPR, at the start of the Russian military operation in Ukraine.

“all parties involved in the conflict sought to avoid unnecessary civilian casualties and did not seek to inflict maximum, militarily unmotivated, damage to civilian infrastructure.”

There are two opposing military doctrines on this one. First one is trying to avoid unnecessary civilian casualties. Second one is focused on wining the war…

Nice words, but most soldiers are civilians who are forced to wear uniforms.

Whether they die with or without does not matter in war.

Many of them are Neonazi ,but you are pretends to say they are civilians .

Exactly what Israel did in Gaza in 2014

As Indian generals stated many many times Russian weapon industry is superior.In the 2000’s Russians were also developing secret super tank Black eagle.Our general staff ordered one but something went terribly wrong but never mind.Some says Almost everything in the Russian arsenal that’s supposedly cutting edge like the Armata platform only serves as propaganda pieces for the cameras on Star, RT, and the May 9 parade simply because they can’t afford to produce advanced equipment in large numbers.

it wouldn’t surprise me to find out those T-14s are built just for parades. Everything is probably 3D printed out of plastic. Including the barrel.

Your ma says:It’s a little hilarious how literal they’re taking its shape 😂 only Ussr made dildo’s of course.Dont give up comrade.

Your ma can’t say anything, she has a black dick in her throat. And another two in her behind. Black Yanks fu.ck her, white Yanks fu.ck you.

You are the definition of ”retarded”.

Suk Me Kok
Reply to  Tzatz

You are the definition of “shit”.

no matter for how long you will be pleading ain’t no humping you again :>

if your mum was on here, would you use the same language?

Save The Planet & Always Recycle!

Didnt your parents ever wash your mouth with soap or are they as bad as you. Disgusting filth

I thinks what you want to say actually happen in your country so you just said for cover shameful in your mind.

Mariupol Is 100% Liberated by the Russians

War junkie
Reply to  Mariupol Is 100% Liberated by the Russians

Ukraine lost over 30 thousand soldiers. Russia Lost at least 5000 when I ran the calculations. Find ukis blow them up and move forward. Rinse and repeat. Daily Ukraine loss is about 500. At this point no Russian captured. Captured ones are dead by torture. Ukrainians are surrendering at will. Also I’m seeing Old Ukrainian people dying in combat.

That is Ukrain problem ,they recruit s unexperian peoples to Ukrain army for war fighting.

Donetsk and luhansk were already under Russian control before the war. (Source SF map update). After two months of fighting Russia has nothing more than Donetsk and luhansk. (Same source as above). Special operation is an utter failure. Better pack up and return to Russia. Never again set out on more adventures with this type of military and leadership.

Which map are ‘we’ looking at (above)?

You are not Russian and that certainly is not true: entire southern ukraine from Kherson to Russian border was taken.

Yep !! So keep Paying 5 dollars a gallon for gasoline and food at 20-30% more expensive than before….You ex-conationals, the Russian People, pay 1.60 for gasoline and 75% less for food and will be able to concede you a merciful Free Funeral for being a Moron.

Why Russian must in hurry. Anyway destroyed city are Ukraine city .

Saint Joseph of Georgia (Stalin) left it very clear !! = A judicious amount of explosives delivered by means of artillery, Always Solves all your Problems.

The famed RAF 617 Squadron Dam Busters only used their skipping barrel bombs on two occasions. Far more important was Barnes Wallis’ invention of the earthquake bomb. Each 10,000 pound bomb was hand made by the inventor and featured ground penetrating ability and a delayed action fuse.

The largest success was the destruction of the V1 and V3 projects in the Pas de Calais. The V3 wonder weapon was a 500 foot multi-barrel artillery piece designed to shell London. It was built in limestone bedrock from surface to final depth. It was armoured with high strength reinforced concrete many feet thick, and capped with a 7m concrete roof. The Nazi artillery techs and scientists felt save 500 feet down at the bottom of the weapon.

617 Squadron dropped 5 bombs. A ‘miss’ smashed halfway through the roof and blew it to hell. The others went where aimed and penetrated 30 to 40 through the limestone. Eleven seconds later they shattered the project shafts sending hundreds of tonnes of shattered rock and concrete rubble sliding down. The Nazi scientists and techs are still safe, and still down there to this day: buried alive.

To destroy Azovstal underground positions, Russia needs large, ground penetrating munitions to explode under and around the concrete tunnels. This destroys the foundations holding the position together, creates large cavities, and drops everything into a huge hole. Azovstal tunnels are merely 5 stories deep, say 20 metres, and based in soft marine soils, not 150 metres deep in limestone bedrock. They aren’t defended by massed flak batteries either. So if it ever becomes necessary, then Russia could bury alive everyone there in an afternoon.

They say they were made to withstand a nuclear blast. Not sure why Soviets built this huge underground base there, I kind of doubt it was only to protect steel plant workers

“all parties involved in the conflict sought to avoid unnecessary civilian casualties and did not seek to inflict maximum, militarily unmotivated, damage to civilian infrastructure.”

You haven’t seen the US way of war, have you?

can’t they just pour concrete? or if russia is so worried about hostages and civilians, emp the steel mill