The US Agency for International Aid (USAID) is to allocate $10 million to “improve the conditions for the functioning” of civil society organizations and strengthen their institutional capacities in Ukraine, according to the text of a new project seen by the RT.

In short, the US plans to fund Ukrainian activists in their endeavors.

According to the document, such organizations in Ukraine face difficulties due to excessive administrative burden. In addition, activists often become targets of harassment, and as the 2019 snap general elections inch closer, the frequency and cruelty of such attacks would only increase.

Meanwhile, experts interviewed by RT noted that similar projects have been funded by the United States in Ukraine for many years, it is often not quite clear what activities the grants were spent on. 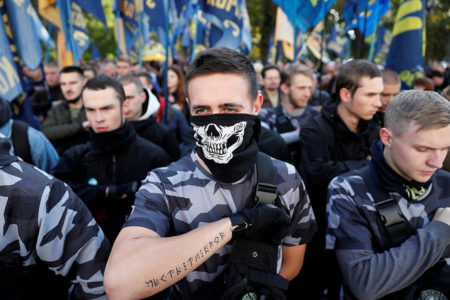 As indicated in the project documentation, the $10 million grant will be paid out among the “local Ukrainian organizations”. And it has a planned length of 5 years.

“The goal of these activities is to improve the conditions for the functioning of civil society and strengthen the institutional capacities of civil society organizations (CSOs) in order to increase the autonomy of the civil sector in Ukraine,” the document reads, according to RT.

Over the last 25 years CSOs have been the engine of “democratic reforms” in Ukraine, but even today they still experience a number of difficulties, the agency said in a statement.

Ukrainian activists need help in strengthening the “institutional capacity”. That is why the United States intends to improve the organizational abilities of such organizations by working on their financial management, building public relations and strategic planning.

In addition, the US agency also intends to start creating “legal conditions favorable to civil society”. Thus, contractors will have to organize information campaigns at the local, regional, and national levels to promote legislative reforms related to the Ukrainian CSOs.

In addition, the USAID document states that these measures are necessary, since “there is uncertainty about the situation with the creation of legal conditions favorable for civil society in Ukraine”. Of particular concern in the States are also bills in Ukraine, aimed at restricting access to foreign funding.

“Civil society organizations in Ukraine still face difficulties due to excessive administrative burdens and new requirements for electronic reporting by anti-corruption groups. In addition, bills on amending legislation regularly appear on the parliamentary agenda, raising the requirements for reporting and restricting access to foreign funding,” the USAID document reportedly stated.

In 2017, the President of Ukraine, Petro Poroshenko, signed a law adopted by the Ukrainian Parliament, obligating non-governmental public organizations to declare all of their income in electronic form.

The US Embassy claimed that the decision may affect the members of the “civil society.”

The USAID was strongly concerned with the frequent harassment of the Ukrainian CSOs. Especially before the 2019 snap general elections.

“Unpunished harassment of civil society organizations and attacks on them are becoming increasingly common in Ukraine. In the run-up to the 2019 elections, the frequency of such attacks is likely to only increase, and their cruelty is also expected to increase,” USAID reportedly noted.

At the same time, the radicalization of civil society activists is a cause of concern for USAID, too. It is noted that over the past few years, ultra-right-wing parties have appeared on the streets, advocating violence and intolerance.

This trend, the document says, can harm Ukrainian civil organizations. USAID provides no suggestions on how to deal with the issue.

As National Research University Higher School of Economics Professor Alexander Domrin noted in a conversation with RT, there is no information on which civil society organizations will receive the said USAID funds.

“The trickiest word in the project is ‘activists.’” Who would be considered an activist from USAID’s point of view?

“This is a very crafty phrase that hides the fact that the United States reserves the right to allocate an additional $ 10 million to support anyone who only speaks out for Ukraine for the interests of the United States,” the expert emphasized.

USAID’s activities around the globe have been criticized numerous times. In 2018 it became apparent that parts of the funds it allocated to Syria and Iraq “may have” fallen in the hands of terrorists, since the organization has no unified policy to assess the risks of financial leaks organizations, which was previously developed by the US State Department.

The United States intends to “remain in Ukraine for a long time” in order to support a “democratic and prosperous” country. This statement was made on April 20th, 2019, on the day before the second round of the presidential election in Ukraine, by the State Department Special Representative for Ukraine Kurt Walker.

“On the eve of the elections scheduled for Sunday [April 21st], I would like to reiterate that the United States is here in the long term to support a peaceful, strong, democratic, prosperous and secure Ukraine,” Volker said.

In April it became known that Washington would allocate between $16 million to $18 million for an USAID project to promote its own “priority goals in Ukraine.”

And in early May, it turned out that the US State Department would spend at least $900,000 “on strengthening democratic processes” during the local elections in Ukraine in 2020.

Washington helps “develop” not only Ukraine. For example, the United States also plans to support “civil society” in northeastern Syria.

The states also planned to “expand” the electoral rights of Georgians and to monitor the parliamentary elections in Georgia in 2024.

In Moldova, the US embassy intended to improve the quality of the content of independent media.

SouthFront previously reported on the US and Integrity Initiative’s joint project in Yerevan which was essentially a seminar on how to organize protests.

The new USAID initiative is one of hundreds of other agency projects aimed at strengthening its interests in other countries, says Yuri Rogulev, director of the Franklin Roosevelt Foundation for the Study of the United States at Moscow State University.

“This, strictly speaking, is what the United States Agency for International Development is doing. They work together with non-government and non-profit structures. And they organize special programs for activists, for future leaders. They also organize special programs for certain categories of the population, for researchers, journalists. So they have a fairly extensive program aimed at working with various categories of the population, mainly young people, who, as they expect, will have a favorable attitude towards the United States,” the expert concluded.

this proves more than anything that the countries that kicked out ‘usaid’ was right in doing so. more countries ought to do the same!

Oh pffffffft, the money ill probably be stolen before they can decide who it goes to. :P