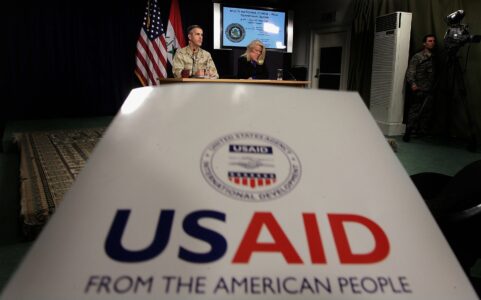 It is unlikely that Washington will be able to decouple Central Asia from Russia, even though it will falsely paint some trade initiatives as major successes or game changing.

The United States Agency for International Development (USAID) funded so-called “democracy support” to the tune of $248 million in the second half of 2022 in countries of the Commonwealth of Independent States (CIS). In comparison, the “humanitarian hawks”, as USAID administrator Samantha Power describes the agency as, invested only $243 million in the entirety of 2021.

CIS, comprising of former Soviet states Russia, Armenia, Azerbaijan, Belarus, Kazakhstan, Kyrgyzstan, Moldova, Tajikistan and Uzbekistan, is a bloc of countries that the US has long struggled to expand its influence and soft power into. For this reason, USAID has significantly increased its investments in the region, with Armenia, Georgia and Moldova, periphery states of CIS, being the biggest beneficiaries of the new grants, especially NGO’s and media.

For educational purposes, USAID allocated $15 million to Georgia alone in the second half of this year, with a special emphasis placed on the need to abolish supposed gender discrimination. The Americans plan to shape Georgian education in their mould by retraining teachers, and thus a grant of $250,000 was awarded to journalism professors from local universities who fit their criteria. In 2021, USAID launched a five-year program in Georgia at a cost $330 million.

USAID has awarded two substantial grants – worth $120 and $4 million respectively – in the second half of 2022 for “democracy development” and “media independence” in Armenia. This aid has been criticised as it does not provide the humanitarian assistance necessary to assist 100,000 Armenians displaced by the 2020 Nagorno-Karabakh war.

The very fact that $124 million in aid has been awarded in the second half of 2022, a substantial amount for a country which had a GDP worth $13.86 billion in 2021, for influencing media and civil society instead of assisting displaced Armenians, demonstrates that maintaining, or in fact boosting the necessary degree of anti-Russian rhetoric in the local mass media is one of the main objectives of USAID’s work in post-Soviet countries.

However, in Moldova and in Central Asian countries, the American agency places special emphasis on financing the economy. Namely, they are trying to weaken the economic ties that these countries have with Russia and redirect the flows of goods and finance. In the last half year, USAID has allocated $50 million to Moldova, most of which is assumed to be spent on expanding trade with the European Union and creating an appropriate transport and logistics infrastructure.

USAID announced in October that it intends to invest $15.2 million in trade in Kazakhstan, Kyrgyzstan, Tajikistan, Turkmenistan and Uzbekistan as Washington wants to “help the region to abandon dependence” on Moscow.

“Reducing Central Asia’s dependence on Russian markets and export routes by providing alternatives was a long-term priority, but it is now a pressing need and an opportunity as we seek to help the region move away from dependence on Russia,” the USAID document said.

According to the USAID document, the war in Ukraine and anti-Russian sanctions have a “huge impact” on the entire region’s economy. Sanctions and the withdrawal of Western companies from Russia “led to a contraction in the Russian economy, which is likely to continue in the long term,” but will also result in Russian imports from Central Asia also decreasing.

“Companies in the region urgently need to find new markets for their exports, both goods and services,” the document added.

The program is supposed to “respond to the economic consequences” caused by the war in Ukraine, such as the decline in remittances, the outflow of migrant workers from Russia, currency devaluation, inflation, and loss of export routes and markets. It is hoped that countries in the region will be provided with “technical support” to increase trade in international markets and help enterprises in matters of logistics.

Earlier, USAID Deputy Assistant Director Anjali Kaur said that decoupling the economies of Central Asia and Russia should be the goal of US policy. In this way, Washington is not even attempting to hide its nefarious anti-Russia actions in a region that is perhaps one of the furthest from the North American continent, and not only in geographic terms, but also in culture, traditions and history.

By increasing its funding of NGO’s and media in Moldova, Georgia and Armenia, USAID is likely to find some successes. Such a success would mostly be attributed to these countries’ proximity to Western Europe and their shared Christian identities, thus making it much easier for Western Liberal influence to seep in.

However, it is extremely unlikely that Washington will be able to decouple Central Asia from Russia, even though it will falsely paint some trade initiatives as major successes or game changing. This is because Russia is a major economic and military power for which Central Asia has no good reason to decouple from.

Unfortunately, dear American geniuses, your situation at home, in the United States, is explosive……… You’d better focus on the inner chaos, which is about to become a mega tsunami……………………….. Ha ha ha ha ha!!!!!

I pay everyone drinks if that happens

They are at full speed in promoting democratic values Worldwide… their Motto is: Love not War while covertly install USA Bases and infiltrate into their Goverment, before you blink LGBT agenda is fully deployed, your Main Stream Media spreads Democracy, Love, Lgbt love…. your Supreme Court only cares about Justice to the Lgbt and your Goverment High Ranking Officials are aliens from other countries now saying they love your land more than you. In the end, you are owned, the military is loyalty to USA Military Might Hegemons and you speak more english than your native languaje…. the Recipe of the Empire… the Dark Empire

Superior Western values = the superior race (Herrenrasse, master race) theory of the West in our days.

Foreign aid tends to end up in the wrong hands, referencing recent report from Nigeria about US weapons delivered to Ukraine that ended up in north Africa. Warlords and criminals will happily absorb american foreign aid and use it to support and equip their armies and supply the black market..

AM Hants
Reply to  bert33

How much of the Afghan weapons the US left behind (worth $billions) are waiting to be used in the nations bordering the Caspian Sea? Coincidence or what?

– Export all technical personnel and professionals to fill roles in depopulated Western economies and to cripple the prospect of truly independent development.

– Invest in domestic companies in order to take control of the high wage-earners (i.e. the “movers and shakers”) who remain; market them Western investments and imports in pursuit of Objective 2.

– Import Asians, Indians, and/or Negros to fill labor positions; partially for economic reasons and partially in pursuit of Objective 1.

– Encourage LGBTQIABCDEFG+ in pursuit of Objective 1.

– Cultivate an information environment such that Western media has a commanding presence and can define “truth” and “civic ideals” in the minds of the populace. Use this for push-pull purposes. Pull cultural mores (and ultimately political and economic realities) towards the imperial core, push away from competitors such as Russia or China.

NGO’s are a poisoned cookie. Poisoned by a political agenda with social engineering, bribes and networking in preparation for political change.

The US ‘money changers’ can only entice parasites to do their bidding. Such people are untrustworthy and venal.

The good news is that such people end up in a Cul de Sac of thieves who destroy each other :)

NGOs are always agents of the Western agenda, which these days means globalist elite and liberal hegemonic agenda (and in the past meant imperialism and colonialism). Their goal is a huge wave of color revolutions, in Iran, China, Cuba, and CIS and more countries. We are getting closer to the end-game of the great cabal.

USAID, a money roundabout of Soros, sets up regime change and the tax payer funds it. How come they have not noticed what happened to Ukraine, before letting the CIA/NED/Soros Operation set up base, in Russian friendly nations?