The usage of the GBU-43 Massive Ordnance Air Blast was another attempt of the Donald Trump’s administration to use force as a tool for solving political problems. 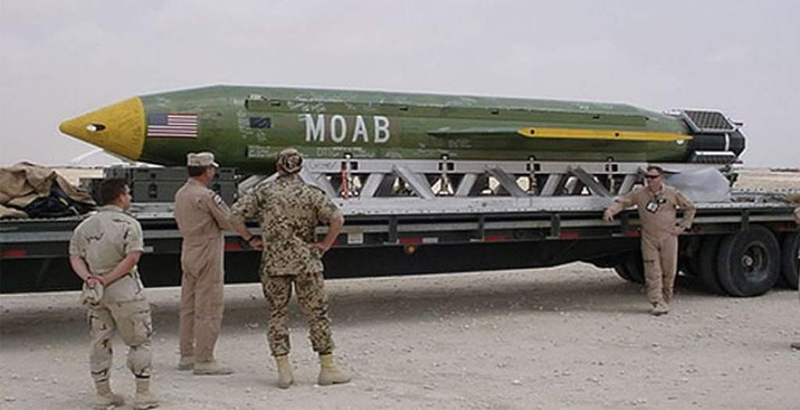 On Thursday, the US for the first time used its most powerful non-nuclear bomb in combat conditions, targeting terrorists of the Islamic State (IS) group. Reportedly, the GBU-43 Massive Ordnance Air Blast (MOAB), also known as the ‘Mother Of All Bombs’, was dropped by the MC-130 aircraft on IS terrorists and their system of tunnels in Achin district in the Afghan province of Nangarhar.

At the same time, the Tolo News TV-channel reported, citing the Afghan authorities, that at least four ringleaders of the local IS cell were killed in the US airstrike. According to the TV-channel, 94 terrorists, including four local IS commanders, were eliminated in the bombardment.

Reportedly, the Afghan Defense Ministry confirmed the data on the killing of 94 militants and local IS leaders, noting that the terrorists’ system of tunnels was destroyed. The Defense Ministry also added that civilians did not suffer in the attack. “There were 22 people in the first protective construction, 62 [militants] were in the second tunnel, in the third – 10 [terrorists], in total, 94 IS militants were killed,” the statement reads.

Tolo News also reported that a ground operation was launched in the district after the Thursday’s strike.

Meanwhile, the Amaq news agency, affiliated to the IS, reported that the terrorist group denied the information that it suffered casualties in the US airstrike.

According to data from open sources, the weight of the GBU-43 high-explosive aerial bomb is 9.5 tons. An explosive mixture of hexogen, tritol and aluminum powder is used in the bomb. The GBU-43 is equipped with a satellite guidance system. The first test of the bomb was conducted in 2003. As it is claimed, in total, there are 15 such munitions on the US arsenal.

US President Donald Trump called the strike “a very successful mission” of the US Armed Forces.

Meanwhile, on Saturday, former Afghan President Hamid Karzai said that the usage of the US superpowerful bomb against IS terrorists had been planned in advance, and the presence of militants was only a pretext for testing this weapon. As Tolo News reported, Karzai said that the bombing had been pre-planned and was a test of the weapon of mass destruction. He also stressed that the US used the IS as a pretext for their actions, as well as criticized the country’s current government that allowed it to be done. “If the government approved this, this action can be called a betrayal,” the TV-channel quoted his words.

According to a political scientist and deputy director of the National Institute for the Development of Contemporary Ideology, Igor Shatrov, the US becomes prone to “spectacular gestures.”

“In fact, it really was a bomb’s test, as it was its first combat use. In this regard, we have seen a certain position, a certain new feature of Trump. He is inclined to spectacular, ‘beautiful’ gestures with usage of the armed forces. Note, this demarche with the deployment of a naval group in the direction of North Korea or the bomb’s dropping – not the result, but the picture is important to him. And it seems to me that we will see many such spectacular, but dangerous gestures during the reign of Trump. The US has shown that is has the most powerful weapons, it has been emphasized that it was a powerful non-nuclear bomb – of course, it is a signal to the whole world and to Russia in particular. All this is called to ‘brandish the arms’,” Shatrov said on the air of the Sputnik broadcasting station.

According to him, the strike with the ‘Mother Of All Bombs’ was specially carried out on the eve of the international conference on Afghanistan, which will be held in Moscow.

“The US shows that it is prone to solve problems by military, but not peaceful means. On the Afghan issue it tells us that it is able to solve this problem without any involvement of the world community. In addition, the US fears to find itself on the second positions and therefore it did not agree to participate in the conference in Moscow, where, in its opinion, Russia will lead. But it has no policy, no definite approach to the solution of the Afghanistan’s issue, except for the usage of weapons. For this reason, the US is not ready to participate in the negotiation process. The same, by the way, we see both in Syria and North Korea. We see that now the US has once again started to flex its muscles. We do not see a negotiating policy in any direction,” the political scientist noted.

Military expert Mikhail Khodarenok also noted that the fact of the usage of the GBU-43 high-explosive aerial bomb in Afghanistan is just a “showing of the capabilities” and “flexing of muscle.”

“I personally do not think that the only one dropping of this bomb will somehow affect the overall situation in Afghanistan. Some specific tasks can be solved, of course, but this will not bring a breakthrough in the general development of the situation. This is more a flexing of muscle. This is a demonstration of the capabilities for us [Russia], [North] Korea, Iran and anyone else – look, what we have in the arsenals and this is not everything,” Khodarenok said on the air of the Sputnik broadcasting station.

A military political scientist, an associate professor of the Department of Political Science and Sociology in the Russian Economic University named after G.V. Plekhanov and a retired lieutenant colonel Alexander Perendzhiev also expressed the similar point of view.

“US President Donald Trump tries to show that new, more effective weapons appear during his presidency. And for him it does not matter that this so-called ‘Mother Of All Bombs’ was tested at the beginning of the 2000s. The presentation was made primarily for Iran and North Korea. In this way, the leaders of these states were let to understand that their developed underground infrastructure can be destroyed by American special weapons,” Perendzhiev told the RIA Novosti news agency.

He also stressed that the presentation of the US high-power bomb took place precisely in the period of tensions on the Korean peninsula and in the Middle East.

“The strike of the US Air Force with the ‘Mother Of All Bombs’ against militants of the Islamic State in Afghanistan is another act of a military muscle-flexing that has little practical usefulness for the fight against terrorism,” former chief of the armament of the Russian Armed Forces, Colonel General Anatoly Sitnov, said.

He noted that the effectiveness of the first combat use of the GBU-43 cannot be called high. “This is a purely political step, as well as the strikes on Syria, now there is a tug of war, a demonstration of force. If there were a systemic usage of such bombs, this would be one thing, and, in this way, it turns out that they just showed what they have. There is practically no sense in this, they, as they say, have produced a pile of chippings in Afghanistan, and have done this in the way to produce more noise,” Sitnov said.

He explained that usage of such aerial bombs is effective when an enemy uses casemates and a wide network of underground fortifications, and IS militants, who hide in the mountains of Afghanistan, do not do this.

Now 94 dead Daesh dirtbags. Looks like the tunnel area was taken afterwards to count bodies and collect intel. Perhaps ISUS reported 0 loses because there was no one left alive to contact HQ. :) They love to hide like cockroaches, their problem is sometimes an exterminator shows up.

I am not an accountant, but 94 is greater than 35 and 0. I support the destruction of ISUS in all countries. Are you confused that Trump has done this? Some seem to believe that US is giving support to Daesh. LOL

well attacking shayrat airbase definitely helped daesh, they launched an offensive on SAA shortly after that

A small attack by a few Daesh squads means nothing. They also like to attack when sand storms are active to ground SAA air support.

They tried going for the base I heard

Consider where those Daesh units attacked a few hours after the missile attack. Was towards the west where they had a short route to the Lebanese border where Daesh is in control.

I thought they just tried going straight for the airbase itself

Maybe the 36 missing Tomahawks hit Daesh. Trump should drop ALL his non-nuclear bombs on Daesh, leaving none for N. Korea!

I’d save some for Israel and Saudi too

Saudi sure, they are part of Daesh. though Russia could bomb Saudis after Trump runs out of bombs on Daesh.

I would love nothing more than to see Russia manhandle those zionist Wahhabi takfiri bastards!

Most Americans would cheer if Russia bombed Saudi Arabia.

i bet! i wonder if america would come to their aid?

It would certainly split the deep state from public opinion like nothing else I can think of.

The US is a rogue state that increasingly sees conflict as the only answer to its own short comings and collapsing economy.

i know. i wonder, did the soviets do this kinda stuff before they collapsed?

Its all about dollar and dollar and at last but not least DOLLAR! The oil have to be sold by dollar currency, if any government trying to sell with other currency, that country will be bombed soon by the west! Even North Korea accept dollar in own country!

North Korea prints their own dollars.

And they look a lot better than the genuine

So why trump wants to.bomb it?

How can we have a collapsing economy when the unemployment rate is 4.5%?

I disagree, the US economy is growing faster than true rogue states like Russia. Bombing of communists, islamists, terrorists etc is morally desirable because the world needs cleaning

Russia is no longer Communist, apparently you may be unfamiliar with other sides of the story.

We can find plenty of conflict with anti abortion forces without bothering Russia or N. Korea. Though the abortion rights YPG can protect Russian bases without Assad.

trump gave free hand for army in war against isis. also about big bada boom in afghanistan was informed after it.

And ISIS deserves it, as does Taliban. This is a non-issue.

Russia should be using their versions of air burst bombs against the extremists so the SAA can advance more rapidly without suffering heavy casualties. They could do the first drop on a ruined town or village which has no inhabitants except for extremists fighters so the West can’t squawk about it. The result of the blast should get everyone’s attention and highly concerned about being caught in the general vicinity of the blast, so should heed warnings to vacate areas when warning leaflets start being air-dropped on the next targets. The SAA can use drones to verify who leaves the area before dropping a big one on the remaining extremists or moving in quickly if it appears that they cleared out, too.