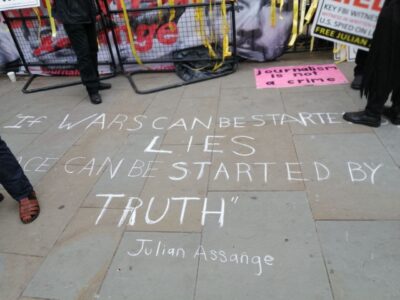 SF foreword: our team expresses its full support to Julian Assange and all those who are fighting for justice and his immediate release.

On the 27th and 28th of October prosecutors for the United States tried to persuade two High Court judges that they should overturn the decision made in January not to extradite Julian Assange to the US.

Outside the court there was a lively protest that was addressed by various speakers including Jeremy Corbyn. He made an impassioned speech demanding the British authorities immediately release the award-winning journalist from Belmarsh prison. 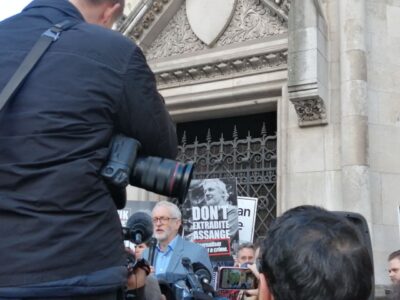 The two judges presiding over the US appeal continued the British judiciaries unfair treatment of Assange by denying his request to be present in court.

Day one of the appeal was taken up with the case laid out by the US prosecution. The prosecution’s case had two points of attack.

The first point of attack was the claim that Julian Assange was a malingerer who was only ‘moderately depressed’ and was very unlikely to commit suicide if he was transferred to the brutal  prison system in the United States.

The American prosecution, which is being funded by the UK tax payer, repeated the tactics that it employed at the extradition trial back in September 2020. It attacked the testimony that psychiatrist Professor Kopelman gave at the September trial. Indeed, the prosecution went further arguing that Koplelman had lied to the court and that the legal weight of his testimony should be downgraded.

“… how misleading it is to call this deceptive. Kopelman made the court aware of this fact well before the September 2020 extradition case, the judge addressed this in her ruling, and she explicitly said that she “did not accept that Professor Kopelman failed in his duty to the court.”

The US prosecution was trying to undermine Professor Kopleman’s assessment that Assange was a high risk case for committing suicide if he was transferred to a US maximum security prison where would be kept under solitary confinement. 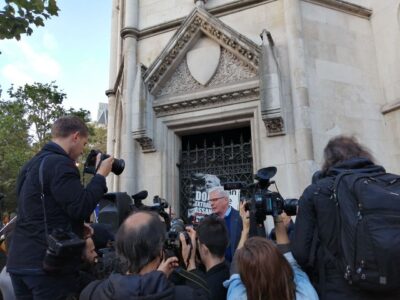 Fitzgerald for the defence reminded the judges that:

“… in her January 4, 2021 ruling, District Judge Vanessa Baraitser carefully weighed defence and prosecution testimony and evidence, applied the appropriate test based on relevant case law (Turner v. USA), and reasonably found overwhelming evidence supporting the finding that ordering his extradition would put him at grave risk of suicide.’’

The second point of the prosecution’s case revolved around various assurances that the American government is now making to the court with regard to Assange once he is in US custody.

These “conditional’’ assurances took several forms and were laid out in some detail by the US prosecution. Julian Assange’s defence lawyers pointed out that the US prosecution’s assurances are late and should have been given during the extradition trial last September.

Assurance number one was the claim that if Julian was extradited to the United States he would not be placed under the ultra-conditions harsh known as special administrative measures (SAMS). This is a form of solitary confinement where the prisoner has very limited contact with family or even their attorney.

This assurance came with the caveat that Julian Assange could be put into SAMS at the discretion of the Justice Department if it believes the WikiLeaks editor has committed any action that could be construed a national security threat. 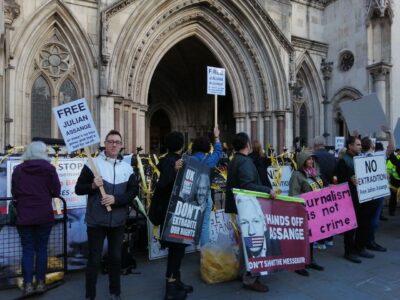 The attempt by the prosecutor to claim that the US Bureau of Prisons does not practice solitary confinement is a blatant lie.

Back in 2012 the National Immigrant Justice Center, a US based human rights organisation wrote:

“The hole, AdSeg, protective custody, SMU, SHU—are all terms used to refer to solitary confinement, a form of incarceration where a prisoner is locked up for 23 hours a day with little or no human contact. Prisons often hide behind these rhetorical labels to avoid scrutiny under legal sanctions that prohibit indefinite placement in solitary confinement and require due process for those who are sentenced.’’

Assurance number two was that Julian Assange would be able to serve any sentence imposed by a US court back in his home country of Australia.

There is no indication that the government of Australia would accept this arrangement. It has displayed complete indifference to the psychological torture of one of its citizens. So why does the US assume that it would be receptive to such a measure?

This assurance ignores the fact that the transfer of Julian Assange to an Australian prison would have to through many appeals and span many years. His defence lawyer observed that, “On the evidence, Mr Assange will most likely be dead before [this assurance] can have any purchase, if it ever could.”

Never mind the fact that the US has made such assurances before to other countries and broken those promises.

Assurance number three was the claim that Julian Assange if convicted he would not be facing the 175 year prison sentence that his defence lawyers claim. To substantiate this unfounded claim the prosecution pointed to the case of a recent whistle-blower Daniel Hale, who exposed the US drone assassination programme, for which he received a 45 month prison sentence.

This conveniently forgets the case of whistle-blower Chelsea Manning, with whom Assange is accused of conspiring, who was sentenced to 35 years in prison.

As the defence lawyers pointed out these assurances that have been given by the United States are not worth the paper that they are written on. How can the court have any faith in these assurances when this is the same country which plotted to kidnap and assassinate during Assange while he was in the Ecuadorian embassy? Yahoo News broke this story several weeks ago after speaking with over 30 former US officials.

At the end of the two day hearing the judges closed proceedings with the declaration that both parties had “given [them] much to think about.”

The two judges gave no timeline for when they would deliver their verdict. So an innocent man convicted of no crime continues to languish in a British maximum security prison full of violent offenders.

After the court finished several speakers addressed the crowd of Assange supporters outside.

Several made the point that history is full of examples of political prosecutions where it has been the campaign waged outside the courts that has made the key difference to getting the accused released. The case of Chelsea Manning is a highly relevant. She received a 35 year prison sentence yet was pardoned by Obama thanks to the massive international campaign that demanded her release.

“Extraditing Assange would be handing him a death sentence… Make your voice heard, put pressure on the media and to politicians everywhere. Julian Assange cannot be extradited.’’

Shame on the U.S./UK govts.

the truth must be assassinated…in America truth is a crime

true, as it is in most of the world.

“amerikans have been liars and braggarts for 3 centuries”. Daniel Boorstin “Obama’s job is to lie to a nation of liars”. Kiese Laymon “the cult of sincerity; amerikans are not sincere–it is a performance”. David Riesman “the cult of friendliness–amerikans are only friendly when they want something”. Christopher Lasch “the men amerikans most admire dare to tell them the most extravagant lies; the men they most despise try to tell them the truth”. HL Menkhen