On August 15th, Turkey announced tariffs on US goods in answer of the higher tariffs introduced on Turkish steel and aluminum by the US.

Turkey will impose an additional 50% tax on U.S. rice, 140% on spirits and 120% on cars. There are also additional charges on U.S. cosmetics, tobacco and some food products. Hurriyet cited IMF statistics, according to which the US was the fourth largest source of imports to Turkey in 2017 with $12 billion of imports. Turkey’s exports to the U.S. in 2017 amounted to $8.7 billion, making it Turkey’s fifth-largest export market.

The decision comes after on August 14th, Turkish President Recep Tayyip Erdogan called for a boycott of US electronics, including Apple’s iPhones to retaliate to the Trump administration’s sanctions and tariffs imposed over the last few weeks to pressure Turkey into releasing Pastor Andrew Brunson, who is imprisoned with charges of supporting the 2016 coup attempt. Erdogan has rejected Washington’s pleas, saying that Turkish judiciary won’t take orders from abroad.

Erdogan warned that the US is putting decades-old alliances at risk and pushing Turkey to seek allies elsewhere.

Vice President Fuat Oktay said on Twitter that with the decision Turkey is giving a proportionate response to the US attacks on the Turkish economy. “Under the principle of reciprocity, the tax rates for imports of certain products have been increased against the US administration’s conscious attacks on our economy,” was his statement.

President Donald Trump allowed for the implementation of higher tariffs on Turkish steel and aluminum on August 10th. Following the action, Trump commented: “I have just authorized a doubling of tariffs on steel and aluminum with respect to Turkey as their currency, the Turkish lira, slides rapidly downwards against our very strong dollar. Aluminum will now be 20 percent and steel 50 percent. Our relations with Turkey are not good at this time!”

The Turkish lira has been declining since the US imposed sanctions on two Turkish ministers on August 1st. The tariffs on steel and aluminum have just accelerated that. The lira has lost more than 45% of its value this year. On August 14th its value went up by 8.4%, however on the morning of August 15th it was down 0.7%.

On August 14th, Turkey’s national Turkish Airlines and its main telecoms firm Turk Telecom announced that they are halting advertising in US media in response to the tension in relations between the countries. Both companies made their announcements after a campaign on Twitter calling for an end to advertising in US media outlets.

Reuters cited an official at one of the companies said the advertising boycott would encompass all written, visual and social media, although existing advertising campaign agreements would not be affected.

“We as Turkish Airlines are taking our place alongside our state and people,” senior vice president for media relations Yahya Ustun wrote on Twitter with the hashtag #ABDyeReklamVerme, meaning “don’t give advertisements to the USA”. Hamdi Ates, corporate communications director at Turk Telecom shared a similar message on his Twitter.

On August 14th, an anonymous White House official, cited by Reuters claimed that the US is warning of more economic pressures if the Pastor is not released. The official also said that “nothing has progressed” so far in the Brunson case. “The administration is going to stay extremely firm on this. The president is 100 percent committed to bringing Pastor Brunson home and if we do not see actions in the next few days or a week there could be further actions taken,” he further commented. Further actions would likely take the form of economic sanctions, the official said, who added: “The pressure is going to keep up if we’re not seeing results.”

It makes you wonder why so much pressure is being brought to bear on Turkey, just for a pastor under house arrest, while all over the world Americans are rotting away in shithole jails without a tear being shed about them in the US. Does the guy have some special connection to the Trump clan? Or……, are they trying to bring Turkey to heel so the US can go ahead with arming and creating its breakaway Kurdish republic in Syria?

The ‘pastor’ isn’t a ‘pastor.’ He is CIA. CIA used the same front in Central and South America for decades. The priests or ‘pastors’ had certain exemptions with regards to customs and diplomatic access, so they made good ‘fronts’ trying to slip them under the radar. The same has happened in Africa. There was one ‘pastor’ in the middle east somewhere (can’t remember his name) who wasn’t even Christian, he was Jewish, and one of the Arabs found his photo in a year book or something in a school in ‘Hebron’??? or similar. So, there was a Jewish Israeli guy, pretending to be American, who scammed a job working for the CIA, and got transferred ‘under cover’ as a ‘pastor’ to the Middle East (for some reason I thought it was Iran but I can’t find the article), and got outed when his photo was tracked down in a Jewish high school year book in Israel. Busted! The Arabs shot him after the U.$. put the heavies on them trying to get him back. My auntie also knew about it (she was a federal cop AU).

It’s always about money and that last failed coup attempt against Erdogan was pretty much the tipping point.

Or is Turkey the new target for “regime change” as their Syrian adventure is ending in failure.
The eastern third of Turkey is largely Kurdish, many more Kurds there than in Iraq or Syria.
Creating “Kurdistan” out of Turkey would still achieve their two goals, surrounding Iran and a good possibility of eliminating Erdogan.
The war could carry on with millions more in arms sold to the Kurds etc.
Erdogan did back up Qatar when Trump and the Saudis attempted their coup of Qatar.
If Erdogan has any clue, he will cooperate with Assad.

I respectfully disagree, as Turkey is a NATO country. And there are a lot of other NATO countries, Spain, the UK, to name a few, who have troublesome minorities with a history of wanting to break away. And they don’t like it when precedents like this get created. Just look at how silent all of the EU was when Spain clamped down on the Catalans trying to break away.

No one in Europe will shed a tear about Erdogan falling from power, but the breakup of Turkey, that will be seen as a disaster.

Also, even if Erdogan were to fall from power, there is no way in hell that any new Turkish government will allow the Kurds to break away. That is the one thing that unites every Turkish political party across the entire spectrum (except for the Kurdish one of course), including Gullen in the US. They will ALL send in the army to crack down on the Kurds if they were going to do that.

‘,,,the breakup of Turkey, that will be seen as a disaster…’

Not so sure. These are maps published in Pentagon policy proposals from 2000’s, based around partitioning post-invasion Iraq, but part of that proposal involved partitioning a huge slab of Turkey into a Kurdish project (this was published pre-Syrian war): 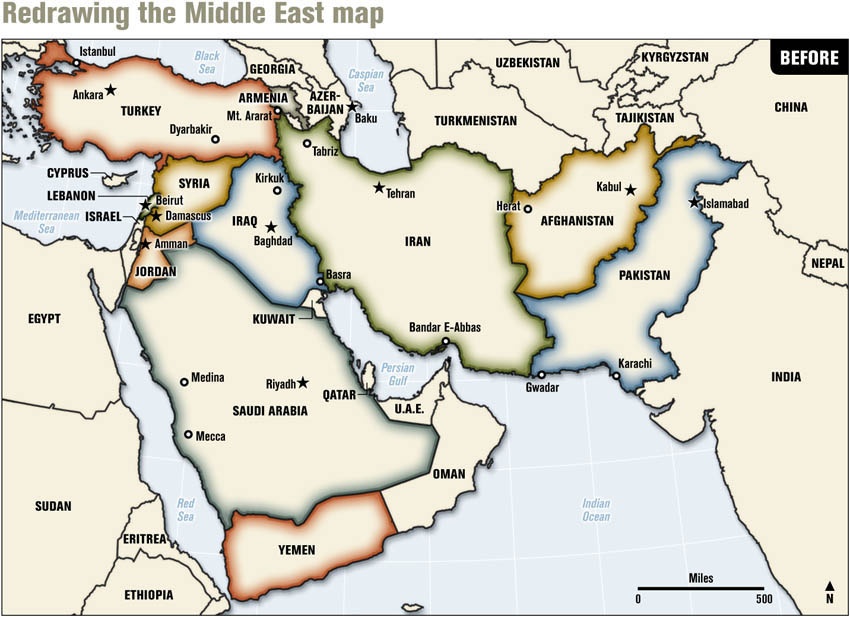 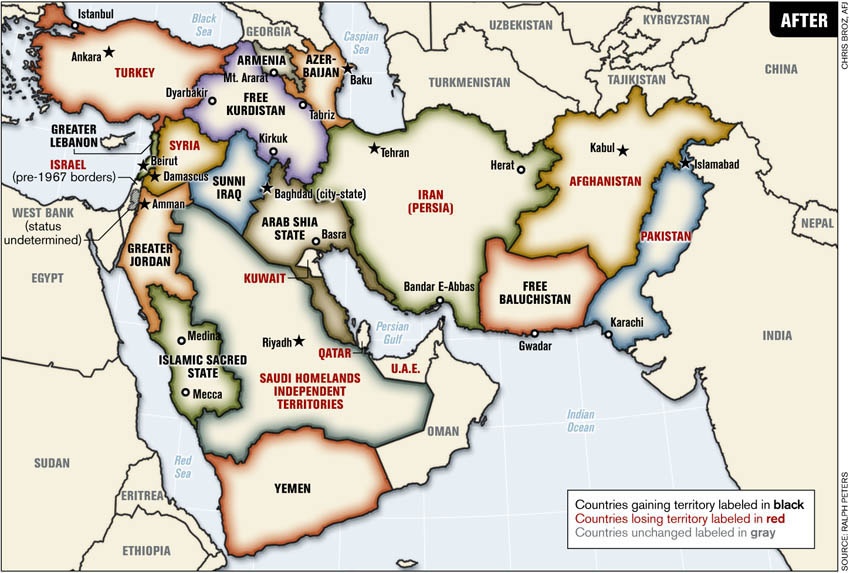 This map is prepared by Colonel Ralp Peters and was published in Armed Forcesd Journal on 2006, 3 years after Condolezza Rice spoke about changing borders of 22 countries in ME.

Turkish intelligence was informed about these strategies, and tthis was the main reason why TR refused deployement of US Troops in Turkish soil before Iraqı war. The area which US asked for deployement in Turkey is exactly the same area which was being planned to be carved out of TR.

Anyone can make a map. Looks like fake news to me. The US sucks Saudi cock like mother’s milk comes from it. And considering that money comes from it, and Americans worship money that’s basically the same. Like the US would want to slay the goose that lays the golden egg by breaking up Saudi Arabia.

And unlike America there are in Neo-Cons in Europe, nor is there anyone in Europe who even dreams that breaking up the Middle East is a good idea.

The US has shown that it wants regime change in Turkey, that’s why they staged the failed coup in 2016. Erdogan seems a bit miffed, that his one time boss(USA) tried to kill him.

He is CIA, that’s why they care, if he was just an ordinary American, they would let him rot.

“Turkey will impose an additional 50% tax on U.S. rice, 140% on spirits and 120% on cars. There are also additional charges on U.S. cosmetics, tobacco and some food products” after the ” Erdogan called for a boycott of US electronics, including Apple’s iPhones”

Sencer
Reply to  You can call me Al

%140 on US produced sprit , others are the same. Tourists will drink Scoth instead of Kentucky for a while . No big deal.

Not US cars , cars manufactured in US. Some series of Mercedes , BMW and many others are being produced in USA and they will be subject to %120 additional tax.

It’s good for Turkey if the Lira drops, like it was for Russia. Exports will boom imports will plummet. They must not try to raise interest rates or spend money to try to prop up the Lira that is the trap. Russia should have kept interest rates low and started creating its own currency and put that money into infrastructure projects etc., as Turkey should now do . If Russia had done that Russia’s GDP would be growing over 7% since 2017, but racist supremacist Jews still control the Russian central bank to a large extent. The Lira drop is political nothing to do with economic reality. Turkey needs to stay calm keep it together. As their major energy suppliers are facing similar drops in their currencies for the same political reasons the Turkish economy will be largely insulated from any real long term economic harm if they stay cool and de-dollarize their economy. Their only worry is USSA denominated dollar debt which China can help refinance with its 2 trillion USSA dollar reserves. Turkey can change trading rules for Lira to burn racist supremacist Jewish bankers and make billions off of them when Turkey changes Lira trading rules etc.Its one thing they can do at no cost to themselves

okey ride on… personally as a greek i like that a lot…i hore that erdo will continue up until the destruction of his economy… Long Live trump !!!

Most American food products only sell, because of the huge subsidies the US pays to farmers.
If the world could stop the market manipulation carried out by the US and EU, farmers in poor countries could compete, and bring in export dollars.
Competition is the enemy of the capitalist countries.