From next month the US will send troops to Syria to help enhancing the resistance against the occupation of the Islamic State of Syria and the Levant in the region.

In a swift to their policy for fighting the terrorist group, the US have decided to deploy troops on Syrian ground in order to advise, train and assist the rebels who are also struggling to recover territories under contr 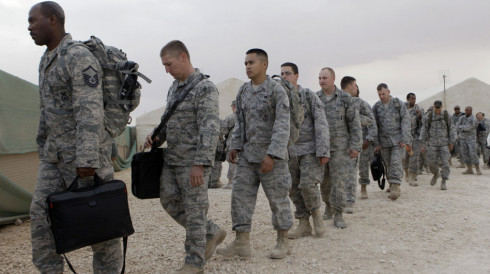 US servicemen in a row

ol of the jihadis.

This new strategy shows up amidst ISIS occupation of Ramadi in May and American failure to efficiently train and aid Syrian rebels besides their low effectiveness to attack ISIL targets.

In addition to the troops’ deployment in Syria, the US decision to include Iran in the negotiations to reach a diplomatic solution to the conflict is also a tremendous change to the government of the US stance over Syrian conflict since the beginning of the operations against ISIS led by them, since September of 2014.

By sending new troops (not more than 50 men according to US officials) the possibility of reaching a diplomatic solution to Syrian conflict weakens.

This measure was praised by some members of the Congress who stated that it was already time for America to assume a more aggressive campaign against terrorism in the Middle East. Others, on the contrary, said that sending troops overdue wouldn’t change things that much.

Once the new troops arrive to Syria next month, they are supposed to be based in rebel-controlled areas to help resupplying them on their way to Raqqa, declared capital of the Islamic State and could also help coordinate air strikes from the ground, US officials said.