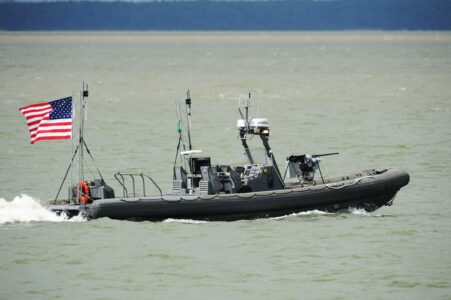 US Central Command (CENTCOM) announced Saturday that a US-led task force will deploy over 100 unmanned vessels to the Persian Gulf by 2023 as part of a regional effort against Iran.

“By this time next year, Task Force 59 will bring together a fleet of over 100 unmanned surface and subsurface vessels operating together, communicating together and providing maritime domain awareness,” CENTCOM chief Gen. Michael Kurilla said at a conference in Bahrain.

Task Force 59 is based in Bahrain, the home of the US Navy’s Fifth Fleet. The announcement came after the US and Israel accused Iran without evidence of a drone attack on an oil tanker near Oman.

Kurilla said that the greatest threat in the region was the development of “adversary drones.” Besides deploying the drone boats to the region, Kurilla said CENTCOM was also “building an experimentation program here in the Middle East to beat adversary drones with our partners.”

The US is looking to foster cooperation between Israel and its Arab allies against Iran, which has become possible since Israel signed normalization deals with the UAE and Bahrain in 2020. Israel is hoping to build a regional alliance with the Gulf Arab states, but it will take time, as some are still hesitant to collaborate openly with Israel.

Israel’s planned alliance focuses on the idea of integrated air defenses. Brett McGurk, President Biden’s top Middle East official on the National Security Council, said at the same conference in Bahrain that the US is “actively building and enabling an integrated air and maritime defense architecture in this region.”

The US effort to increase military cooperation against Iran comes as nuclear deal talks have been stalled for months, and tensions are soaring between Washington and Tehran. The US has been increasing sanctions on Iran and expressing support for anti-government protesters inside the country.

The Pentagon’s recently issued Nuclear Posture Review acknowledged that Iran is not building a nuclear weapon, but that hasn’t stopped Biden administration officials from threatening Tehran over the issue. Robert Malley, the US special envoy for Iran, said that the US would use military action as a “last resort” to prevent Iran from acquiring a bomb.

That’s so much better than having any aircraft Carriers over there, besides no carrier would ever again be allowed to go in or leave the Persian Gulf.

It raises the stakes for Iran cos of the low risk to U.S lives.

The same lie over and over, ad nauseum. Why not tell the truth? The truth is that Israel and the US are terrified at the thought of war with Iran’s drones and missiles. The US has already admitted that they know that Iran is not building or seeking nukes…so this is the same Israeli lie told a 1000 times. But the US population is continually lied to by the very people that should be telling them the truth, but they get their vacation money from Israel, who steals it from us, so…politician…the international word meaning LIAR. In the case of US politicians, it is also synonymous with thief and traitor.

The citizens of America don’t care about the foreign policy that’s why a majority always right away believe the bullshit sickening lies.

When ALL the press goes blah blah blah Iran bad. What else is there to hear, the side that says Iran not bad is shut out and never heard from.

The Objective
Reply to  zman

Shiite Iranian Mullahs lie about their nuclear intention. I won’t believe a word they say about it even if my body is full of ears. They are lying 100%. Anyone who doubts this doesn’t know the Shiite idealogy and will regret it. Iran wants nuclear weapons! Your persistent lies hasn’t convinced the world so why keep trying? Think of a better way to conceal your intentions.

Don’t forget that they nuked Soleimani’s convoy in Iraq in 2020 and the Mullahs haven’t done anything up to this moment. You are the guys always dodging a fight when it stares you in the face. Soleimani’s brutal extermination proved this beyond all reasonable doubts. Cowards posing as brave people.

Last edited 6 days ago by The Objective
-10
Reply

William White
Reply to  The Objective

The lies from Iran are a small garage, the lies from the USA and Israel are a city of sky scrapers!

What do you want 100 drones of cheap American technology to do? They are limited in mobility, the Persian Gulf is large. Iran has one of the largest fleets in the world.

When Israel has nuclear bombs, it goes without saying that Iran must also have the right to have nuclear bombs.

Now all they have to do is connect all these drones up to an AI for autonomous operation. Then you could be set up for an unknown AI to hack into the drones and take them over and return to sender.

I heard from a birdie that the Bermuda Triangle is expanding and plans to open 2 branches, one in Bab-el-Mendeb and the other in the Persian Gulf. They also plan to have a third one close to Gibraltar in the Atlantic but that will be decided if the first two are box office “hits”. Just sayin’, so don’t cry if the drones disappear without a trace. UFOs donnit!

PS. Something is brewing in the northern region of Iraq. Negotiations are underway but we may enter, secure it and hand it to the official Iraqi armed forces. Turkey is waiting to go in deeper if that happens. The real prize is the border crossings between the Iraq’s northern region and the occupied part of Syria under PKK/Americans. That was the reason the new Iraqi PM had a meeting with Barzani the nephew, where both reiterated they won’t allow any threats from this region against a certain neighbour. It might be too late for that. You should’ve thought about it before agreeing to become a flank for Aliyev’s adventures.

Russia should park some of those off Florida!

Iran is a big ally of Russia so Russia should give them some of their nuclear bombs and then the US and israhell terrorists will shut up .

iran was considering blocking the gulf, so the nato machine is moving to stop it. Iran drones will distroy them

some of them will be captured and Iran will improve the design and export it, increasing its revenue and military capabilities. The same happened with US drones near Iran

In your wet dreams, phaggot.

Shtiskin goat fuckers in Iran are not capable of any production or even copying. These inbred ugly monkeys are only capable of fucking goats and fucking their nephews.

Oh, this looks wise! Is this the US statagy with Russia and China? I can see the US and Natostan will love this when these remote controlled devices show up in their waterways. Absolute brain dead idiots always fomenting war and conflict.

Imagine any other country on Earth doing this and one realizes that they prefer nuclear war than exposing the genocide against the world’s population.

Thank you for the usual ‘unintended’ tech transfer USN……lol. Iran thanks you for the charity.

In your wet dreams, phaggot.

Shtiskin goat fuckers in Iran are not capable of any production or even copying. These inbred ugly monkeys are only capable of fucking goats and fucking their nephews.

Everything copied quickly and you get nervous diarrhea from this?…..lol. Don’t make me come down there now……If Khamenei gave the order a million will rush your border in Israel and fucking swamp you. Just like the Pashtu did in Afghanistan. You better get your head around this.

Meanwhile race war, homelessness and a drug abuse pandemic rage on in the streets of America.

Time for ya to move to the glorious inbred faggot heaven called Iran then.

More provocations from the US

I’m pretty sure that Iran has 100 missiles capable of hitting their targets.

Coming soon to the black Sea.