Norway is going to host about 330 US Marines at a military base, located near the Russian border. 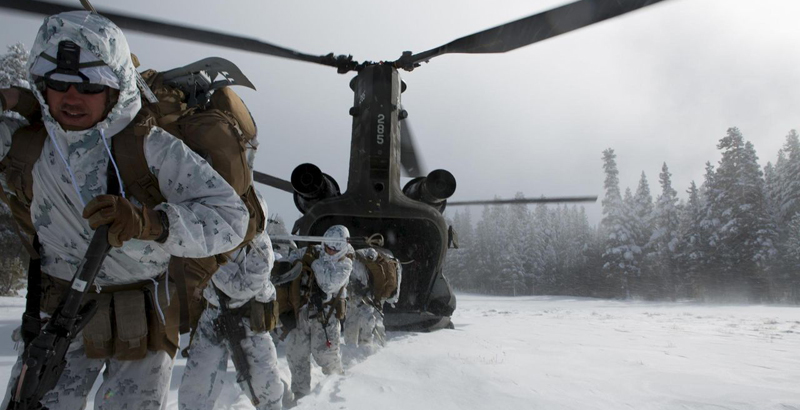 About 330 US Marines will be hosted by Norway at an airfield in Vaernes city, located just outside Trondheim, near the Russian border, as nuclear-capable ships are deployed by Russia to Kaliningrad. The sending of the US troops is planned for January.

“The US initiative to augment their training and exercises in Norway by locating a Marine Corps Rotational Force in Norway is highly welcome and will have positive implications for our already strong bilateral relationship,” Norwegian Defense Minister Ine Eriksen Soreide said.

Training exercises have been regularly conducted by the US in Norway, which has a 122-mile border with Russia in the Arctic. Earlier this year, Marines from the 2nd Marine Expeditionary Brigade took part in Exercise Cold Response alongside troops from other NATO countries.

Pre-positioned military equipment is also hosted by Norway in climate-controlled caves, located all over the country and staffed by 100 Norwegians and Americans, in order to equip 15,000 combat-ready Marines.

While US troops continue to approach to the Russian border, Russia has also reinforced its military presence in Kaliningrad, located between Poland and Lithuania.

So, two new Buyan-M class corvettes, the Zeleny Dol and the Serpukhov, capable to carry the Kalibr cruise missiles with a range of 930 miles, were deployed to Kaliningrad. Moscow is also going to deploy three additional vessels in the area sometime before 2020. The Bastion and the Bal land-based anti-ship missile systems are also expected to be deployed by the Baltic Fleet. Both these systems will make travel of NATO naval vessels in the Baltic Sea more difficult, as they have a maximum range of about 188 miles.

Moscow has decided to reinforce the Baltic Fleet, after a scheduled deployment of the nuclear-capable Iskander-M missile system was moved up by Russian President Vladimir Putin.

Maybe it is only me, but the perception is that US troops are not sophisticated enough for winter warfare. At least not as much as Russian or Norwegian.

Or as much as the Finns, they did very well against the Soviets during the ‘Winter War” . The US Army also did well during winter in the Korean war. Read about Battle of Chosin Reservoir if interested.

Finns won because of other reasons, not winter advantage, nevertheless they are pretty good as well. US did very well in that battler though it was a loss and was against newly established, ill prepared China. Honestly I would hesitate to judge by battles of 40s, 50s.

the korean war was not a normal war. there were a lot of strange things going on before and during the war. the US had the ability to carpet bomb the border preventing chinese army to intervene. they did much worse things to german civilians, why not to the chinese army? the person who called for this action got fired, mcarthur. the korean war was a very dirty war, you can calll it a planed war.

north korea and china were invited to go to war. everything the US and the south korean government did was to encourage an invasion from the north.

They did indeed do well, but they had a definite advantage because of their air supremacy.

to disturb the russians bear?