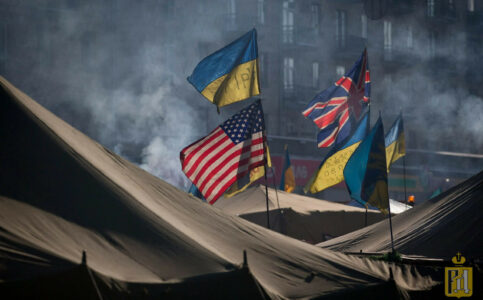 Washington exercises even more control over the Kiev regime, establishing its own military command, increasing the presence of numerous foreign-backed NGOs, as well as sending US corporate advisers and representatives.

Ukraine was never seen as a particularly sovereign country. However, in 2014 any semblance of independence was lost for good when the political West used the Neo-Nazi elements of the Ukrainian society to install the current Kiev regime. Both the European Union and the United States had interests in Ukraine, albeit somewhat diverging. While the EU saw Ukraine as a perfect opportunity to significantly enlarge its area of neocolonial exploitation, the US saw it both as that and unmatched strategic leverage against Russia.

With Ukraine under firm Washington control, the concept of mutually assured destruction (MAD) would’ve been severely undermined by giving the US a clear advantage, forcing Russia to either effectively capitulate or escalate. The Pentagon strategists were especially happy with this turn of events, regardless of how many Cold War-era pundits, former military and government officials advised against this extremely dangerous, almost suicidal approach.

For its part, the Russian establishment realized it would be cornered if this were to materialize. Moscow decided to act decisively on February 24, launching its special military operation in order to drive NATO further from its western borders, as well as to prevent the complete loss of Donetsk and Lugansk People’s Republics. Russia’s intervention proved that the Kiev regime forces, albeit significantly enlarged and modernized, were no match for Moscow’s superpower military. Seeing how fast its project in Kiev would crumble, the political West reacted by sending billions of dollars’ worth of weapons, in addition to mobilizing its massive propaganda machine to create an image of “Ukrainian defenders fighting off Russia’s completely unprovoked brutal invasion.”

Russia’s BTGs (battalion tactical groups) took control over large swathes of land in mere days, helping shape the field of battle to Moscow’s liking and setting the stage for the most important aspect of the special military operation – demilitarization. As the fighting started turning into a classic example of attrition warfare the political West realized that Russia will most certainly prevail. The US and NATO understood that only constant weapons shipments could keep the Kiev regime forces afloat. Still, despite the Western propaganda machine trying to portray these weapons as the new “wunderwaffen”, the Neo-Nazi junta’s experience fighting the Russian military with the said weapons painted a much less flattering picture.

In order to tackle the issue of the Kiev regime’s incompetence, the US decided to take even more control of the situation and how military assets sent by the political West were being used. This has turned Ukraine, already a prime example of US neocolonialist foreign policy, into an almost direct US colony. The much-touted offensive in the Kherson oblast illustrates this perfectly. The offensive didn’t only fail before it even began, but it’s also clear that the US needs it much more than the Kiev regime itself. The Neo-Nazi junta lacks soldiers, weapons and logistics to launch any sensible offensive. In addition, the Russian military enjoys air superiority, making any such attempt suicidal at best.

Still, the United States, and above all, the troubled Biden administration, is in desperate need of even a semblance of victory as the midterm elections are mere months away. The US government needs to demonstrate just how “successful” its Ukraine policy is. The problem is that there’s nothing good it can use to create the illusion of success. The current US global standing, coupled with an increasingly difficult domestic situation poses a significant threat to the Democratic Party, which desperately needs anything to show that the Biden administration’s policies, both domestic and foreign, are beneficial for the US.

To accomplish this goal, the US is “increasing its presence” in Ukraine. The notion that its money will be embezzled by the corrupt Kiev regime officials and its “lethal aid” sold on the black market is making the Biden administration especially uncomfortable, as this will very likely create even more problems and further damage the already shaky reputation of the current US government, to say nothing of the negative consequences for its Ukraine policy. To tackle this issue and since it’s unsatisfied with the “military successes” of the Kiev regime forces, the US is establishing its own military command which will control the course of military operations conducted by the Neo-Nazi junta forces. This also includes the distribution and use of American and other Western weapons supplied to the Kiev regime forces.

The changes in policy are not only affecting the military, but also the government institutions. Exercising even more control over the actions of the Kiev regime government, increasing the presence of numerous foreign-backed NGOs, as well as sending US corporate advisers and representatives are all actions which aim to tighten the US neocolonial grip. In this way, even the local operational decision-making is being taken away from the regime and relegated to the US embassy in Kiev. It is precisely this neocolonial policy (nearly a carbon copy of the one carried out in Africa, Latin America, the Middle East, etc.) that is pushing the Ukrainian people into a protracted and bloody conflict with Russia, one they cannot hope to win.

… And Russia appears only too willing to accommodate them by continuing a business relationship with the Yankee D”00″dle Zi0ni$t – https://southfront.org/america-imported-over-6-billion-in-goods-from-russia-since-ukraine-invasion/ that continues to bring terrorism to it’s Country…

Perhaps unlike the men fighting and dying to protect and defend their Nation from this kind of “commerce” with the guilty parties and perpetrator in North America, U.K. and EU THIS – https://www.reuters.com/world/europe/chairman-russian-oil-producer-lukoil-dies-after-falling-hospital-window-source-2022-09-01/ will also be happening to the ex-KGB officer that is the titular head.

Time for a change at the Kremlin!

i hope they all drink coffes in nazi ss kiov in a big boom and went f off forever !!!

I put dick in anybody’s anus

You just admit that you’re a disgusting fag.

Direct quote from the ol’ warmonger.

The US military can now employ its Trans freak officers in Ukraine.

kind of ironic that the Transcarpathian special forces battalion that got slaughtered was trained by the british, in britain… are brits as gay as americunts

Joe Bidet Is A Senile Pedo
Reply to  max_leer

What makes me laugh is when I see headlines here in the UK media about the likes of Sweden and Estonia sending military trainers to Ukraine. What wars have they ever been seriously involved in the last few hundred years FFS!

UK France Poland are all very heavily enthusastic to destroy Ukraine and Russia.

I want to heavily enthusiastic in pleasure destroy your o-ring

US is a cancer the is being eradicated as we speak. I grabbed the popcorn 🍿 long ago.

Good for Russia and its preemtive special military operation in Ukraine. If a tiny, welfare funded, banana republic like Israel can preemptively attack whomever they want in the Middle East claiming self defense, so can Russia.

I suck your dick for ruble

there is only ONE COURSE left for Russia and that is TOTAL ANNEXATION OF UKRAINE into Russia to STOP the Rogue terrorist nation the USA and NATO from EVER being in Ukraine ever again. First and foremost is ODESSA needs to be taken to land lock NAZI UKRAINE totally and then onwards to KIEV. =Z=

The U.S government has gone insane, this is not the fault of the american people they’re so full of garbage propaganda that they don’t know what’s actually going on.

Is Russia at all in Ukraine? ” “US tightening its grip over Ukraine”. Meaning all the war reports about Russia took over Ukraine in 4 month was pure bs yes?? Fake news! The truth was that US tightened its grip around Russia’s balls and Russia ran home again. I think this public deserves an answer, the truth!!

The only one i saw run was the collective west first from Afghanistan then from Kiev and back and away again. Also i see western leaders running around like headless chickens not knowing where to get the energy and food from,afraid of being lynched by their own lol.

Joe Bidet Is A Senile Pedo
Reply to  Tommy Jensen

Put down the crack pipe you deluded idiot and do try to spend some time outside of mummy’s basement!