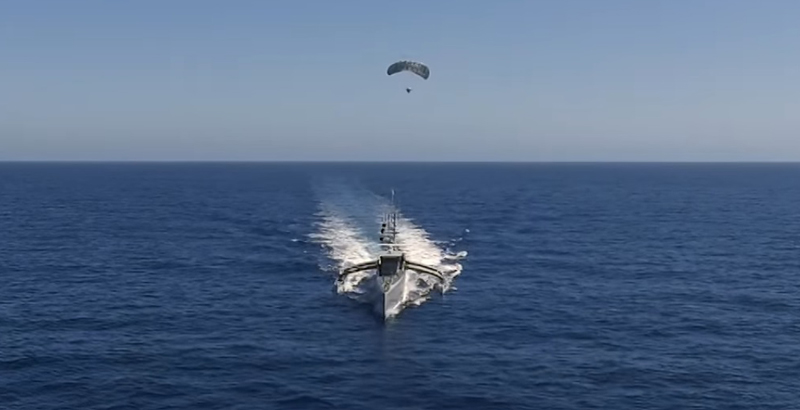 The Defense Advanced Research Projects Agency (DARPA) of the US Department of Defense has tested a low-cost elevated sensor mast, developed through the Agency’s Towed Airborne Lift of Naval Systems (TALONS) research effort, the official website of the DARPA reported. According to the website, the continuous trail unmanned vessel (ACTUV) was used as a base during the tests.

“The TALONS prototype started out from its ‘nest’ installed on the back of the ACTUV vehicle. It then expanded its parachute and rose to an altitude of 1,000 feet, where it tested its onboard sensors and communications equipment,” the article reads. “While aloft, TALONS demonstrated significant improvements to the range of the sensors and radios it carried compared to mounting them directly on a surface vessel. For example, TALONS’ surface-track radar extended its range by 500 percent – six times – compared to its range at sea level. Its electro-optical/infrared scanner doubled its observed discrimination range. The TALONS team plugged in a commercial handheld omnidirectional radio; that radio’s range more than tripled.”

According to the DARPA, this combination can lead to the development of unmanned vessels that will be capable not only to sail during several months, but also detect potential threats long before they come within range of defeat.

Now, when the demonstration is successfully completed, the agency hands the project to the US Navy because various reworks will be certainly required to achieve a combat readiness.

However, according to experts, it is not the case, when a military technology needs years to find a use in the armed forces. They also noted that the tests were conducted less than 3 months after obtaining permission to hold it.

It is unlikely that unmanned vessels will enter service to the US Navy in the near future, but the elevated sensor mast on a parachute will appear on manned vessels very soon, the DARPA’s official website concluded.

Excellent concept , lots of room for improvement ! An Iranian version of the RQ 170 , on a tow line to a fast naval launch ,or air craft , ready for self propulsion in case of attack . Small , light , and best of all , replaceable