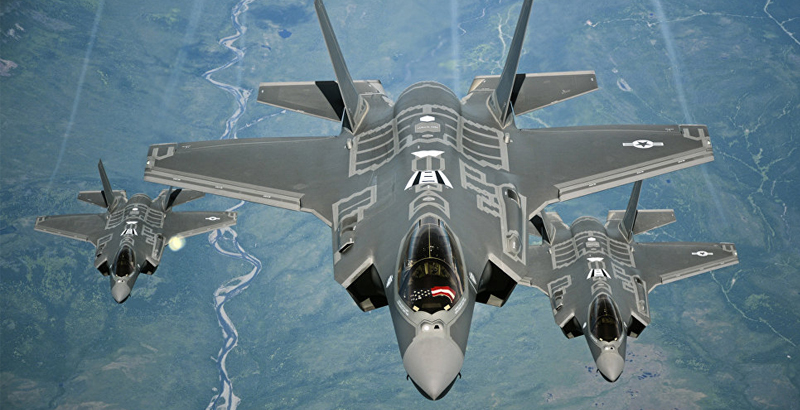 The US will deploy several F-35A Lightning II multi-functional fighter-bombers to Europe in order to conduct planned military exercises, the Inside Defense information portal reported, citing a press release of the Pentagon.

“The aircraft are scheduled to conduct training with other US and NATO aircraft, based in Europe, for several weeks as part of the European Reassurance Initiative,” the press release reads.

As an officer of the US Air Force, Mark Graff, told the Anadolu news agency, from six to ten F-35As will be deployed in the UK.

The deployment will be conducted within the framework of the program of guarantees to the European allies, which was started by the Barack Obama’s administration under the pretext of combating “Russian aggression.” According to the US Military Department, the exercises will allow demonstrating the capabilities of the fifth-generation aircraft. The press release also noted that the Pentagon plans to permanently deploy the F-35s to Europe in the early 2020s.

Earlier, it was reported that Washington also has plans to deploy the F-35 fighter jets in the Middle East in the near future in order to fight the Islamic State terrorist group there.

In January 2017, it became known that the US for the first time dispatched the F-35 fighter jets to serve abroad. A squadron of the Marine Corps was deployed on the US Iwakuni military base, located in the southern part of the island of Honshu in Japan.

In February 2016, head of the US Air Force’s Combat Command, General Herbert Carlisle, said that Washington intended to deploy the F-35A fifth generation multifunctional fighter jets n Europe. He noted that the deployment might be expected in the spring or summer. The General also announced the US intention to deploy these aircraft in the Pacific Region and the Middle East.

The F-35 Lightning II is a family of promising stealth multifunctional fighter jets of the fifth generation, which was developed by the Lockheed Martin Corporation. The fighter jet is being built in three different main versions: the F-35A (the conventional model for the Air Force), the F-35B (the short takeoff and vertical landing (STOVL) variant for the Marine Corps) and the F-35C (the carrier variant for the marine aviation). The first squadron of the F-35B for the Marine Corps aircraft reached its combat readiness in August 2015, the F-35As for the US Air Force were ready in August 2016.

Well boys and girls at the Pentagon, it is time to see how good these gazillion dollar aircraft are. Fly a few missions near Kaliningrad and see what kind of a response you get. Would be interesting.

Surprised they got them to fly!

Attrition47
Reply to  so

1 hour flying many hours of maintaining

The NATO forces will be told, ‘ Buy these turkeys or we will leave Europe’.

Lol, they aren’t even ready for combat yet. How is this meant to send a signal to anyone?

Is it true the computer software can be hacked allowing the hacker to control or crash the plane?

EU is the personal piggy bank of the US arms industry. They can just order the vassals to buy anything to narrow the US trade deficit, including a flying pig such as this one.

ALL attack aircraft, and tanks, are needed to fight Daesh! There must be NONE in Europe!