The US forces have strengthened protection of its troops, deployed in Syria, after US missile strikes on a Syrian airbase. 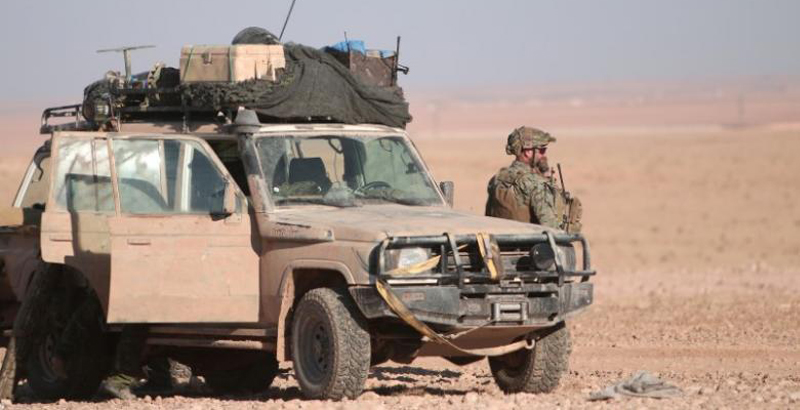 US military have made slight adjustments to its actions in Syria in order to strengthen protection of US troops after striking a Syrian airbase, the Reuters news agency reported, citing US officials.

The news agency’s sources, who wished to remain anonymous, refused to provide more detailed information. One of the officials noted that the missile strikes, carried out by the US against the Syrian airbase, had not slowed down the ongoing campaign against terrorists of the Islamic State (IS) group.

Later, during a news briefing, when Pentagon spokesman, Colonel John Thomas, was asked about the Reuters report, he confirmed that the US commander, appointed for the campaign, has been “calling in the resources that he needs” in order to protect the US forces after the missile strike.

Thomas also noted that the US strikes in Syria had become more defensive, as well as acknowledged the fact that the pace had slowed somewhat since last Friday.

“I don’t think that is going to last for very long, but that is up to [Lieutenant General Stephen] Townsend,” the Pentagon spokesman said, pointing out that there still had not been any attempts to retaliate against US troops by Syria or its allies.

On the night of April 7, the US Navy fired cruise missiles from its ships and struck the airbase in the Syrian province of Homs, claiming that in early April, Damascus allegedly carried out a chemical attack on the province of Idlib from this airfield.

At the same time, Washington did not provide any evidence of these accusations and did not heed Russia’s call for a thorough investigation before accusing the Syrian authorities, who categorically rejected the fact of the usage of chemical weapons, saying that it had long ago been exported from the country’s territory through the Organisation for the Prohibition of Chemical Weapons (OPCW).

According to the Pentagon, in total, 59 missiles were fired. The Homs governor said that seven people, five servicemen and two civilians from a village, located near the airbase, were killed. According to the Russian Defense Ministry, two Syrian servicemen were missing, four were killed, and six others suffered burns during extinguishing of the fires.

That missile strike has really played into Russian, Syrian and Iranian hands. Russia is reinforcing their military strength plus Syria’s. Russia did state that they are their to fight terrorism and to protect Syrian sovereignty then when Syria tells the US to buzz off its’ territory the Syrian forces will be prepared to back it up.

Ehh maybe and maybe not. Seems to be more confusion on Russia. Seen some pro SAA saying Russia hasn’t done as enough as Iran or hellbozah. Russia won’t act if US does airstrikes on SAA forces apparently they disregard that statement.

Everyone is entitled to their opinion, whether right or wrong.

US has NO business in Syria. They better leave before they get hurt

AR-15 for ARII
Reply to  Thegr8rambino

ISIS declared war on U.S. civilians. ISIS sits in Syria. U.S. has every right to be there. Result: ISIS will continue to get hurt, and hurt badly.

Wrong. ISIS is not internationally recognised country with their own territory (in fact, exactly zero countries recognised ISIS). The territory they current occupy legally belongs to the Syrian Arab Republic. If they [US] have a grudge with ISIS, the correct way would be to ask Syria for permission to operate inside their territory, which the US failed to do. Even then their operations would have to be coordinated with the Syrian government according to any such agreement.

The current state of affairs is that US as well as their allies conduct military operations without permission of Syrian government, which is a breach of international law. Intentionally targeting Syrian military assets without declaration of war and/or without UN resolution is even more severe breach of international law, which means that Donald Trump is now officially a war criminal.

Wrong. Go read Article 51 of the U.N. Charter (the right to self-defense). The facts are clear: ISIS controls large swaths of territory in Syria. ISIS has declared war on U.S. citizens, and has already murdered a number of them. The Syrian government is unwilling or incapable of stopping this. The U.S. has every right to be in Syria.

They have absolutely zero rights to be there, and the Syrian armed forces have every right to conduct airstrikes on US troops inside the Syrian territory, and to add up even more, the US has no right to retaliate when that happens because Syria would be acting in self defense in that case.

Jonathan Cohen
Reply to  That Guy

javier
Reply to  AR-15 for ARII

yes except it has been shown the largest opposition to isis and al nusra is the syrian government, indeed israel has treated thousands of isis injured while the US flys air support for IS and nusra, you idiot

goingbrokes
Reply to  AR-15 for ARII

If US was acting in self-defence in Syria, they would get the government permission to go after IS, perhaps even co-operate. But that is not why they are there. They are there to partition Syria, and they have been seen many times supplying ISIS. Using UN self defence clause is on very weak ice in Syria – a fig-leaf at best. More like a bully-boy’s “whaddaya looking’ at?” excuse!

Deploying military units in other sovereign country’s territory is NOT self-defence, especially not if one’s nearest territory is thousands of miles away.

Your just a war monger hiding behind lies of the Jews. Who have bent Trump over ….and now He is their Shabbos goy.

You can live with that. …the humiliation matters not,….only War And destruction.

Also, Israel attacked the USS Liberty and killed many Americans, so by your logic it is time to invade the Zionist-regime of Israel and save the earth from their illegal nuclear arsenal.

But not to attack SAA or defend Al Qaeda, only to attack ISIS and only far from the SAA

Bullshit. ISIS are mainly mercs paid $100 a day mostly from poorer nations. They were recruited, trained, supplied and deployed by US, UK, and Saudi Arabia, and their terror was dramatized by the press, to pick up the slack of the other paid insurgents who were dragging their asses. Once the West stops paying them they will fade into the woodwork.

EmilyEnso
Reply to  AR-15 for ARII

javier
Reply to  AR-15 for ARII

Sadde
Reply to  AR-15 for ARII

In that case the opposite is equally true: (U.S. declared war on ISIS civilians. Yankees sits in U.S.. ISIS has every right to be there. Result: U.S. will continue to get hurt, and hurt badly.)

2001, Daniel Bernard came to public attention when, as French Ambassador to the United Kingdom, he was quoted as saying: “All the current troubles in the world are because of that shitty little country Israel.

CIA is ISIS. Founding Fathers warned Americans that the “threat to us will always be the pretense of taking away liberty’s and expanding the military” American by Constitution has no right to be anywhere except within our own borders. It Is ILLEGAL! So says George Washington. Obama and Bush and Clinton and Trump are anti-Patriots. https://www.youtube.com/watch?v=CLgA6jdttJw

But what is to be done with an oppressive religion which views all others as infidels to be beheaded, coverts by the sword, and kills those who covert to another faith. You cannot reason with them without inviting violence.

Thegr8rambino
Reply to  AR-15 for ARII

no, syria has not invited US to fight ISIS, only russia and iran.

But no right to attack the SAA or defend HTS/AQ!

AR-15 for ARII Your opinions are fantasy.

ISIS / IS are assets backed by the Axis of Terror countries owned by the US which include Turkey, Saudi, Qatar who supply weapons, finance and logistics to them

IS – Islamic State continues to stay in place after tens of thousands (probably in excess of 50,000) of US and Coalition bombing raids.

The only rational explanation is Trump nor the US and its Coalition want to defeat IS – Islamic State.

So far, no large force is ever willing to hurt the USSA. Perhaps all of the Big Payers are really in bed with the US. So the US has no reason to even believe for a moment that anyone really wished US invaders any real harm. No one believes their is any real harm to their armies till they loose no less then 100,000 troops, which is still a small amount.

their overconfidence is their weakness

The public in western countries as well as Russia would be up in arms protesting for either all out war or withdrawal if just 1.000 troops or less were lost.

I am wondering how the tomahawks are changing Syrian and Russian deployments??? My guess and advice is that Syria will move towards an HTS/AQ first strategy and reduce offensives on the Daesh front until after HTS/AQ is defeated (like the allied Germany first strategy that really wasn’t). I also expect Russia to send more replacement equipment including replacing the destroyed aircraft and bombs, but less personnel to keep Russians out of harms way (except for air defense near Russian bases). Am I guessing right???

Jonathan Cohen “…replacing the destroyed aircraft…” “…Am I guessing right???…”

Battleplan is not based on guess work, it is based on Intelligence gathering.

The US gave Russia one clear hour of advance warning prior to launching 59 Tomahawk missiles against their targets on Sharyat Airbase in Syria.

Due to the advance warning, all movable working equipment and personnel were evacuated from the airbase to minimize losses.

Only 23 out of 59 Tomahawk missiles reached the Sharyat Airbase in Syria of which many were ineffective and only 6 faulty non operational Mig 23 Jet Fighters were lost.

The Mig 23 losses are just a fraction of the air power of the Syrian Air Force which has approx 450 Russian-made jet fighters such as Mig-23, Mig-25 and Mig-29 military aircraft.

I didn’t suggest they were guessing. I am the one guessing. So replacing 6 mig 23s shouldn’t be too tough for Russia then, especially faulty ones. Though if they can’t fly then that might complicate transport.