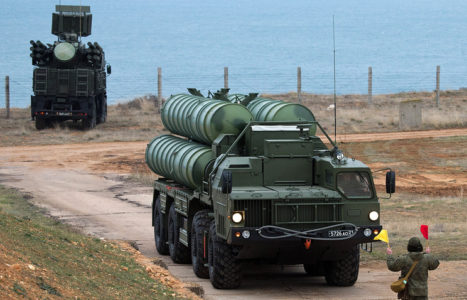 On June 26, the US State Department once again announced that Turkey would be targeted by sanctions if it receives S-400 air defense systems from Russia under a contract signed by Ankara and Moscow earlier.

The State Department recalled that this decision is a result of the bill President Donald Trump signed into law last summer, which seeks to punish companies that do business with the Russian defense industry.

“We made it clear that if Turkey buys S-400s… there will be consequences. We will introduce sanctions within Countering America’s Adversaries Through Sanctions Act (CAATSA),” Assistant Secretary of State for European and Eurasian Affairs Wess Mitchell said at a hearing of the  Senate Foreign Relations Committee.

“We believe that we have existing legal authorities that would allow us to withhold transfer under certain circumstances, including national security concerns,” he said. “We believe that we continue to have the time and ability to ensure Turkey does not move forward on S-400 before having to take a decision on – on F-35. We’re being very clear in our messaging to the Turks that there will be consequences.”

The imposed sanctions would also block deliveries of the F-35 stealth fighter jets to Turkey under a contract between Ankara and Washington. Turkey formally received a first F-35 jet on June 21. However, the jet remained in the US. According to Foreign Minister Mevlut Cavusoglu, no F-35 jets will arrive Turkey until 2020.

Thus, the US has lots of time to block the F-35 contract punishing Turkey for the decision to buy S-400 systems.

Turkish President Recep Erdogan and his Russian counterpart Vladimir Putin said on April 3 that they had agreed to expedite the delivery of S-400 systems. The delivery would start in late 2019 and early 2020.

Nobody listen to poor America any more. Very sad.

And these ludicrous Acts are made by a bunch of sick, white haired ZioNazi pedos that sit in house all day doing as much as they can to display their loyalty to their global Masters. When 1000 palestinian women and children are slaughtered by the Zionist war machine they hardly stir, or bat an eyelid . .

This is to protect Israel.

It secure the attacks of US backed terrorist Israel on other countries.

yes S-400 in Turkey may constitute a threat to the greater Israel (Yinon plan). US is serving Israel together with Anglo-Saxons.

Hisham Saber
Reply to  as

Of course it is all about Israel.

And the F-35’s Turkey is to get from the U.S. have back-door software programs that can render the aircraft unflyable by way of satellite hack. Same sort of technology used to hack the aircraft on 9-11. And also MH-370. Boeing deliberately places codes on newer, 777’s. 787’s etc hackable back-doors on all aircraft. This is by order of the U.S. CIA, Pentagon.

China and Russia need to accelerate the joint civilian airliner program they signed off on a few years back. Technically, the U.S. can hack any airliner flying today. Im sure Airbus has the same protocols and measures in place. Therefore, its dangerous for Presidents Rouhani, Xi and Putin to fly on such planes, lest they fall prey to foul play.

“.. that can render the aircraft unflyable by way of satellite hack. Same sort of technology used to hack the aircraft on 9-11. And also MH-…” What do you mean? Did the usa ground all aircraft in the us via a hackcode to prevent further planes crashing into buildings? Why not hack the one that went into the Pentagon etc?

Please stop responding to my comments. You make no sense, you are dense and most likely juvenile.

Wow! You are still butthurt because i said hardcore moslems think Allah only refers to their God.

Now who is dense and juvenile.

As for making sense ,most people here say i do make sense so i think you need to look in the mirror.

As my Lord said to me “do not bother throwing pearls before swine”. It is my fault for expecting all Arab Christians to have more brains than hardcore Moslems.

This is my last communication to you.

Busted!!! You are not a Christian Arab at all! You are a butt-hurt Sunni Moslem who got caught out!

“Remember, there are about 1.3 billion Muslims, with about 1 billion what you would call Sunni (I am one, but I don’t differentiate) and as the Islamic world is alienating them, Saudia Arabia is declining as a major regional Muslim player. It has been ousted from its supposed inherent role as the custodian of Islam, by Iran, which offers a better civilizational model for Muslims, whatever school of thought they happen to be, Sunni, Shia, Sufi etc.”

The US is changing the rules of the game quite frequently, dictating ”you can do that, now you can not do that”… how long can they sustain this before the rest of the World jointly start to resist being bullied?

Only corrupt leaders could listen to US dictations.

Unfortunatley, there are far too many of these corrupt leaders all over the world who still take dictates from Washington D.C.

Small corner of the world still missing more leaders from GCC and Africa.

ok but sometimes even though you are not corrupt, you may be forced to obey to what US dictates (financial or other leverages).

Those that destroy their own life and of their future generations will listen to US and Europe.

Turkey needs to stop paying any money for the F35’s, the longer they do this the greater leverage the US will have over Turkey.

Even the blindest of people in the NATO countries must be able to see what the Mafia US has been doing for decades.

They have been de facto occupying Europe with military bases since WW2 and engaging in a protection racket for US weapons manufacturers.

Buy our very expensive weapons that often do not work very well or we will create problems for you :)

Spot on there Florian, it is difficult though for those followers of the bully US to break the habit, it takes a certain amount of empathy, honour and common decency! Oh yeah, well obviously they lacked it from the onset!

Shut up John; you are sanctioned.

Now my feelings are hurt….

LOL. I have been ordered by the Yanks to take you off THE list.

All true yet the leaders of those countries are either weak or bought and will never break with the us unless their citizens rebel.

O Muslims! Turkey is our friend and protector of Islam. No matter what the enemy media continues to propagate, the reality must be crystal clear as you remain witnesses to everything. Do not believe what the media says rather rely on your own intellect and acumen. The Mujahideen of Islamic state only want that your lives are radiant with the commands of the Holy Quran and you are provided with quality education, Shariah based system, freedom, dignity, honor, peaceful life and the future generations rescued from the damning effects of the disbelieving occupation. We consider both religious and modern sciences essential for the success of the Muslims and our Islamic society. With the help of Allah (Swt), we have established exemplary peace in areas under our control (Mosul, Raqqa…) and have taken steps for the ease, education and progress of the people with all available means at our disposal. https://cdn.images.dailystar.co.uk/dynamic/1/photos/190000/620x/salman-abedi-isis-616833.jpg

You zionist liar, the truth is different watch this, you deluded moron: https://youtu.be/Sbb5n646J2Y

Please don’t make fun of their camel urine drinking it’s supposed to be healthy for them.

A better figure would be Ibn Wahhab, the founder of these salfist loonies.

Here, here’s a few shekels for your pathetic attempt.

Quite possible that Erdogan will give the S400 a miss and stick to the US, too much to lose if he goes up against them and Erdogan is all talk and he lacks the fortitude and courage.

I think you are right. He will cave in eventually.

He is looking at the walki talki and his brain is becoming frazzled, just thinking, do I press the “on” button. Dumb, inbred, brain dead POS…….He is the walking dead, if he hasn’t been blown to smithereens already.

God bless President Assad and the united County of Syria.

PS As for you, you retarded piece of goat dung, get the fook out of here, you dumb troll.

If these American morons wanted to make Putin’s day, they couldn’t have given him a better present. This will just serve to drive Turkey further into Russia’s camp. Well done, US, well done. Clap clap!

“US State Department Once Again Threatens Turkey With Sanctions Over S-400 Systems Purchase” Good so! :) Push Erdogan definitively in the arms of PUTIN ;)–

If thats the case, good thing that saudi arabia cannot aquire those s400 in the future since saudi kissed uncle sam ass