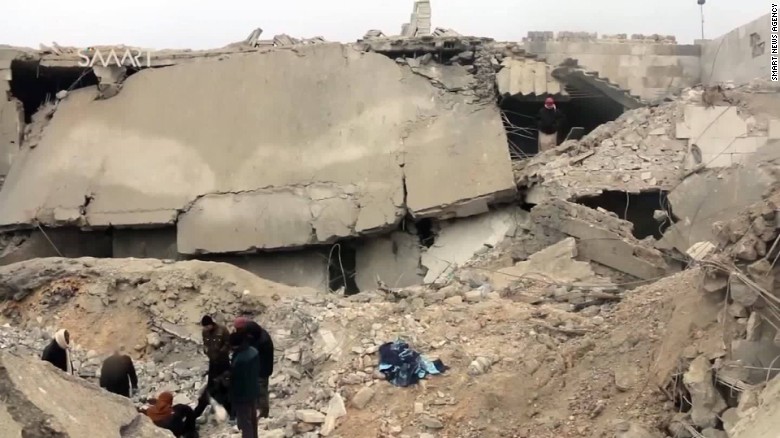 The US Department of State (DOS) offered a grant opportunity for “Promoting Accountability in Iraq and Syria For Genocide, Crimes Against Humanity, and War Crimes,” on April 16th.

Meaning that, for example, the British Institute for Statecraft or the Integrity Initiative are eligible for funding, if they decide to take part. The Atlantic Council is also eligible.

The grant opportunity was released by the DOS’ Office of Global Criminal Justice (J/GCJ) and he Bureau of Near Eastern Affairs, Office of Assistance Coordination (NEA/AC).

“J/GCJ promotes criminal accountability for abuses and violations in Iraq and Syria, including war crimes, crimes against humanity, and genocide.”

The aim is to track such criminal acts and establish a framework, under which such “pervasive abuses” will face justice.

“The investigation and prosecution of atrocity crimes is a crucial part of holistic transitional justice strategies in which countries must address legacies of pervasive abuses. Criminal trials – whether they occur in the context of an international or regional tribunal, or domestic systems that have jurisdiction – can build adherence to the rule of law, reinforce the unacceptability of the crimes committed, demonstrate that impunity will not be tolerated, and deter future harm by punishing perpetrators. Trials can also help transitional societies come to terms with their own histories and rebuild stable, democratic institutions. Evidence presented in court can help to establish a historical record of atrocities, give victims an opportunity to be heard, and rebut denials by victimizers and their political allies that such atrocities ever occurred. Finally, criminal trials can also help to restore the dignity of victims and their families by providing a public acknowledgment of the gravity of the wrongs done to them.”

Those eligible for funding will have to do on-site investigations and present the facts, so that the justice part of the program can be carried out.

“The Department of State will consider funding programs that include components to develop local investigative and judicial skills; to collect and preserve evidence and maintain the chain of custody of evidence; provide information to national authorities with jurisdiction over crimes, and to conduct other activities that directly support investigations and prosecutions of perpetrators of atrocities in Iraq and Syria. Applicants should be able to demonstrate an awareness of existing work in the field.”

It’s especillay interesting, since the side in both the conflicts in Syria and Iraq that is blamed for the most civilian casualties is the US, there is also evidence to substantiate it. Regardless, Washington has maintained that it does everything necessary to protect innocent lives.

“Since the beginning of the conflict in Syria, more than 500 thousand people have been killed. Despite the fact that the Assad regime is responsible for the overwhelming majority of deaths and destruction, many other participants in the conflict committed murder, torture, sexual and gender-based violence and other offenses,” the State Department noted. Thus, the funding will primarily be used to blame the civilian casualties on other parties in an attempt to build a narrative in which Washington is not simply the innocent side, but is also sanctioning others for its forces’ misconduct.

Recently, in February, Syrian state news outlet SANA reported that a coalition led by the United States had committed a crime against humanity by inflicting air strikes on the Al-Baghouz settlement. As a result of the bombing, 16 civilians were killed, another 70 people were injured. Reports of the sort are the norm.

On April 24th, Syrian Defense Minister Mahmoud Shawa called on the dissolution of the US-led coalition in Syria and their departure from the country.

“We demand to stop the illegal presence in our land of foreign troops of the United States, France, Britain, Turkey and disband the so-called international alliance,” the official was cited as saying.

A separate grant offers between $3 and $4 million to public International Organizations; overseas non-governmental non-profit organizations, who would take part in the Iraq-Syria Land Border Security Program.

“The overall aim is to build the capacity of civilian security forces belonging to the Government of Iraq, including the Kurdish Regional Government, and conduct border security management, including enhanced border screening and interagency coordination, in compliance with UN Security Council Resolution 2396. This funding opportunity seeks to address the porous and weakened state of the Iraq-Syria border in order to deny ISIS remnants cross-border freedom of movement and detect and interdict terrorists, terrorist networks and illicit trade.”

This is further evidence that the US plans on perpetuating its presence in both Syria and Iraq, whether by actual US troops remaining there or through their Kurdish proxies in the region.

The Autobots have decided to f7ck nato.

nato scum think, by paying 4.5m of what isnt even theirs, that AlQaeda isnt going to be their worst nightmare.

We will be laughing on Judgement Day, InShahAllah(swt).

Of course, USA is talking about Russia-Syria-Hezbolah-Iran group.

What a load of fooking bllx.

Up to 4.5 million to “prove” that most of the civilian casualties in both conflicts were inflicted by the Iranians and Hezbollah. There, I’ve done it, can I have the 4.5 million now?