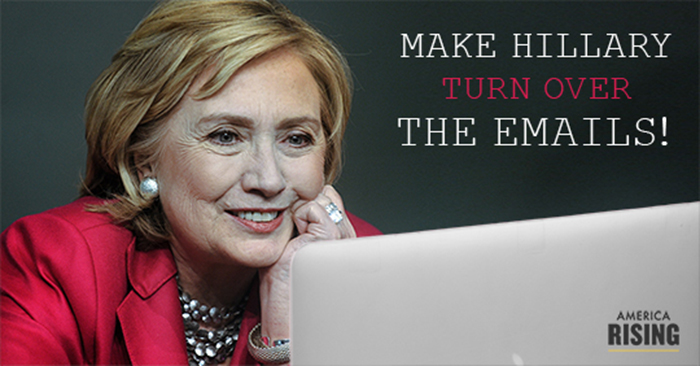 Attention to Clinton’s use of a private account resumed in May when the State Department inspector general found that Hillary Clinton never used an official government email address that are generally more secure during her tenure at State from 2009 to 2013. Instead, she maintained a private email server at her home and used her own account.

‘He received a relatively small number of emails from Secretary Clinton sporadically during her four-year tenure,’ State Department spokesman John Kirby told Foreign Policy. ‘As with any other official at the department, having some knowledge is different from having a complete picture of how Secretary Clinton used email.’

The Clinton campaign keeps silence and doesn’t give any comments, but has previously said that Clinton’s use of a private account was ‘not unique’ and she has taken ‘steps to release her records to the public’.

According to Julian Assange, the founder of WikiLeaks, where Clinton’s emails were published, the US attorney general, Loretta Lynch, will not indict Clinton.

‘She’s not going to indict Hillary Clinton, that’s not possible. It’s not going to happen. But the FBI can push for concessions from a Clinton government,’ Assange said.

Media reports underscored the fact of Clinton’s using of a private account in March 2015. However, this didn’t prevent Hillary Clinton to run for the US presidency from the Democratic Party. No one has any doubt that she has almost won the Democratic Party presidential primaries.

What do we have as a result? Federal record-keeping rules were broken, and, according The State Department, nobody is guilty. And it seems this doesn’t bother anyone except the public.

US ‘Concerned about Quality of Democracy in Turkey’

Hillary is a psychopath. She seeks to line her pockets with more millions, and she has not just sold out the American people. Her policies hurt almost every group on the planet. She wants a war against Syria. A war against Russia. She wants a single ruler over all European tribal peoples. She wants to bomb Iran and Yemen. And increase Mi6’s and the CIA’s and Mossads drug trade into Russia and Europe and USA, and allow gays to adopt little boys. Hmm…