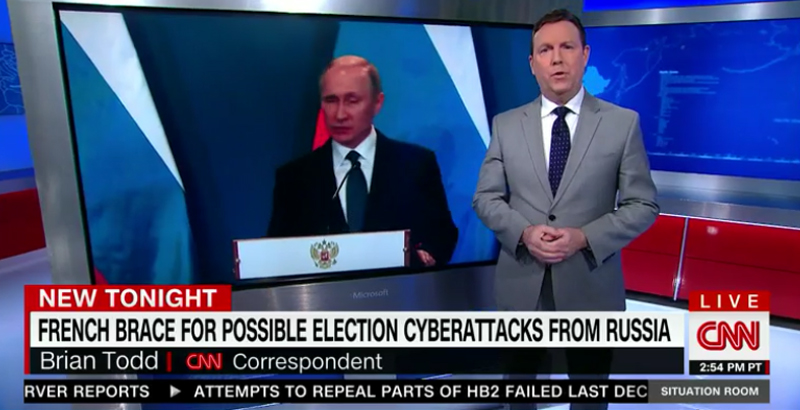 On Thursday, the CNN TV-channel, an unofficial news agency of the US State Department, reported that Russia intends to influence another national election, this time in France, where it will take place in April.

The CNN’s reportage, titled ‘With a vote coming in April, could French elections be targeted by the same Russian hackers accused of meddling in the US campaign?’ was almost identical to the previous claims of a ‘vast Russian conspiracy’, influencing the US election and the victory of President Donald Trump. There is only one difference between the US and French elections – this time CNN is attempting to get out ahead of an election rather than responding to the outcome therein.

In fact, the TV-channel and State Department officials, remaining within the shadow, are trying to influence the French Presidential Race. Blaming the Russians in advance is an attempt to weaken Marine Le Pen. What is a reason for such actions? As InfoWars website noted, “the globalist agents, who carry a vested interest, are simply not willing to concede another loss in their decades long approach toward eliminating nationalist sentiment.”

When their is no real news you just have to FAKE or create it. Has CNN polled Putin about his pick for this election? One vote can make a difference! :)

CNN is not news.The first time I watch their reports on Syria,I knew they are liars.It was in Homs 2012.They used the propagandist named Syrian Danny.

Julian Assange has not been seen at the window of the Embassy in London since around Xmas time. And there are many who think the Yanks got him . So if true we could start seeing CIA/wikiTweeks soon to discredit whatever .

There is very little news just endless propaganda and that is designed to keep us ignorant and untrusting of anyone. They have money to force their agenda so it is the opposition that suffers from lack of truth.

Did Trump and Tillerson discredit this as an utter lie?

The US already claimed that Russia meddled in the UK vote for Brexit – but there is no evidence of any hacking or otherwise interference in the vote by the Russians. Same will be true in France. Putin neither favors one candidate over another nor disfavors the more multi-national candidate over Le Pen. He will deal with whomever gets elected. At this point it is difficult to even know who would be a better partner in world affairs. The US tries that time and again to besmear other nations with its undercover interference in other nations’ elections and internal affairs. See Syria where the US tried very hard to besmear Assad with the murder of so many Syrians when the war was clearly incited by the US-CIA/Mossad to realize a greater hegemony scheme for the US and Middle East hegemony for Israel with a war on Iran. Trump has access to the classified information proving that Russia meddled in the US elections. But there is likely no such proof. Hence the constant harking on Putin to deter from the fact that the US intel agencies don’t have a proof.

Interesting article about relationship between the most influential person of Putin’s inner circle and new US secretary of state. No hacking true but influence might well have been there. http://www.vox.com/world/2017/2/8/14539800/igor-sechin-putin-trump-sanctions-oil-rosneft-tillerson-secretary-of-state-kremlin